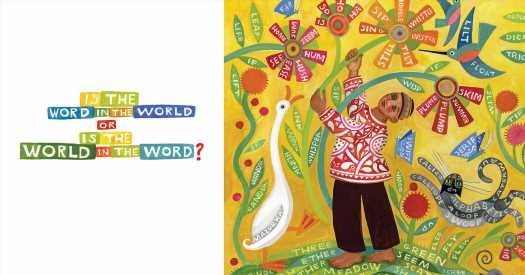 OTTO
A Palindrama
Written and illustrated by Jon Agee

THE WORDY BOOK
Written and illustrated by Julie Paschkis

Words have rescued us. During these strange seasons, amid the silences of public spaces, they’ve provided consolation, helped us stay tuned. We’ve broken quietude in new ways, re-examined what we thought we knew, carried phrases as mottoes, or leverage. Four new books (three picture books and a graphic novel) examine the curiosities of our playful word-life in four very different ways. 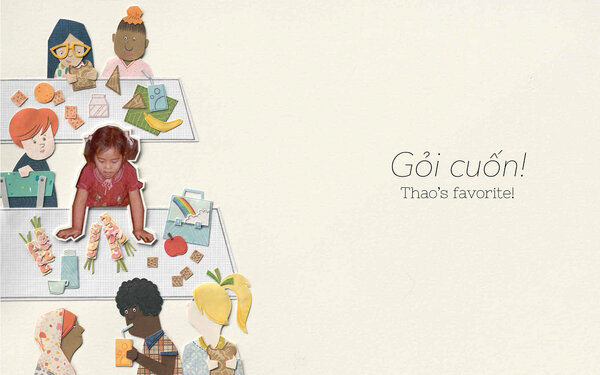 In exquisite collaged art mixed with photographs, and text that’s both drawn and printed, “Thao,” by Thao Lam (of Vietnam and Toronto), considers a very simple four-letter name that is hard for some people to pronounce. “It’s not easy being Thao.” In school, she’s called everything from “Tofu” to “Towel,” and sometimes answers “Here.” For half a day, she switches to “Jennifer” — until she pops open her lunchbox to find her favorite food with a name more unusual than hers. Any child who has suffered mispronunciations or schoolyard rebranding will embrace this book. If you think about it, all names are strange. Some words even have mysterious silent letters. “Not that kind of lamb!”

This book could be a perfect launchpad for classroom explorations of everybody’s names — histories, linkages, other words living inside them — as its yearbook-style endpapers suggest. Nothing is “foreign” if you take time to know it, and the deeply touching “Thao” soars through its eloquent understatement of this truth.

In Jon Agee’s spectacular “palindrama,” “Otto,” a daydreaming boy travels far looking for his mischievous pup, Pip, who has dashed off from a beach. An utterly wacky graphic novel written entirely in palindromes — words or phrases that read the same forward and backward — it is packed with oddball characters, startling dialogue and surprising settings. We witness a valiant boy hitchhiking by himself, jumping into vehicles with eccentrics and wandering a big city solo. In this book it somehow feels OK. Otto’s brave! He never complains! The pup must be found! A man on the street holds a sign: “Do geese see God?” An elderly lady in a boat hands Otto an oar and announces, “No word, row on.” Even the modern art museum (with its “Koons Nook” and “Moore Room”) and the cemetery (with gravestones such as “Tori Wong — Now I Rot”) are funny.

What’s particularly charming is that, kooky and far-fetched as Otto’s journey may seem, the gripping tale reminds us of daily life — especially the peculiar lives we’ve been leading recently. One thing whips into another, one trouble explodes into three. And 200 palindromes in quick succession turn the brain a bit inside out. It was a relief to learn, at the end, that Agee didn’t dream up all the palindromes himself. News of a real-life World Palindrome Championship was its own surprise. Even a reader who has never before thought of palindromes will emerge from this triumphant book exhilarated, looking for them everywhere (and dream of having a conversation with Agee). No matter that the ending is a wee bit of a letdown — Otto must be exhausted after all that action.

“My Monster Moofy,” written by Annie Watson, with fanciful pictures by Eric Zelz, attempts to teach figures of speech through descriptions of a nondescript cat, Moofy. Children may be confused by the fact that — depending on the type of comparative language the girl narrator uses — sometimes he’s orangeish and other times he’s grayish or brownish. (Is that the same cat?) Especially if they’ve missed Watson’s example of a “simile using like”: “There’s a monster under my bed who changes like a chameleon.”

It’s true that the lists and definitions of figures of speech (alliteration, metaphor, allusion, onomatopoeia, etc.) traditionally distributed in English classrooms have felt burdensome for generations, so one appreciates Watson’s desire to enliven the lesson. The problem with “My Monster Moofy” is that the illustrations and actions feel appropriate for very young children while the definitions are better suited for an older age group. Sure, 6-year-olds are making metaphors almost every time they open their mouths, but will pointing that out in a teaching way encourage or hinder them?

Unfortunately, the language here also tends toward the clunky. For oxymoron (“two words that make sense side by side though they have opposite meanings”): “He may be a tiny monster, but he causes predictable chaos and beautiful destruction on every adventure.” So many syllables in each of the examples!

For paradox: “The only thing that’s the same about Moofy’s many disguises is that they’re all different.” The little girl writing in a big beautiful notebook on the cover is a positive vote for trying things out, not being stuck with single descriptions. Third or fourth graders, already deep into writing, may appreciate this book most.

Some children’s books feel like classics the first time one encounters them. “What does a word think about?” the artist and writer Julie Paschkis asks on the first double-page spread of “The Wordy Book.” This and other evocative questions — such as “When does then become now?” and “Is the / word in the world / or / is the / world in the word?” — punctuate a dazzling array of richly colored, riveting paintings.

Folkloric and elegant, this book invites slow, meditative drifting. Paschkis is the illustrator of more than 25 children’s books, including “Pablo Neruda, Poet of the People,” and her poetic sensibility girds every page. Absorbing layers of waves, leaves and petals, boats, birds and people, all threaded with words, sustain the magic of her visual language. The whole head full of “maybe,” with the word “yes” repeating inside a smaller head, is a miracle of whimsy and wonder. An engaging author’s note reminds us that “a word can be savored for its sound and shape as well as for its meaning” and that “the meaning can be fluid.” It’s not hard to imagine young poets embracing “The Wordy Book” as warmly as new generations keep embracing “The Little Prince.”