Breaking News
Song You Need to Know: Ali Gatie, 'What If I Told You That I Love You'
Marvel Studios Reportedly Bringing Spider-Gwen Into the MCU for a Solo Movie
Taylor Swift’s eating disorder made her starve until she was dangerously thin
Spluttering Eamonn Holmes ‘probably suffering from coronavirus’ on This Morning
Skip to content

How do you capture the realities of climate change in a novel — not just its causes and symptoms, but the ever-changing, ever-weirder ways it is manifesting, within the conventional framework of a story with a beginning, middle and end?

Answering that question is, according to the writer Amitav Ghosh, the literary world’s great challenge. “I feel completely convinced that we have to change our fictional practices in order to deal with the world that we’re in,” he said.

“Something this big and this important, there have to be an infinite number of ways to just talk about it,” he said, similar to how war, slavery, colonization, famine and other crises and events have seeped into so many forms of literature.

Ghosh, 63, is attempting to add something to the conversation with “Gun Island,” his 12th book. The novel, which comes out Tuesday, leaps from the United States, to the Sundarbans mangrove forest between India and Bangladesh, to Italy, places where rising temperatures and water levels have uprooted human and animal lives and upended political systems.

It centers on Dinanth Datta, a rare book dealer also known as Deen, who reluctantly sets off on an Indiana Jones-esque trip to a temple in the Sundarbans, seeking clues to an ancient Bengali legend. That visit thrusts him into an adventure that connects him with Bangladeshi migrants in Libya, dolphins in the Mediterranean and venomous water snakes in California, while touching on migration, xenophobia and technology.

In his 2016 nonfiction book of essays, “The Great Derangement,” Ghosh wrote about his ancestors, “ecological refugees long before the term was invented” who lived on the shores of the Padma River in what is now Bangladesh. “One day in the mid-1850s the great river suddenly changed course, drowning the village,” he writes. “It was this catastrophe that had unmoored our forebears.” 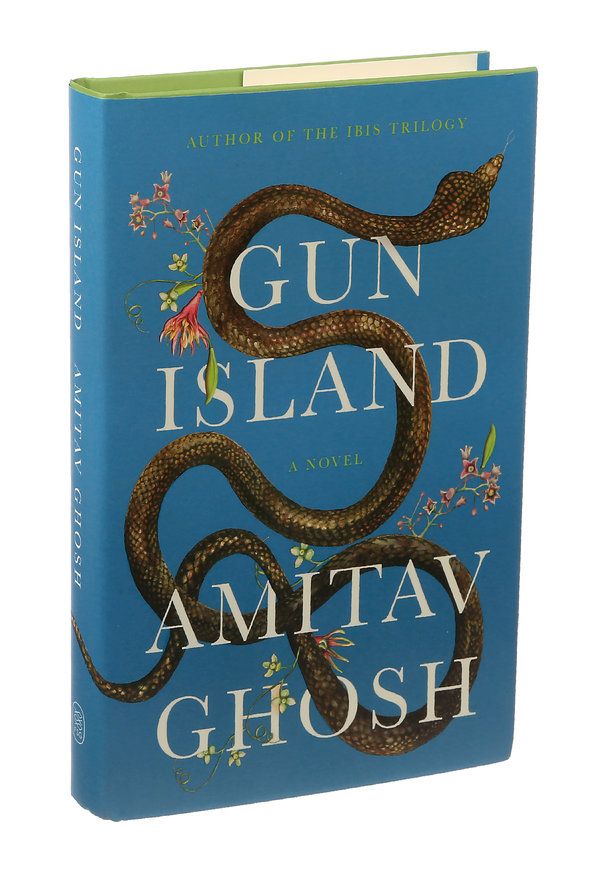 About a century later, Ghosh was born in Kolkata, a city that sits near India’s border with Bangladesh and serves as the starting point for Deen’s journey. Ghosh’s life, like Deen’s, has stretched across countries, from India, Sri Lanka and Bangladesh to Britain and eventually the United States, where he now lives.

While studying in New Delhi in the late 1970s, Ghosh experienced a tornado and hailstorm — phenomena previously unheard-of in India. He struggled to incorporate the episode into his fiction because, as he explained in “The Great Derangement,” it is difficult for a writer to use a case of “extreme improbability” without it seeming contrived.

Ghosh came up with the idea for “Gun Island” in the early 2000s when he was researching another novel, “The Hungry Tide,” that explores the rivers of the Sundarbans, whose ecosystem supports the endangered Bengal tiger and thousands of other species. But Ghosh could already see the impact of climate change: bigger waves and worsening cyclones that hindered farming. That shift, over the years, has directly or indirectly forced a sizable number of the four million inhabitants of the Sundarbans to flee to parts of India and Bangladesh.

“Gun Island” is likely to resonate in Italy, said Anna Nadotti, his friend and Italian translator of over 30 years, as the country grapples with an influx of migrants fleeing war, persecution and climate crises. “Politically, socially and also culturally, it’s important to give people all the means to understand what is really happening, why all these people are coming,” she said.

“Even if sometimes in ‘Gun Island’ Amitav invents, nothing is fictional,” she added, pointing out a scene from the book that is familiar to many Italians: a boat full of migrants, stranded at sea because it has been denied permission to dock.

At one point in “Gun Island,” Deen arrives in Los Angeles for an antiquarian book dealers conference at a museum. Wildfires burn nearby. The conference, at first, goes on. But soon, the bibliophiles, librarians and book dealers are told to evacuate because the winds are changing direction, making the blaze’s path increasingly unpredictable.

It seems to mirror when fires came perilously close to the Getty Museum in Los Angeles in 2017, raising concerns they would destroy the artifacts inside. Ghosh said he wrote the scene six months earlier.

Later in the story, Deen confronts a freakish hailstorm and fierce “gusts of winds” in Venice. Two months ago, the real-life city was battered by hailstones and winds powerful enough to toss a cruise ship about.

That a novel seems to anticipate some of these unusual weather events is proof to Ghosh that literature should devote more attention to the environment.

“Fact,” he said, “is outrunning fiction.”