According to the National Institute on Deafness and Other Communication Disorders, around three million Americans stutter, and 5 percent to 10 percent of children will develop a stutter in their lifetime. As a child, I did, and still what I want to say sometimes feels as if it’s trapped in a bubble I can’t pop. My tongue loops around the stuck word or phrase, attempts alternate routes. I stare at the ceiling, begging patience with my eyes. A stutter, like other differences, can be frightening and painful because it threatens to isolate the stutterer. To a child, for whom social connection is paramount, this can be terrifying.

In “I Talk Like a River,” the Canadian poet Jordan Scott recalls his own childhood struggle with stuttering. His episodic narrative, told in a few straightforward sentences per page, accompanied by gorgeous illustrations by Sydney Smith, is an empathetic conversation-starter for families seeking help for a young — or not so young — person who stutters. Scott looks 8 or 9 in Smith’s renderings; freckled, with an intense, inward-looking gaze.

In the first pages, he stares out a window, contemplating his anxious relationship with words: “I wake up each morning with the sounds of words all around me./P for the pine tree outside my bedroom window./C for the crow in its branches.” But this is no uplifting abecedary. The story follows Scott from shame and fear to a state not of “fluency,” which implies a cure for stuttering, but, as he says in his short afterword, of self-acceptance and integration.

Smith has found a brilliant visual solution to show how stuttering creates a forced kind of, well, social distance. Working in generously applied water-based paints, he depicts people, rooms and nature with appealing warmth and precision, while also using the paint’s capacity to spread, bleed, run and dissolve to figure the ways speech will and won’t flow, and how the threat of being cut off can actually distort what the sufferer sees.

The most moving art accompanies Scott’s admission that “when my teacher asks me a question, all my classmates turn and look.” One illustration shows a soft, gummy vision of the classroom from the last row: the backs of the students’ heads, the brush strokes of their hair, the patterns on their sweaters. This all shifts in a second picture, which is blurred, almost dirty, the students’ indistinct faces turned menacingly toward the viewer, who sits in Scott’s place and seems to be retreating into himself, the light in the room fading.

The story breathes a sigh of relief when the boy’s father takes him to a nearby river, a metaphor and even a role model for how turbulence and eddying are all part of the natural flow. A particularly powerful gatefold showing Scott’s troubled face across two pages opens out into a wide painting of him wading into the sun-speckled river, just as he is wading deliberately into the uneasy territory of his stutter. 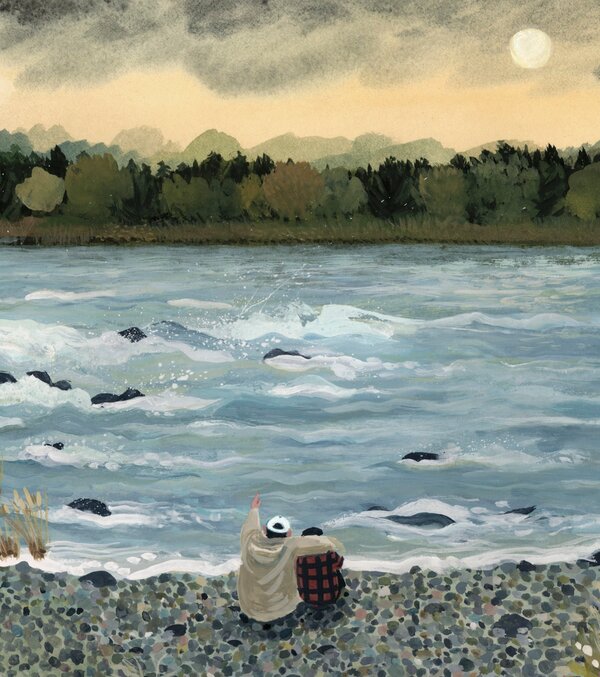 Before we know it, two pages later, he is swimming: “When the words around me are hard to say, I think of the proud river, bubbling, churning, whirling and crashing.” The painting on this page has a bit of everything that’s come before: a shaded and shadowy body, bright flecks of bluish white to depict the water bounding against the boy’s swimming strokes; greens, blues, grays and gentle reds, the colors of a challenging and beautiful life.

If I’d had a book like this as a kid, I would have been a lot less afraid to open my mouth. While it won’t cure stuttering itself, “I Talk Like a River” may go a long way toward healing the sense of isolation that is among its most painful effects.

Craig Morgan Teicher is a poet and critic. His latest book is “We Begin in Gladness: How Poets Progress.”