When describing his new book, “Memorial,” Bryan Washington has called it a gay slacker dramedy, a lowercase love story and a novel about the creases in relationships.

But in September, during a video interview from his home in Houston, he confessed that at times he is winging it.

“I was sort of spitballing different descriptions and throwing things at the wall,” Washington, 27, said. “I liked the idea of the dramedy because what would you call a dramedy? See, nobody knows. So I can just say that and people will have a feeling or an emotional sphere through which the narrative will be, but they won’t quite know. So they can’t quite call [expletive] when it isn’t the thing that they perhaps expected.”

It’s an explanation that matches him: a little guarded, but also funny and considered.

So what, then, is “Memorial” about? It focuses on two Houstonians — Benson, a Black day care teacher, and Mike, a Japanese American chef — in a romantic relationship that may or may not be working. It is further complicated when Mike leaves for Osaka, Japan, where his father is dying of cancer, just as his mother, Mitsuko, arrives in Houston for a visit. She and Benson, who haven’t met before, are left, awkwardly, with each other.

Riverhead will publish the book on Oct. 27. A24, the indie distributor behind shows like “Euphoria” and “Ramy,” has already acquired the television rights, and Washington will adapt the book for the series himself. 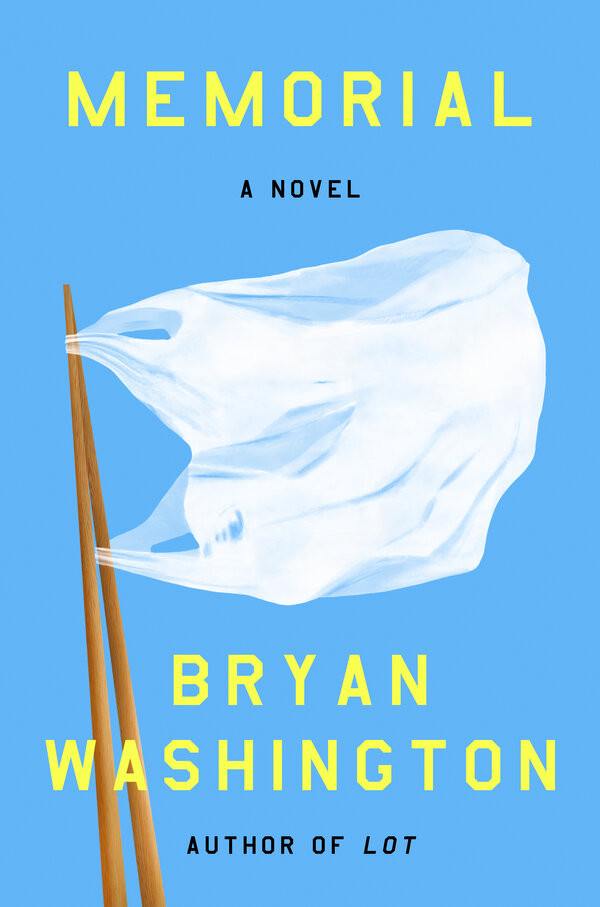 “Memorial” began as a six-page short story. At the time, Washington was working on another project, but he couldn’t shake Benson and Mike.

“I found myself returning to that first story consistently, partly because it was just easier, and I’m inclined to do things that are easier than not because writing is difficult a majority of the time in any capacity,” he said. After expanding the story a little more, he showed it to agents and friends, who encouraged him to keep going. He worked on it on and off for three years, then made a focused effort for about five months.

“Memorial” is Washington’s second book, arriving just over a year after his story collection, “Lot.” Set in Houston and revolving around young Black and Latino men, often grappling with their sexuality, it was an acclaimed debut.

“Bryan immediately came across as a fresh, electric, fun yet powerful new voice, writing about a place — Houston — that wasn’t really depicted that way in fiction before,” Laura Perciasepe, his editor at Riverhead, said.

“Lot” earned him a spot on the National Book Foundation’s 5 Under 35 list and was among former President Barack Obama’s favorite books of 2019. If Obama’s admiration affected Washington, he doesn’t let on. “Anytime that someone is interested in the thing that you’re doing, I think it’s a little bit strange,” he said. “So I don’t know that the hyper-magnification of that makes it any stranger. It’s just strange to begin with.”

Washington hadn’t really tried writing until he was 21, as an undergraduate at the University of Houston. He found inspiration and encouragement from a creative nonfiction class with the novelist Mat Johnson.

“The feeling of being seen for what you’re trying to do narratively, it’s not one that’s a given at all,” Washington said. “The fact that he took the time and was kind was the impetus for me saying, ‘OK, maybe I’ll keep doing it and see how far I can go.’”

So Washington continued taking writing classes. After he graduated in 2015, he went to the University of New Orleans to get an MFA in creative writing, and sold “Lot” the year he graduated. A few months before “Lot” was published, he sold “Memorial.”

“I was so moved to see this boy come out and just start whupping ass from the jump,” Johnson said. “It was just beautiful.”

Much of the conversation about “Lot” focused on how Washington, who was born in Kentucky and moved to Houston when he was a child, offered a view of gentrification, economic inequality and racism in the city. Now, with “Memorial,” Washington introduces a new city to his oeuvre: Osaka.

He first traveled there in 2015 to visit a friend and has returned several times, he said, “hanging out with friends and going out to eat, going to sento and the bathhouses and visiting shrines and just, you know, laying around. And he spent virtually all of last summer there while working on edits to “Memorial.”

The time he spent in the city made an impression. “It’s really rare to find any space where you feel comfortable, where you’re privy to the generosity of the folks that are living there,” he said. “And when folks take you in, I think that’s a pretty special thing.”

Part of his mission with the novel was to document Osaka and, once again, Houston. “The intent is for the novel to be as much about the cities as it is about the characters,” he said, “a very particular, very specific picture of these places while keeping the dignity of the cities intact.”

The other star of the book is food: focused, detailed, hunger-inducing descriptions of meals and cooking.

For example, when Mitsuko cooks a meal for Benson, “She proceeds to break down the carcass, bone by bone, stuffing the remains in a pot on the stove for stock. When she’s finished clipping the fat, Mitsuko shakes each limb with a flick of her wrist. Her seasonings are lined up. She douses the meat in what looks like a pool of salt,” Washington writes. “Eventually she pirouettes to the side, flinging the chicken into a pan. It sizzles like a sheet of rain.”

The lush writing about food serves a few purposes in the book, Washington says. “In some ways the food is just food,” he said. But he was also curious to see “how food could act as a vehicle for emotion and for pleasure when it wasn’t immediately apparent that that transaction was taking place on the page.”

He does not have any formal culinary training. He started cooking in junior high school because “both my parents worked and I needed to cook if I wanted to eat something.” Washington watched his neighbors cook and began emulating them.

In 2017, he began writing about food — achiote and yaka mein for The Awl, broth for Hazlitt. It wasn’t a subject he planned on specializing in, but his attraction to it makes some sense. “The first books that I actually took to and really read were cookbooks,” he said. “And I was always peripherally reading food writing, whether it was John Birdsall or it was Tejal Rao or whether it was any number of cookbooks and just sort of peeking through those pages and just seeing how folks do what they do.”

Implicit in a book about changing relationships and titled “Memorial” is the question of what is being preserved. The book preserves Houston and Osaka. It preserves the feeling of being young and lost. It preserves the food that gives us comfort and nourishment and purpose. But there is one thing Washington doesn’t want to preserve: the limited path for writers like him. He wants to evolve it.

With “Memorial,” he said, “Ideally, it’ll kick the stone a little further down the line for books that don’t hit quite down the middle of obvious marketability. And the next person will be able to work on their weird thing, and so will the folks after them.”