THE LITTLE MERMAID
By Jerry Pinkney

Like most American children, I grew up reading fairy tales. As a person of color, I accepted that the characters in the stories often didn’t look like me or reflect my experience. That’s just how they were. Yet one of the enduring features of fairy tales is how easily they can be adapted to the times and perspectives of their readership. Two new books — “The Magic Fish,” by Trung Le Nguyen, and “The Little Mermaid,” by Jerry Pinkney — open up the possibilities by recasting fairy tales, including a Hans Christian Andersen classic, for a more diverse generation. In doing so, they ruminate on the ways imaginary tales help children of all experiences shape their own personal narratives and how stories give us hope. 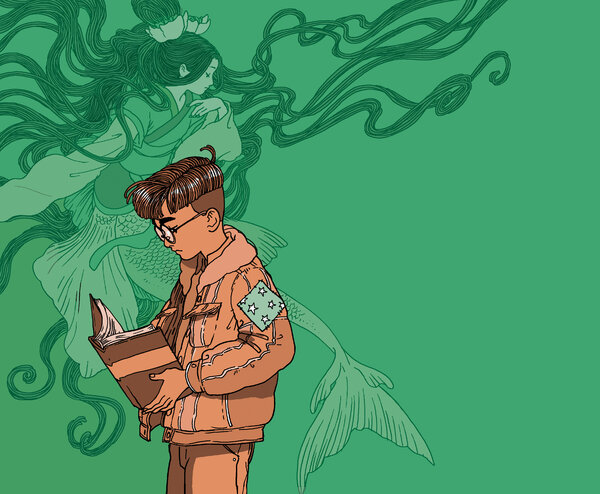 “The Magic Fish” is the comic book artist Nguyen’s debut graphic novel. It presents variations of two well-known fairy tales through the eyes of a contemporary Vietnamese-American teenager named Tien. Tien is gay and struggling to find the words to come out to his immigrant parents. Literally. He speaks mostly English and they speak mostly Vietnamese. Tien even asks a local librarian for help on how to come out in Vietnamese.

What Tien and his family share is a love of fairy tales. In their downtime, Tien and his mother, Hien, read library books to each other. It’s their way of bonding and it helps Hien practice her English.

The first two stories are “relatives of the Cinderella fairy tale,” according to an author’s note. In one, based on the German “Allerleirauh,” a girl trapped in a family curse falls in love with a prince. In the other, based on the Vietnamese “Tam Cam,” an evil stepmother attempts to vanquish a girl who receives help from a magical fish. The third story is a retelling of “The Little Mermaid,” with an unexpected twist at the end. Each tale allows Tien and Hien to reflect on their own lives and connect to each other. Hien is anguished by the ocean that separates her from her family in Vietnam. Tien is anguished by the stigma of being queer and falling in love. When language fails, stories help them speak.

Nguyen is a gifted storyteller and the graphic novel format plays to his strengths. Fairy tale tropes are applied with deliberate pacing and lushly drawn details that add emphasis to scenes of romance or melancholy. Traditional Vietnamese imagery, full of references to shoujo manga and classic storybooks, replaces Eurocentric aesthetics. These visuals, combined with the thoughtfulness and compassion with which Nguyen handles Tien’s emotional journey, make “The Magic Fish” especially inventive.

With “The Little Mermaid,” the award-winning author and illustrator Jerry Pinkney adapts the Hans Christian Andersen classic as a picture book for a new generation. Fans of the original story, and of the Disney movie, will find the setup familiar. But instead of pining over the love of a handsome prince, Pinkney’s mermaid, named Melody, befriends a human girl of a similar age, Zion.

The girls immediately feel a kinship and the strength of their connection allows them to find ways to communicate. After learning Melody’s story, Zion encourages the mermaid to reclaim her voice, both literally and figuratively, to save the human and ocean worlds from the Sea Witch’s destruction.

Pinkney creates a vivid watercolor world in which all the characters, human and mermaid alike, are Black. This visual dynamic is particularly effective in illustrating the affinity between Melody and Zion, two fundamentally different beings. He brings both land and underwater worlds to life with the realism of his drawings and the warmth of his palette. Melody’s human treasures are lovingly rendered with rich detail, and the depictions of the magical sea creatures, including the Sea Witch, are haunting.

Those who found the heroine in Andersen’s version too passive will also appreciate this version’s theme of empowerment. Melody is celebrated rather than punished for her curiosity. She learns to embrace the power of her voice rather than sacrifice her autonomy.

Jen Wang is the author of the graphic novels “The Prince and the Dressmaker” and “Stargazing.”