The odd couple: One went to bed on cognac, the other on cocoa – but over the years wartime allies and peacetime enemies Attlee and Churchill forged a unique bond

ATTLEE AND CHURCHILL: ALLIES IN WAR, ADVERSARIES IN PEACE

Does politics have to be the unedifying, vicious, name-calling spectacle we are embroiled in now, a bear pit of hostility and hate?

For an answer, let us go back to the summer of 1945 and one of the crossroads in our history. The war in Europe is over and Britain has just gone to the polls in a general election, the result of which is delayed for more than a fortnight for the votes of the servicemen still overseas to be collected and counted. 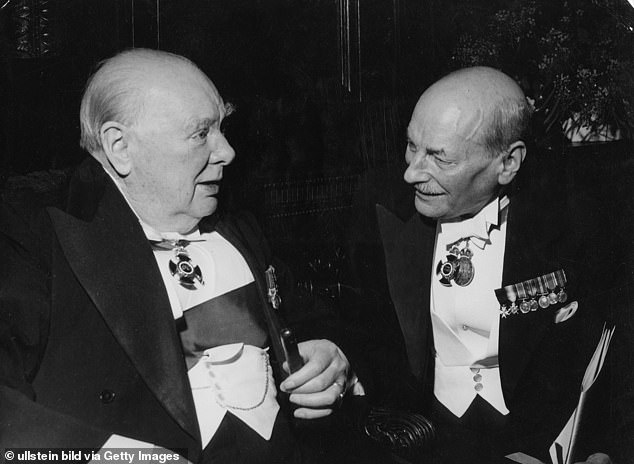 The partnership and rivalry between Winston Churchill and Clement Attlee, pictured together here, is explored in a fascinating book by Leo McKinstry 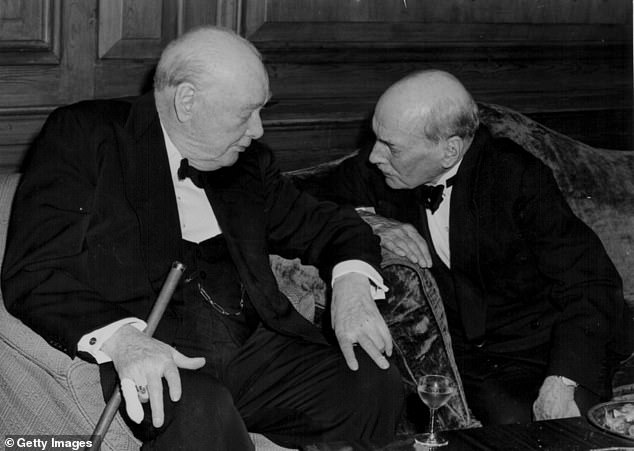 Churchill lead the United Kingdom through the Second World War while Attlee laid the foundations of the NHS and welfare state. Pictured together at a dinner in honour of the Australian prime minister in 1959, at the Dorchester hotel, London

Though Churchill is confident he’s won the election and will remain as Britain’s leader, he invites his deadly rival, Labour leader Clement Attlee, to accompany him. It is the courteous and sensible thing to do, just in case.

Even more courteously, Churchill makes an astonishing offer to the socialist Attlee: would he like the services of one of his valets ‘to look after [his] luggage and deal with [his] personal requirements’ on the trip to Germany. Even more astonishingly, Attlee suppresses the class warrior in him and gratefully accepts.

Today, as the Brexit debacle descends ever deeper into a personalised, polarised slanging match, the thought of that happening now — of Boris lending his manservant to Jeremy Corbyn and, even more, of the prickly Jezza agreeing — had me hooting with laughter.

Mutual respect has disappeared from the political landscape, replaced by animosity and distrust.

But it need not be so, as Leo McKinstry’s superb account of one of the great political rivalries — and double acts — of the 20th century shows. 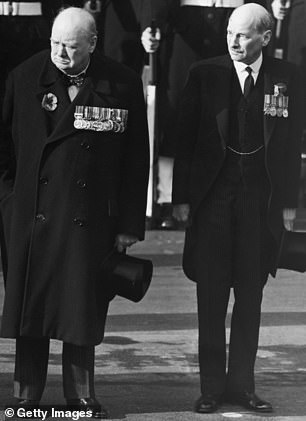 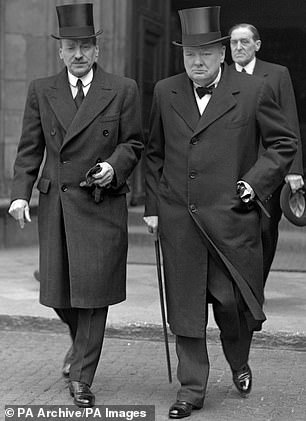 The pair were also friendly towards one another. Churchill invited Attlee to a world leaders summit in Potsdam in 1945, shortly before the Labour leader beat him in a general election, and even offered him a valet to look after his luggage and ‘personal requirements’

It reads like a timely parable about the necessity for cooperation, concession and compromise in politics. Otherwise chaos reigns.

Allies in wartime and adversaries in peace, Attlee and Churchill shaped the country we live in, and left legacies that endure to this day.

Yet it is hard to imagine two characters more different. Boisterous, larger-than-life Churchill was flamboyant and in everyone’s face; Attlee was quiet and undemonstrative to the point of anonymity and awkwardness — ‘a funny little mouse’, as Churchill’s wife, Clemmie, called him.

Little things are telling. One had a horde of secretaries on permanent call to write down his every word of wisdom, often from his bed; the other bashed out speeches with three fingers on a battered typewriter.

One rounded off the day with champagne and brandy, the other shared a cup of bedtime cocoa with his wife, Vi. (She also drove him everywhere, even on election campaigns across the nation, in the family Hillman.) One holidayed in Monte Carlo, the other in Frinton.

Churchill was extravagant to the point of near-bankruptcy (he had to be bailed out by less-than-savoury friends) while Attlee was so austere that he was once seen up on the roof of his house in suburban Stanmore cleaning his own gutters.

Even when he was prime minister and weekending at Chequers, visitors were known to keep their coats on during dinner because he wouldn’t turn up the heating. 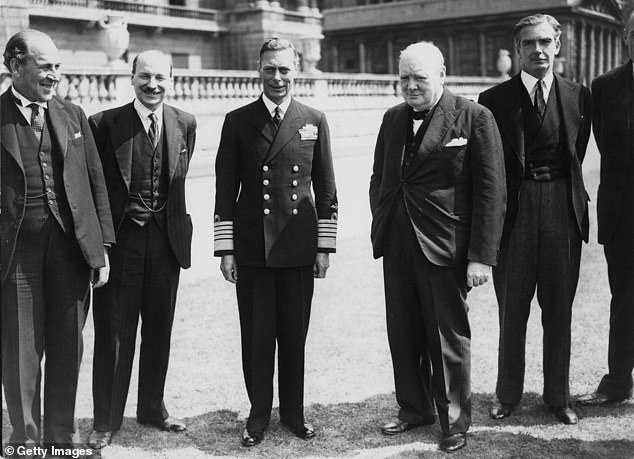 But there was a bond between the men that was unique among political rivals holding such different views of the world. One was a crusader for free enterprise and laissez-faire, the other a champion of state control.

It was World War II, of course, that brought them together.

Churchill became prime minister in the emergency of 1940, heading a cross-party coalition government. Attlee was part of it as Labour leader — a position he had slipped into almost by accident; he was seen as a stop-gap middle-of-the-roader who would keep the radicals of the far-Left in check. 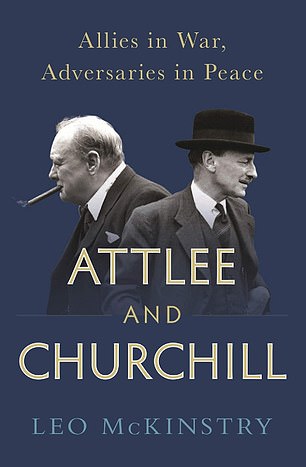 Churchill directed his blood, sweat and tears to inspiring and leading the fight against Hitler. Attlee got on with the job of running the country, and proved very good at it.

Quietly, Attlee laid the groundwork, for a national health service and a welfare state. His thoughts turned to planning the sort of country Britain should be after the war. And when Hitler was defeated and the coalition government disbanded, it was Attlee’s vision of the future that hit the right note with a war-weary nation.

At that summit in Potsdam it was a sign of the new times that, during a victory parade of British soldiers, Attlee got a bigger cheer than Churchill.

The election result, when it finally came, was a landslide for Labour, and Attlee moved into No. 10 as prime minister (though not before fending off his rampant Left-wingers who, in typical factional Labour style, attempted even at that late stage to replace him with one of their own).

A tearful Churchill was staggered by being ousted from power but took defeat on the chin, magnanimously congratulating his rival on his victory and wishing him well. He didn’t carp, cry foul or call for a re-run. ‘We have no right to feel hurt,’ he pronounced. ‘This is democracy. This is what we have been fighting for.’ It’s a lesson that some still need to learn in 2019.

For the next six years, Attlee pushed on with the social restructuring of Britain and the nationalisation of industries that would make him the icon of the Left he has become. 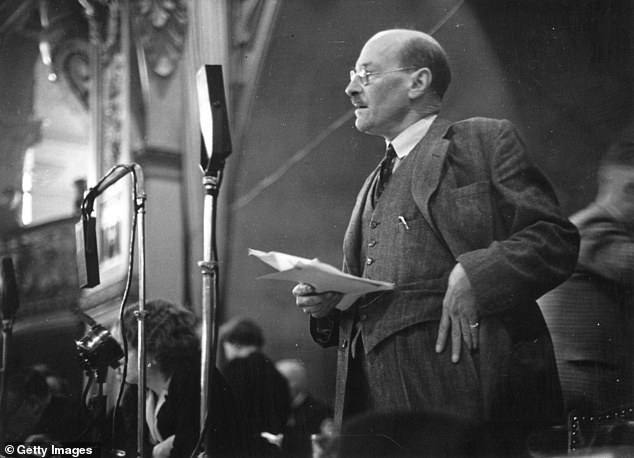 Attlee, shown here making a statement at Labour party conference in Blackpool, 19454, was famously so careful with money that he was even seen on his roof cleaning the gutters himself

(That he also gave the go-ahead for nuclear weapons, supported the foundation of the state of Israel and opposed the idea of a European Union — all deeply contentious issues for Labour supporters today — is often forgotten.)

From the Opposition benches, Churchill gave his former deputy no quarter — dismissing Attlee with a stinging rebuke as ‘a modest man, with much to be modest about’.

They jousted constantly, though Churchill, with his quicksilver tongue, usually had the last word against the leaden Attlee.

One day, in a House of Commons cloakroom, the men are said to have taken up positions at urinals far apart. ‘Feeling standoffish are we, Winston?’ Attlee commented from his corner. Back roared Churchill: ‘That’s right, Clement. Whenever you see something that is big, private and works well, you want to nationalise it!’

But, though there was rivalry and even occasional rancour, there was still huge mutual respect. The two men exchanged birthday greetings every year and frequently dined together. ‘I have no feelings of unfriendliness to Attlee,’ Churchill confided to his wife in a letter.

As for which of them came out on top in the end, what is perhaps most significant is that — as McKinstry points out — when the Tories returned to power in 1951, Churchill did not try to scuttle everything the Attlee government had done.

Yes, he continued to rage against socialism and promised to ‘set the people free’ from state intervention, but in reality he accepted that there was no turning back the clock, as did the nation. A welfare system, in some shape or other, was here for good.

The upshot of this most peculiar political partnership/rivalry was that, though lion-hearted Churchill won the war, it was the ‘mouse’ Attlee who won the peace.