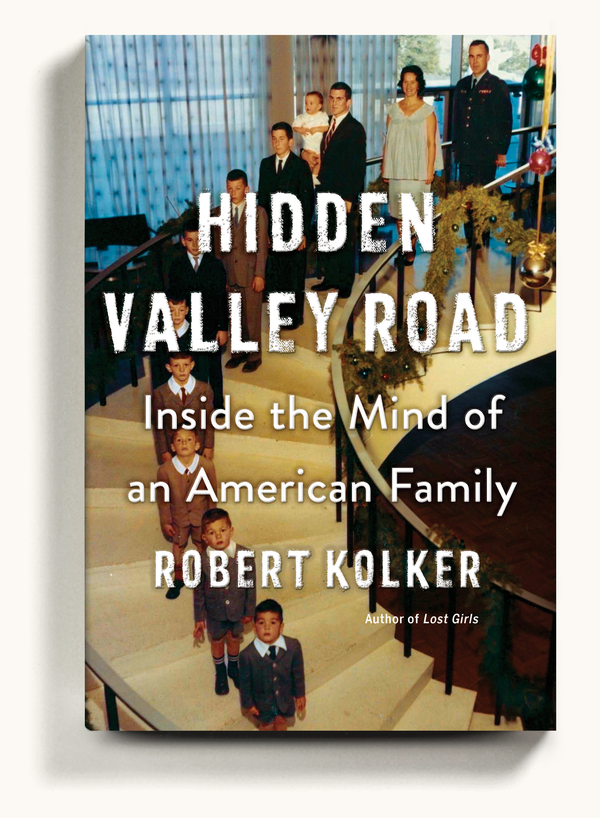 Donald Galvin was a sophomore at Colorado State when he first checked into the campus health clinic to get treated for a cat bite, offering no further explanation of what had occurred. Two years and several visits later, he arrived at the clinic with another cat bite — only this time he told a doctor what happened to the cat.

“He killed a cat slowly and painfully,” the doctor recorded in his notes. “Doesn’t know why he killed the cat nor why he tormented. Got emotionally upset as he discussed the behavior.”

The oldest of 12 siblings, Donald was the first to be told he was schizophrenic. Five of his brothers would eventually get the same diagnosis. Even the healthy children in the Galvin family were beset in a sense, forced to live with an affliction that inevitably shaped their relationships to their parents and to one another. As the journalist Robert Kolker writes in “Hidden Valley Road,” having just one schizophrenic family member is bound to reorient the experiences of everyone else; having six made the Galvins extraordinary, not least to the medical researchers who eventually studied them.

Kolker’s previous book, “Lost Girls,” traced the lives of five murdered women in Long Island and told a story of sex work and law enforcement during a time of technological change. His new book is a comparable feat of empathy and narrative journalism, as he coaxes out the struggles of the Galvin family, showing how they embodied the roiling debates over the science of schizophrenia — not just its causes, “but what it actually is.”

The Galvin children were all born between 1945 and 1965, during the two decades of the baby boom. It was a time when the psychoanalytic approach to mental illness, with its theory of the cold and domineering “schizophrenogenic mother,” reigned supreme. What began as a more holistic rejoinder to the crude biological reductionism of the early 20th century soon hardened into its own orthodoxy. According to its proponents, mental illness was a disease of nurture, not nature; as one psychiatrist put it, the schizophrenic patient “is always one who is reared by a woman who suffers from a perversion of the maternal instinct.”

Mimi, the mother of the Galvin children, felt like doctors were always judging her, and she tended to react by doubling down on her own coping mechanisms. Kolker’s depiction of her is humane yet unsparing. He describes her fastidious perfectionism and what sometimes looked like willful denial. She would never admit it to anyone, but Kolker — who interviewed her before her death in 2017 — suggests that Mimi was understandably overwhelmed, a feeling she managed with a twice-a-week, two-shopping-cart grocery haul and adherence to strict routines. Keeping the household running consumed her fortitude and the family’s resources.

Don, the paterfamilias, had a military career and was mostly absent — leaving Mimi to serve as the lightning rod for most of the blame, not only from doctors but from her own children. Mimi was the omnipresent disciplinarian; Don was the gentler authority figure, fleeting and playful, selling his sons on self-help books like “The Power of Positive Thinking” and telling them they could fight one another, but only while wearing boxing gloves.

As Kolker puts it, the combination of order and chaos meant that the Galvin home on Hidden Valley Road was “a place where two different realities existed at the same time: the wrestling pit and the church choir.” The boys bullied one another, and their jostling would sometimes escalate to brawls that drew blood. The two girls, the youngest children in the family, were so eager to leave the house that they would spend weekends with Jim, one of their adult brothers, who sexually abused them and beat his wife.

The Galvins’ breakdowns, when they came, resulted in frequent institutionalizations and, in one startling and horrific case, a murder-suicide. The six brothers with schizophrenia were prescribed so many antipsychotic drugs that those who survived into middle age had to labor under the drugs’ potentially life-threatening side effects; two of the brothers succumbed to them, dying of heart failure.

Kolker recounts the Galvins’ home life with such vivid specificity that it can seem as if he’s working up to a suggestion that their upbringing determined the course of their mental health. But family turmoil is inherently more amenable to narrative drama than the slow, painstaking crawl of medical research, and Kolker — who skillfully corrals the disparate strands of his story and gives all of his many characters their due — knows better than to settle for pat truths. He also includes the stories of scientists who devoted their lives to studying the biology of schizophrenia, looking for physical measures and genetic markers of the disease.

“Hidden Valley Road” arrives at what’s known as the “vulnerability hypothesis” — the notion that genetic traits could make the brain especially vulnerable to environmental triggers. It’s an approach that straddles the nature-nurture divide by viewing schizophrenia as an information-processing disorder — a hypersensitivity that can, depending on the circumstances, tip into a psychotic break.

When Mimi was told that Donald was schizophrenic, she was given no commensurate sense of understanding, no indication that her son’s illness might have anything to do with forces beyond the home she kept on Hidden Valley Road. “You have nobody to talk to,” she told Kolker. “We were an exemplary family. Everybody used us as a model. And when it first happened we were mortally ashamed.”