THE MAN WHO RAN WASHINGTON
The Life and Times of James A. Baker III
By Peter Baker and Susan Glasser

Seven years ago, when the husband-and-wife reporting team of Peter Baker and Susan Glasser began working on their enthralling, comprehensive biography of James A. Baker III, Donald Trump was a cartoonish reality television star and huckster whose worldview — to the extent he defined it — seemed laughably disconnected from where the United States and global trends were headed.

The core tension that Baker (no relation to his subject) and Glasser must overcome in “The Man Who Ran Washington” is making James Baker — the Washington insider, Republican stalwart and statesman who played an indisputably central role in shaping major events for a half-century — seem relevant today. Indeed, they themselves argue that the world Baker helped mold through cunning, meticulous organization and tactical prowess has faded into history. From Trump’s xenophobia and skepticism about American international leadership to the Republican Party’s takeover by someone Baker deems “crazy,” a reader can have the impression that the authors’ accounting of Baker’s achievements is tinted in sepia.

Yet the life story of the man Barack Obama’s national security adviser Thomas E. Donilon calls “the most important unelected official since World War II” is relevant and timely for two reasons. The first is that it provides deep insight into Baker’s strengths at diplomacy — skills that will become even more important as America’s influence ebbs in the coming years. The former secretary of state’s experiences as a public servant offer timeless lessons in how to use personal relationships, broad-based coalitions and tireless negotiating to advance United States interests.

The second reason this book matters now is that even though Baker sees himself as temperamentally and philosophically opposite to Donald Trump, his silence in the face of Trump’s outrages reflects the broader complicity of the so-called “Republicans who know better.” Although Baker agonized longer than many ambivalent Trump voters, he — unlike his closest friend, former President George H. W. Bush (who voted for Hillary Clinton) — rationalized that Republican Party loyalty, judicial appointments, tax cuts, deregulation and maintaining his own White House “access” would make it worthwhile to keep his concerns to himself. “Becoming a Never Trumper would have meant giving up whatever modest influence he had left,” the authors write. “Whether he actually needed it anymore was not the point.”

Unfortunately, the costs of Trump’s presidency to both Baker’s legacy and his stated principles have been far steeper than the benefits: the near-unraveling of an international system that Baker dedicated much of his life to strengthening, the gutting of American standing and credibility around the world, the mainstreaming of contempt for science and facts and the vulgarization and degradation of American institutions. This makes his devil’s bargain the rare Baker deal in which the master negotiator comes out the loser.

Baker cooperated wholeheartedly with Peter Baker, the chief White House correspondent for The Times, and Susan Glasser, a staff writer for The New Yorker, participating in 70 hours of interviews and granting them unlimited access to his papers. Nonetheless, on one level, Baker presented a challenging subject for his biographers, as the story of his rise in politics could be reduced to that of a man of privilege using his connections to obtain more of it. James Baker was the latest in a long line of James Bakers. Starting in the 19th century, his clan helped build the city of Houston. Indeed, Baker’s family was so well off that his doting mother would send the family chauffeur to meet Baker at school every day with a piping hot, home-cooked meal.

The authors also faced the challenge of peering behind Baker’s public persona, as he is famously buttoned-up. When his first wife developed what would prove a fatal cancer, Baker hid the gravity of her illness from their sons — and even attempted to keep the prognosis from his beloved spouse herself. When a disruptive staffer personally close to George H. W. Bush undermined Baker’s efforts to run Bush’s first presidential campaign in 1980, Baker was so reluctant to discuss the issue with his friend that he asked his second wife to inform Bush that he would resign if the situation wasn’t resolved. 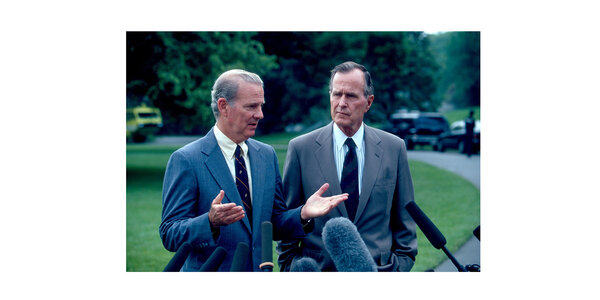 Given Baker’s legendary reserve, one of the most touching parts of the book is its examination of the deep, humorous and also rivalrous friendship he maintained with Bush. The relationship, which began on the Houston tennis courts, ended up defining both of their lives. (Bronze statues of the late president and Baker, now 90, have already been unveiled in a Houston park, facing each other.)

Without Bush, it is not clear that Baker, already in his 40s, would have ever left the safe confines of his corporate law firm in Houston. Bush persuaded his friend “Jimmy” to become a Republican, to fund-raise for him and ultimately to throw his hat into the ring in the 1970s for jobs in Washington. Bush’s lobbying helped secure for Baker the No. 2 position at the Commerce Department under President Gerald Ford. Because Baker had an uncommon knack and taste for making things happen, the Texas lawyer would go on to run two White Houses (he is the only person to serve as chief of staff to two different presidents, the first Bush and Ronald Reagan), two cabinet departments (Treasury and State) and five presidential campaigns.

In 1976, less than a year after Baker took up his first job in the executive branch, President Ford tapped him to help fend off Ronald Reagan’s primary challenge for the Republican presidential nomination. Though Ford would lose in the general election, Baker made an impression and, when Republicans returned to power four years later with Ronald Reagan, he would serve his first stint as chief of staff (wielding such power that some called him “co-president”). Then, as secretary of the Treasury (with no more than an undergraduate economics class under his belt), he rewrote the tax code and negotiated the groundbreaking United States-Canada Free Trade Agreement, a template for future trade agreements. After running George H. W. Bush’s successful presidential campaign in 1988, Baker was awarded with the position he would love most: secretary of state.

He proved the right man for a watershed moment in world affairs, as he deftly managed the American response to the fall of the Berlin Wall, the collapse of the Soviet Union and Saddam Hussein’s invasion of Kuwait. On each, the authors do a splendid job reminding readers of the sheer number and weight of decisions that had to be made amid great uncertainty — showing that, however inevitable the reunification of Germany, the peaceful disintegration of the Soviet Union and the broad international support for the United States-led Persian Gulf war may seem today, nothing was assured at the time. Secretary Baker played a vital role in helping smooth the turbulent passage out of the Cold War.

When tapped in retirement to help his best friend’s son George W. Bush navigate the Florida recount crisis in the contested 2000 election, his reputation was so formidable that, according to Baker and Glasser, Al Gore’s Democratic supporters “knew they would lose the moment they heard of his selection.” Sure enough, Baker assembled a top-flight ad hoc law firm — a kind of legal “pickup team” — on the fly, including Ted Cruz, Brett Kavanaugh and John Roberts, and got his man across the finish line.

Baker was immensely effective at whatever he put his mind to. But even as his reputation as a winner and fixer grew, he chafed at always playing second fiddle to his closest friend — and seethed while secretary of state at having to wait to leave Andrews Air Force Base until President Bush had departed on Marine One. As the authors write, “There was a part of Baker that could not help thinking he could do it better himself.”

Bush, meanwhile, bristled at the impression (cultivated in part by Baker’s selective leaks to journalists) that his friend was the “indispensable man” behind the throne. Bill Clinton’s campaign adviser George Stephanopoulos played up this notion in the 1992 presidential race, telling the press, “The big question is: Will James Baker offer George Bush a substantial policy role in his administration?” During the Reagan years, Vice President Bush would rib Baker: “If you’re so smart, how come you’re not vice president?” Once he won election in 1988, his dig got a promotion: “If you’re so smart, how come you’re not president?”

The authors rightly highlight the dimensions of Baker’s illustrious career that show so much about what is broken in the current American political system. His reliance, as a “political knife fighter,” on the race-baiting Willie Horton advertisement to push George H. W. Bush over the top in the 1988 election (a move that the Trump campaign seems to have studied). His parlaying of the contacts he made as a public servant into a lucrative post-government windfall. His almost complete lack of interest in the horrors of Tiananmen Square and the genocide in Bosnia. And the various times — like the run-up to President George W. Bush’s disastrous invasion of Iraq, and throughout the Trump presidency — when Baker refused to speak up because he was afraid of being frozen out of the corridors of power.

Nonetheless, now especially, when incompetence and ideology have cost the lives of some 200,000 Americans in the Covid pandemic and when faith in American leadership in the world has plummeted, it is hard to dismiss the authors’ nostalgia for what Baker was able to achieve by moving the machinery of American politics: “He was no visionary, no innovator. He articulated no grand plan for the country or the world,” Baker and Glasser write. “There was a little idealism involved and a fair degree of opportunism. He was not above political hardball to advance his team’s chances at the ballot box. He never lost sight of what was good for Jim Baker. … But somehow in the main, it worked. Things got done.”