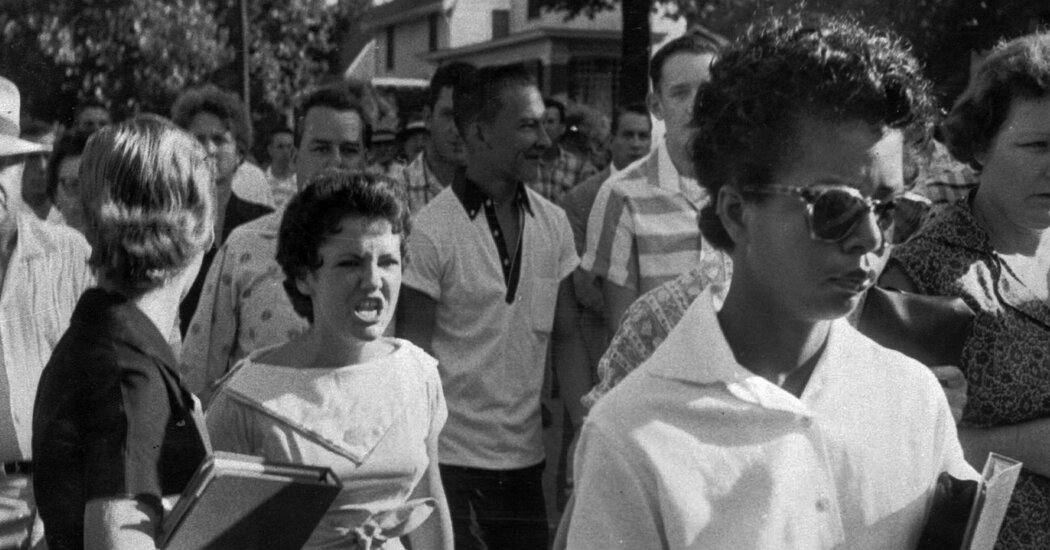 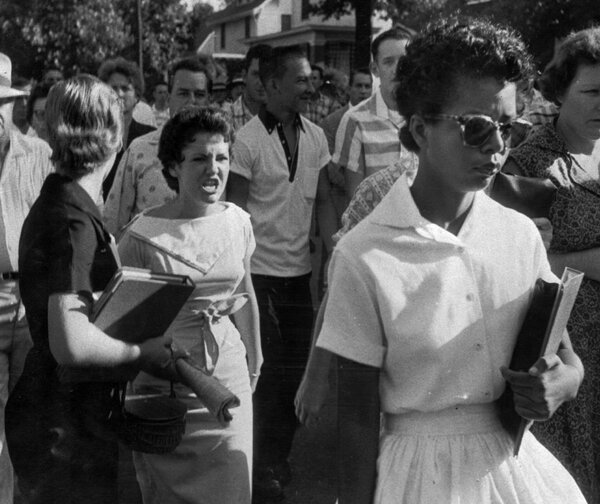 By James A. Morone

THE SHATTERING
America in the 1960s
By Kevin Boyle

Sixteen-year-old Elizabeth Eckford walked alone through the crowd of jeering whites. She hadn’t heard about the escorts assigned to the nine Black youngsters integrating Little Rock’s Central High School because her family had no telephone. So Elizabeth took the city bus, filed past the screeching adults, went up to the guardsmen who blocked her way with raised bayonets, turned around, returned to the bus stop, sat down and tried not to cry as the mob around her kept screaming. It was 1957 and Americans were about to plunge into the 1960s. A seemingly unified nation would confront its original sin, endure all kinds of vertiginous changes and never quite recover.

Kevin Boyle, a professor of history at Northwestern University, tells this story and many others in “The Shattering,” his luminous guide to a tumultuous decade — “a season of hope,” he writes, “and a season of blood.” Boyle grounds his narrative with individuals caught in the whirlwind: Eckford holds her head high and ignores the obscenities. Cpl. James Farley weeps over a dead comrade in an empty supply shed in Da Nang. Sarah Weddington finally gets her first client (women rarely had the opportunity to practice law) and eventually wins her case by persuading the Supreme Court that the Constitution protects abortion rights. And, going back to one of the book’s cover photos, three dozen smiling neighbors pose on July 4, 1961, to celebrate the 38 flags they’ve hoisted over their bungalows on Chicago’s northwest side. It’s a snapshot from the time before: a simple era of patriotism and consensus. But not for everyone.

Not for African Americans pushing against white supremacy. In the South, they demanded simple things — the right to vote, play in the park, get care at the nearest hospital, attend a school whose roof didn’t leak. Boyle emphasizes both the implacable violence they met with and the media images that shocked so many. Birmingham’s snarling police dogs, leaping at young Black students, flashed onto the front pages of newspapers around the world. In the early days of television, NBC interrupted its programming with video of helmeted troopers, some on horseback, slamming their clubs into peaceful protesters in Selma. Those pictures changed the United States.

For starters, as Boyle explains, they transformed both political parties. Democrats had traditionally defended enslavement and then segregation, but in the 1930s and ’40s Northern Black voters clambered into the party — Republicans were taking their votes for granted while Franklin Roosevelt’s New Deal offered help during the Great Depression. Democratic leaders frantically tried to hold together an improbable coalition of Southern segregationists and Northern civil rights activists — till the images streaming out of the South forced a moral reckoning. After Selma, President Lyndon Johnson bet everything on civil rights: “Should we defeat every enemy, and should we double our wealth and conquer the stars, and still be unequal to this issue, then we will have failed as a people and as a nation.” This was, he insisted in a national address, nothing less than a test of America’s soul.

Across the aisle, Republicans — long the party supportive of Black rights — grabbed the Southern votes that the Democrats were leaving behind. Barry Goldwater modeled the new approach during the 1964 presidential election: Stick to high-minded government bashing and avert your eyes while allies inflame white racial resentments. President Nixon, elected in 1968, honed the tactic to a fine art. No Democratic presidential candidate has won the white vote since.