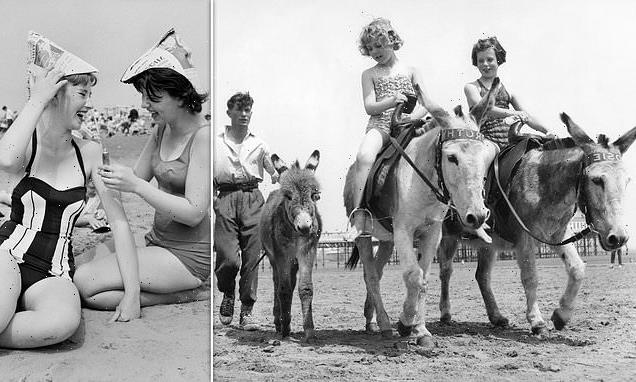 That’s what you call a proper summer holiday – Crumpled AA maps, Thermos flasks in laybys, tuppeny machines in the arcade and the wonder of fish and chips

MY SAND LIFE, MY PEBBLE LIFE: A MEMOIR OF A CHILDHOOD AND THE SEA

Before the pandemic, poet Ian McMillan decided to write a book about the British coast.

He planned to explore villages and towns he’d never seen before. He hoped to take a photographer with him to snap pictures ‘of a windswept me gazing out at the eternal water, perhaps with an ironic ice cream in my hand’.

Then came lockdown, trapping the 66-year-old at home in Barnsley, South Yorkshire, 59.33 miles from the nearest beach at Hornsea. 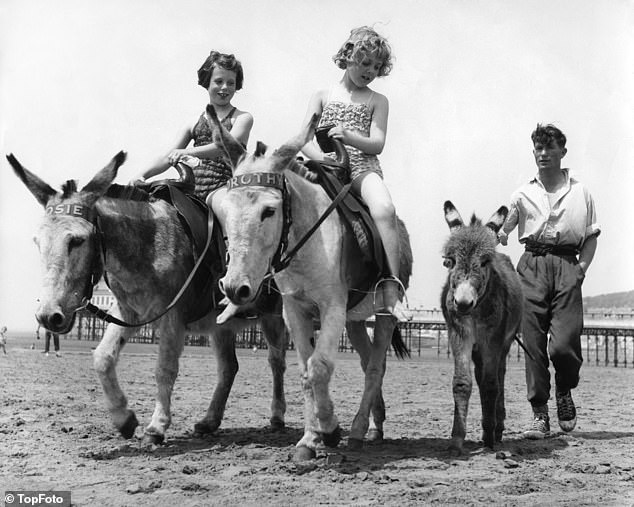 So, in the absence of fresh coast to explore, McMillan began rummaging through his treasure chest of seaside memories. The resulting book combines poignant snatches of personal history with a delightfully nostalgic celebration of the British seaside holiday.

Although he suffers from seasickness, a love of the sea runs in McMillan’s blood. His father served in the Royal Navy from 1937-1958, when they offered him a desk job which he refused on the grounds that ‘you can’t sail a desk’.

He imagines the scene at Plymouth at which his father disembarks, for the final time, from the aircraft carrier HMS Ark Royal: ‘A piece of metal as big as the shout of the gulls in my little ears.’

From there, McMillan gently ushers readers through his boyhood holidays. He takes us to the Isle of Skye and Llandudno, and then back to Northumberland, where a helicopter blows away a family picnic. 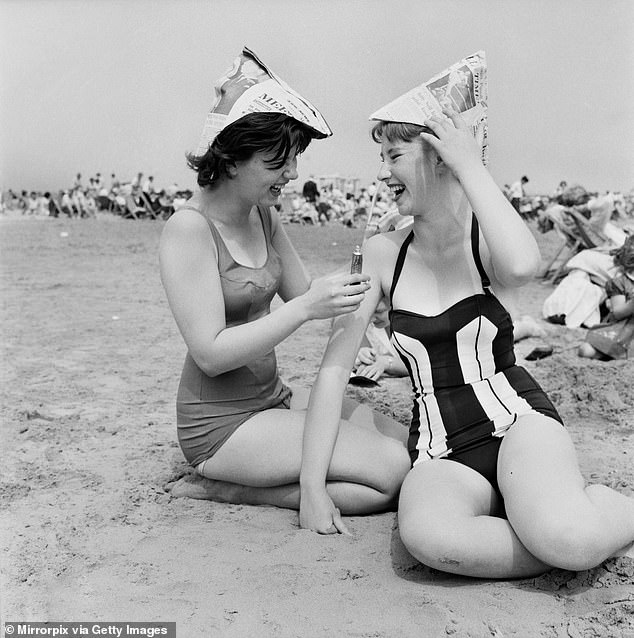 Bank holiday at Blackpool. He tells of his teenage adventures with friends, walking barefoot through Blackpool in the dark to watch the sun rise over the sea

He recalls his father’s careful studying of AA roadmaps in preparation for the long, hot journeys down labyrinthine B roads in his blue Ford Zephyr. He recalls his mother wrapping him in towels as he ran slippery from the waves and his frantic father chasing a libidinous donkey along the shore.

He whisks us back to the caravan parks of the 1960s, reminding us of ‘kitchenettes’ that were more ‘kitchenettettes’ and beds crushed up into the ceiling like cobwebs. He conjures guesthouse breakfasts, served on mismatched floral china by girls in black and white uniforms. Suitcases full of sand.

Looking back on the holidays he’s spent with his own children and grandchildren, McMillan evokes shells, selected and collected, rattling in buckets, held to the ear, and playing the tuppenny machines in the arcades. There are multiple rhapsodies on the wonders of fish and chips. He’s great on the inevitable loss of possessions: glasses buried in the sand, wristwatches left ticking uselessly on clifftop paths.

He celebrates the beach in all weathers, entertaining us with familiar descriptions of those downpour-dashes back to uphill car parks. 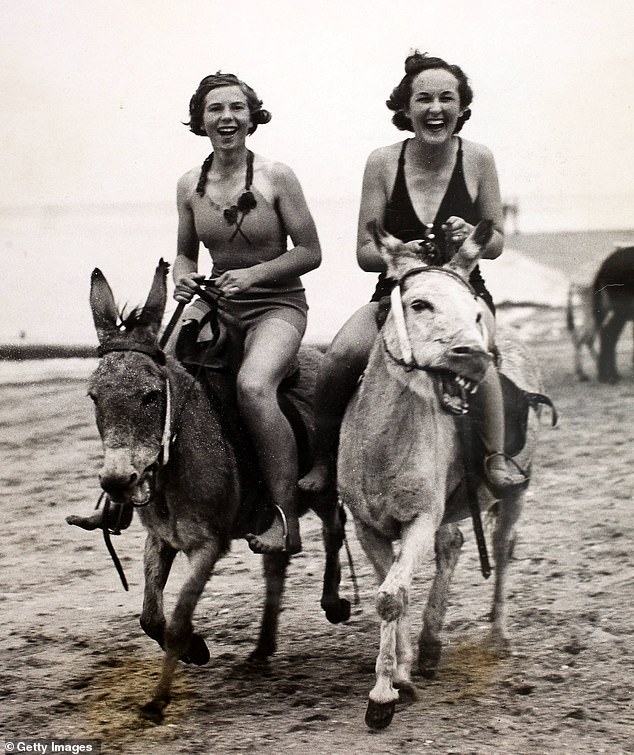 Two young women riding donkeys in Margate. He celebrates the beach in all weathers, entertaining us with familiar descriptions of those downpour-dashes back to uphill car parks

As an occasional presenter of the TV series Coast, he also has good anecdotes about scrambling around inside the Scottish cave inhabited by 15th-century cannibal Sawney Bean, and rowing vintage lifeboats.

His quirky snapshots will ping the sentiment sonar of readers who recall being warmed by Thermos flasks opened in lay-bys and two-bar electric heaters in the back rooms of B&Bs. I loved his descriptions of teenage adventures with friends, walking barefoot through Blackpool in the dark to watch the sun rise over the sea. 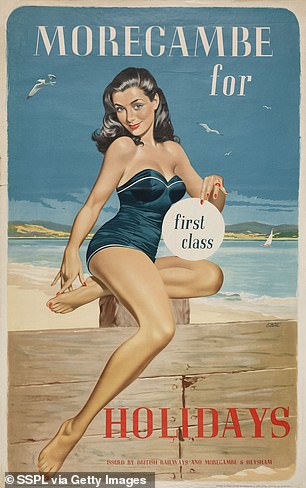 He whisks us back to the caravan parks of the 1960s, reminding us of ‘kitchenettes’ that were more ‘kitchenettettes’ and beds crushed up into the ceiling like cobwebs

‘We felt the balm of sand beneath our mucky adolescent toes. We gazed at the sky. We thought there was something wrong with the sun; it was refusing to rise even though the sky was clear and it was getting quite light.’ They had forgotten that the sun rises in the East and Blackpool is in the West.

In this age of savage argument, it’s a delight to engage in the dawdling minor debates of seaside etiquette. Should you put your swimwear on under your clothes before you leave the B&B, or wriggle into it under a towel by the sea? Should you buy edible or durable souvenirs in the gift shops?

Although he was once described as ‘relentlessly jolly’, McMillan admits that frisbees make him feel grumpy.

He accepts some people embrace them as ‘harmless mid-Atlantic fun’, but he rankles at the ‘performative and showy-off’ nature of the plastic disc wielded by pec-flexing musclemen. He recalls one zooming towards him across the flat sands of North Norfolk, comparing its approach to that of ‘a spaceship containing intelligent multi-cellular and vortexbrained beings, come to explore Hunstanton with a view to setting up coastal fish farms’ before it clocks him on the bonce.

Most movingly, he describes his 92-year-old mother-in-law’s post-lockdown return to her beloved caravan in Cleethorpes.

She has been holidaying in that same spot in Lincolnshire since the 1950s. McMillan jokes that, at Cleethorpes, the tide is always out. ‘Like a reluctant teenager it doesn’t want to come in.’

But returning to the caravan with its familiar ornaments, putting the kettle on and digging out the biscuit box after the pandemic fills his whole family with joy. 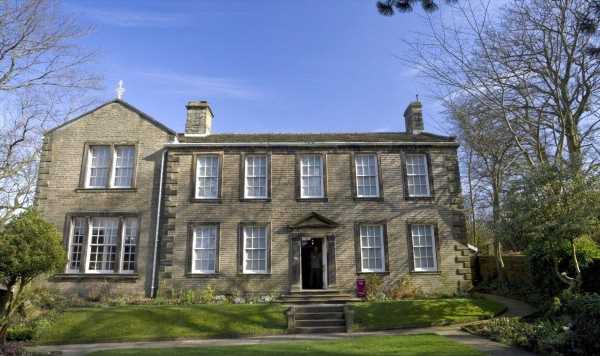