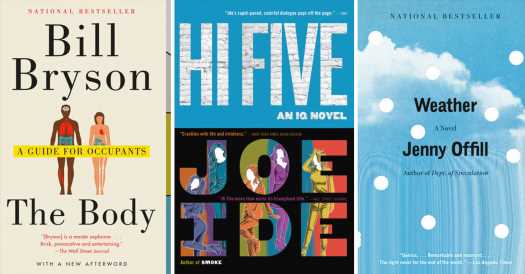 THE BODY: A Guide for Occupants, by Bill Bryson. (Anchor, 464 pp., $17.) Via history, anecdotes, expert interviews and “vocabulary lessons,” the “wry” travel writer takes us on a “body-part-by-body-part tour” to reveal “the thousands of rarely acknowledged tasks our body takes care of as we go about our day.” The result, A. J. Jacobs noted in his review, is “informative” and “entertaining,” despite the occasional “gross” detail; e.g, kissing may transfer up to a billion bacteria from mouth to mouth.

HI FIVE, by Joe Ide. (Mulholland, 368 pp., $16.99.) Ide’s latest Isaiah Quintabe thriller finds him attempting to prove that a “particularly loathsome” arms dealer’s daughter (with at least five different personalities) did not commit a murder, despite her presence at the crime scene. Our reviewer, Sarah Lyall, called it “highly diverting.”

WEATHER, by Jenny Offill. (Vintage, 224 pp., $16.) In this novel about how the daily emotional weather of one woman’s life intersects with her fight against the apocalyptic threat of climate change, Offill takes what could be “pedantic,” our reviewer, Leslie Jamison, observed, and makes it “thrilling and hilarious and terrifying and alive.”

THE MAKING OF A MIRACLE: The Untold Story of the Captain of the 1980 Gold Medal-Winning U.S. Olympic Hockey Team, by Mike Eruzione with Neal E. Boudette. (Harper, 288 pp., $17.99.) Eruzione’s Lake Placid triumph, in the words of our reviewer, John Swansburg, is “a hockey Horatio Alger story.” And “far more interesting” than his account of the win itself are the details “around the edges,” like the fact that he learned the sport on a flooded tennis court wearing his sister’s figure skates.

FOLLOW ME TO GROUND, by Sue Rainsford. (Scribner, 208 pp., $17.) What’s “best” about this allegorical tale of a magical semihuman witch doctor’s obsessive teenage crush, our reviewer, Molly Dektar, wrote, is its “idiosyncratic vision” of first love as “an experience of haunting and being haunted,” where “maturity comes through a process of utter, ruinous self-absorption.”

DARK TOWERS: Deutsche Bank, Donald Trump, and an Epic Trail of Destruction, by David Enrich. (Custom House, 432 pp., $16.99.) Deutsche Bank “bought” Trump’s pitch “as voters would,” Roger Lowenstein pointed out in his review of this “thorough,” “levelheaded” book by a Times editor. Later, “in what could serve as a requiem for the country’s lost innocence,” the bank’s general counsel said, “What the hell are we doing lending money to a guy like this?” 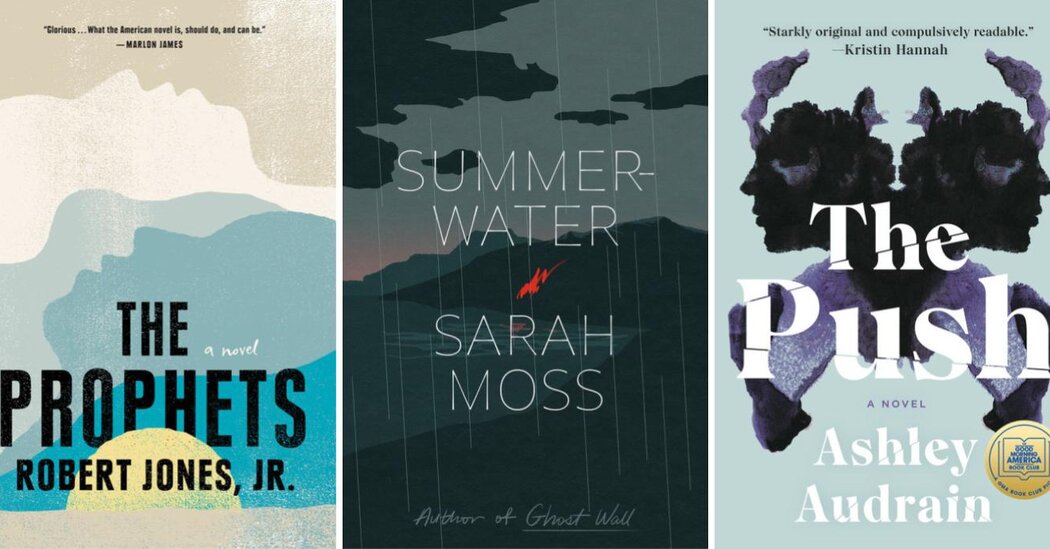