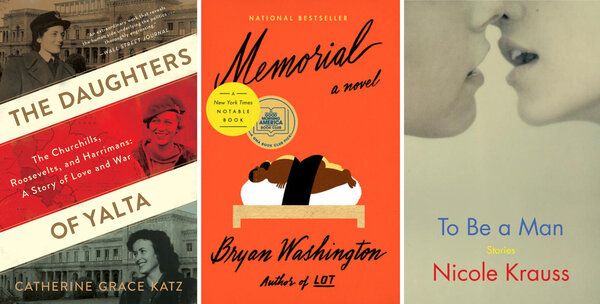 THE DAUGHTERS OF YALTA: The Churchills, Roosevelts, and Harrimans: A Story of Love and War, by Catherine Grace Katz. (Mariner, 432 pp., $18.99.) The “Little Three” (Sarah Churchill, Anna Roosevelt and Kathleen Harriman) who provided behind-the-scenes support at the 1945 summit with Stalin are, “in Katz’s telling … daughters Lear would envy,” Jennet Conant wrote in her review, while wondering what these shrewd women “might have achieved had they been allowed to do more than babysit for their famous fathers.”

MEMORIAL, by Bryan Washington. (Riverhead, 384 pp., $17.) In our reviewer Ryu Spaeth’s words, one of the “great themes” of this novel about the relationship between a Japanese immigrant and his Black boyfriend is the “power to wound” that “parents wield over their children, even well into adulthood.”

TO BE A MAN: Stories, by Nicole Krauss. (Harper Perennial, 240 pp., $17.) Like the author’s acclaimed novels, her first story collection, which our reviewer, Molly Antopol, called “moving” and “superb,” explores “memory and spirituality and transnational Jewishness.” Through narratives “too urgent and alive for neat plotlines, simplistic resolutions or easy answers,” Krauss conjures “an aura of both intimacy and vastness.”

ATTACK SURFACE, by Cory Doctorow. (Tor, 384 pp., $18.99.) In this stand-alone novel set in the world of Doctorow’s “Little Brother” and “Homeland” — which our reviewer, Amal El-Mohtar, described as a place “where technocrats lay siege to civil liberties and young rebels hack circles around them” — a woman is forced to confront the impact of her surveillance work on a friend’s fight for racial justice.

MAD AT THE WORLD: A Life of John Steinbeck, by William Souder. (Norton, 464 pp., $22.95.) A biographer of John James Audubon and Rachel Carson, Souder is particularly interested in Steinbeck’s friendship with the marine biologist and proto-ecologist Ed Ricketts, whose sense of the “underlying pattern” of the world influenced the Nobel Prize–winning novelist and with whom he wrote the nonfiction book “Sea of Cortez.”

SINGULAR SENSATION: The Triumph of Broadway, by Michael Riedel. (Avid Reader, 352 pp., $18.) “At its best,” our reviewer, Helen Shaw, noted, this sequel to the famed theater columnist’s “Razzle Dazzle,” which took us through the 1980s, “feels like a gossipy conversation after a show at a restaurant in the theater district. Reading it, you’ll hear the clink of glassware in the background.”