‘I was Steinbeck’s sex slave’: A long-lost memoir by the Grapes Of Wrath author’s second wife reveals him to be a drunken sadist who wished his second child would ‘hurry up and die’

She was a dazzlingly pretty 20-year-old nightclub singer in Los Angeles. He was a handsome 38-year-old celebrity, the author of The Grapes Of Wrath.

She had large breasts, long legs and beautiful feet. He had ice-cold blue eyes and was a workaholic, as well as a heavy drinker. He was also married. He wooed her ‘like a Don Juan’. She resisted at first, but soon fell head over heels in love.

A few minutes after they had made passionate love for the first time, he went into a brooding, silent mood. 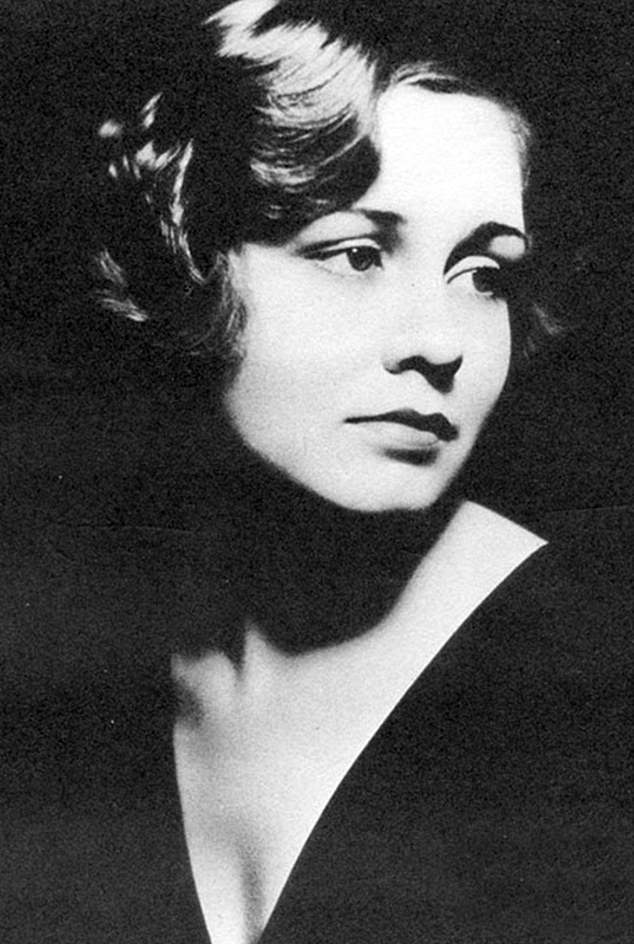 Gwyn Conger, pictured, was John Steinbeck’s second wife. She was a dazzlingly pretty 20-year-old nightclub singer in Los Angeles and he was a handsome 38-year-old celebrity, the author of The Grapes Of Wrath, when they met

And already, reading Gwyn Conger Steinbeck’s gripping memoir about her five-year marriage to John Steinbeck, I was thinking: ‘Uh-oh, I don’t like the way this is going.’

In this 50th anniversary year of the death of John Steinbeck, it’s irresistible to be swept along by this forgotten love affair of the Forties. This is a memoir that reads like a film of that era, complete with Route 66, drunken parties, lavish apartments, cigarettes, railroad journeys, hangovers and sex.

It also nails Steinbeck as the ultimate macho American author of the time, when American authors did tend to be macho, while their British counterparts were effete, cardigan-wearing types.

For more than 40 years, Gwyn’s memoir lay forgotten in a drawer in (of all places) Wales. A journalist called Douglas Brown interviewed Gwyn at length in California in 1972, by which time she was nearly in her 60s and had been divorced from John for 24 years. 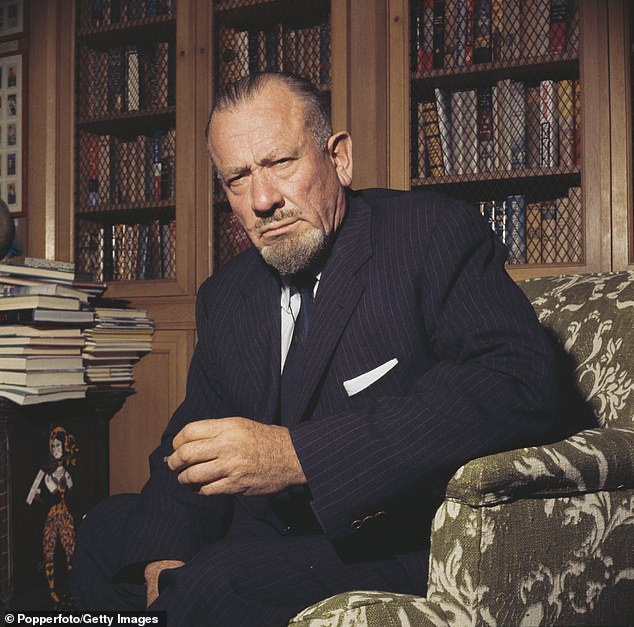 She described the, at times, horrible nature of her marriage to Steinbeck, to whom she bore two children. As soon as the first baby was born, John disappeared for four days on a drunken spree and Gwyn went into post- natal depression

She recounted in vivid detail her marriage to Steinbeck — ‘a tragedy, but a beautiful tragedy’. Brown died without publishing the interview and it ended up in his brother’s house in Montgomery, where it was only recently discovered.

So, at last, we have the missing piece of the Steinbeck jigsaw: the story of his second marriage of three.

Gwyn was the wife who bore Steinbeck his only two children, Thom and Johnny Junior. She also bored him with her two pregnancies.

It’s hard to know where to begin with Steinbeck’s myriad forms of casual callousness to his wife, but his remark to her when their baby was late is perhaps a good place to start: ‘I chose you as the woman to bear my children, and here I am, working on a book, working with my editors, and you have complicated my life.’ As soon as the baby was born, John disappeared for four days on a drunken spree and Gwyn went into post- natal depression. 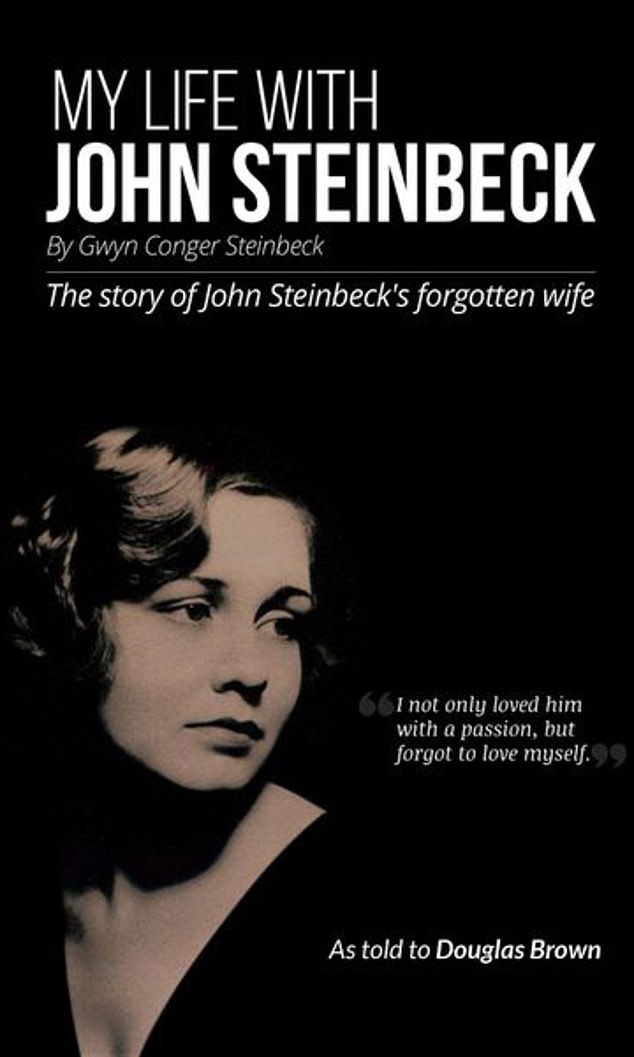 A journalist called Douglas Brown interviewed Gwyn at length in California in 1972, by which time she was nearly in her 60s and had been divorced from John for 24 years. After Douglas’ death, for more than 40 years, Gwyn’s memoir lay forgotten in a drawer in Wales

As a warning against ever marrying someone of whom you are terrified, this memoir could hardly be bettered. Gwyn worshipped John and would put up with anything to keep her man happy — and he knew it. His behaviour was a textbook demonstration of coercive control.

Their love-making was ‘passionate, morning, afternoon or night’ — whenever John wanted it. Without any warning, and often drunk, he would ‘plunge into his conjugal rights’.

And if the sex sounds tiring, that’s nothing compared to the house-moving. No sooner did they settle anywhere than John became restless and decided to move 3,000 miles away. ‘When John made up his mind, that was it, believe me. It was packing time again.’ 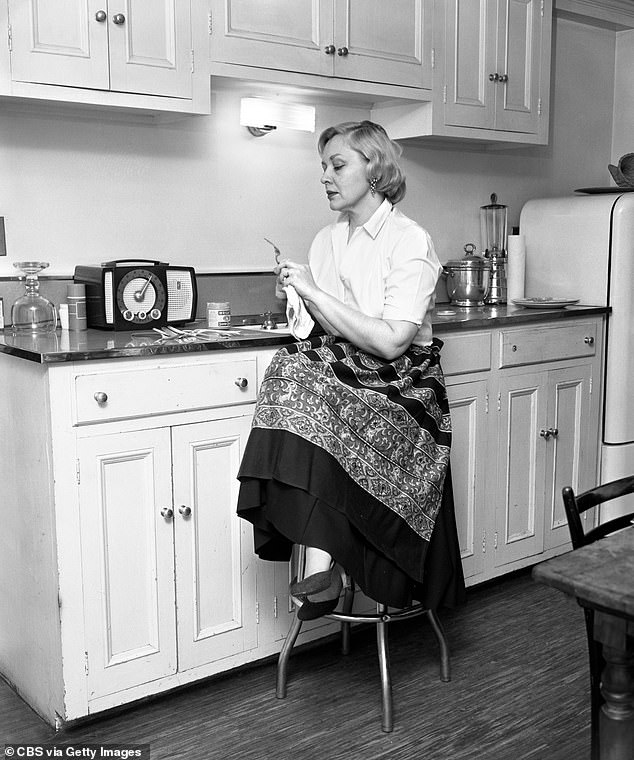 Gwyn Steinbeck pictured sitting in her kitchen and washing dishes while listening to the radio in 1957. When they met, John was married but he wooed her ‘like a Don Juan’. She resisted at first, but soon fell head over heels in love

One memorable house-move turned into the journey from hell. Steinbeck had a sadistic sense of humour — for example, he kept a white rat that he used to let loose in hotel rooms and then go downstairs to wait for the maid’s scream.

And yet he had no ability to laugh at himself. Quite the opposite: at moments when most of us would put up with a bit of light teasing, John went into a deep, silent fury that lasted days.

On this car journey from New York to LA in 1942, in a sweltering car loaded with all their china and records and their sheepdog, Willie, John decided to take a detour to Las Vegas.

Gwyn had a feeling they were driving in the wrong direction and dared to mention it. John took no notice. Sure enough, they ended up in the wrong Las Vegas: the one in New Mexico.

So furious was John about being proven wrong that he didn’t speak for five days and wouldn’t even let the dog out for a pee, as he drove on in silent rage until they reached LA. 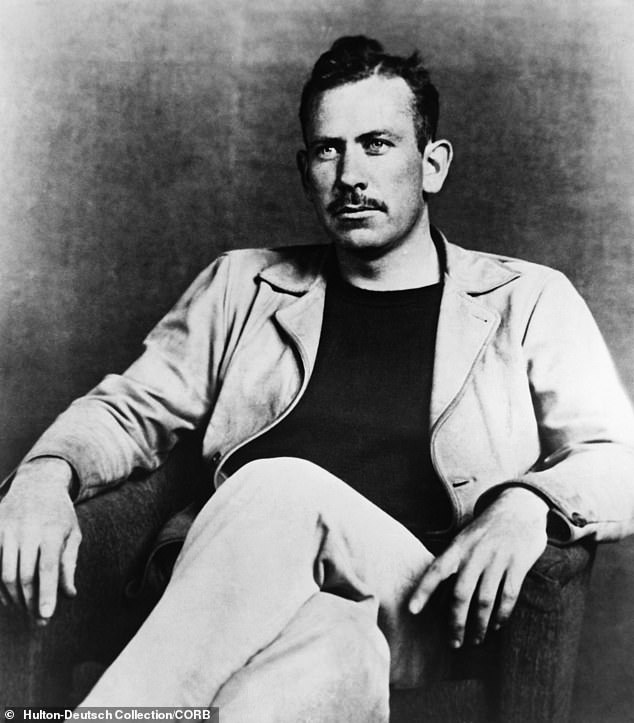 In the memoir, it was abundantly clear that Gwyn worshipped John and would put up with anything to keep her man happy — and he knew it. His behaviour was a textbook demonstration of coercive control

Wherever he lived, he insisted on having his private writing ‘nest’. But there was no question of Gwyn being allowed to settle in her own nest. ‘Everyday sexism’, we call it now — but this was more like everyday misogyny. ‘Of course, I had to mop it up,’ Gwyn casually mentions of the vomit on the floor made by John’s visiting drinking friends.

When she became pregnant a second time, John wanted her to have an abortion, but she didn’t — and, when she was exhausted one evening, he tried to kick her down a small flight of stairs. When their second son was born and gravely ill, John said: ‘I wish to Christ he’d die, he’s taking up too much of your f***ing time.’

This from a man whose novels are bursting with compassion. Anyone who has read The Grapes Of Wrath can never forget the poignancy of the Joad family, so lovingly drawn by Steinbeck. Like Tolstoy, he turns out to be one of those authors who are full of empathy for their fictional characters, yet then let off steam by being vile to their non-fictional wife.

Steinbeck couldn’t abide other people’s successes. He loathed Ernest Hemingway because he’d had the audacity to be awarded a Nobel Prize. (Steinbeck’s turn would come, but not until 1962.)

He gave Gwyn a Hammond organ as a present, but regretted it when she started writing very good songs. A theatrical agent heard them and told her they were ‘magnificent’. 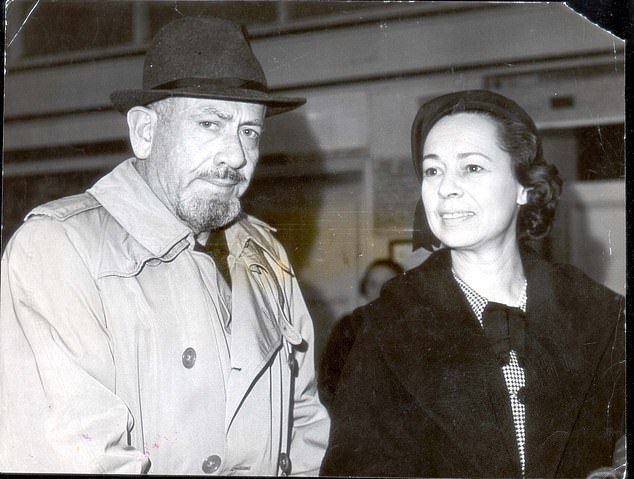 Eventually, after years of rolling over, she stood up to him. She and John were dancing together one night in 1948 when she whispered in his ear that she wanted a divorce. John would later go on to marry third wife Elaine (pictured)

On hearing this, John became ‘cranky’. In the middle of the night, he got up, went downstairs and paced about. Then he rang Gwyn on the intercom. She obediently came downstairs, bleary-eyed. John had been drinking. He screamed at her for daring to ‘get into competition’ with him by writing songs. ‘To keep the peace in our family,’ recalled Gwyn, ‘I reluctantly gave up my efforts as a songwriter.’

Eventually, after years of rolling over, she stood up to him. This is the breakthrough moment of this riveting story.

She and John were dancing together one night in 1948, when Gwyn whispered in his ear: ‘I want a divorce.’ John thought she was joking. She wasn’t.

‘I was tired of being torn up or dismantled, mentally or physically,’ says Gwyn. She went to Reno and got the divorce. You did it, Gwyn!

John went on to marry his third wife, a strong Texan called Elaine.

‘I was too soft,’ is Gwyn’s verdict. ‘He needed a mate built of brick.’

Gwyn never remarried. She died alone in Colorado in 1975, aged 58. It’s wonderful that we can hear her voice in this rediscovered memoir.