The Art of Growing Up

I used to think that John Marsden, acclaimed author of young-adult novels and the principal of two schools in Victoria, was an expert when it came to parenting advice. Then I read The Art of Growing Up. 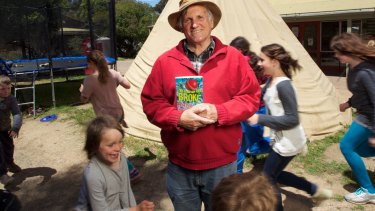 John Marsden and an earlier book at his Candlebark school in 2013.Credit:Simon O’Dwyer

Far from being the go-to source of advice for modern parents wishing to improve their parenting that it is being billed as, Marsden’s latest book is a cross between a review of classic literature and an angry rant about the people and practices he doesn’t like. It’s a long list.

Marsden begins by taking aim at "toxic parenting". Only eight pages into the book he’s explained crime, the need for prisons, domestic violence, paedophilia and "other distortions of sexual attraction", greed and reckless driving by reference to "toxic parenting".

According to Marsden, it is bad mothers who are to blame for men’s rage and violence: "Men who feel rage as a result of the failure of their mothers to effectively manage the inevitable eventual separation between mothers and their sons … are highly likely to project that rage onto future intimate partners, and often all women."

In Marsden’s world, globalisation, capitalism, poverty, misogyny, sexism, racism, the prison-industrial complex, and systemic inequality are all let off the hook in favour of toxic parenting.

In Marsden’s world, globalisation, capitalism, poverty, misogyny, sexism, racism, the prison-industrial complex, and systemic inequality are all let off the hook in favour of toxic parenting. 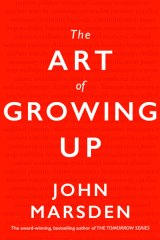 The Art of Growing Up by John Marsden.Credit:

The liberal use of footnotes might suggest that The Art of Growing Up is well researched. But while Marsden provides statistics to demonstrate the prevalence of various phenomena, such as violence against women, he provides no evidence to support extrapolations such as this: "As a result of toxic parenting, we have domestic violence."

The same applies to this bit of victim blaming: "Victims of murders are often people who, tragically, are attracted to relationships with violent abusers as a result of the abuse they themselves suffered in childhood from parents or parent substitutes."

In place of evidence, Marsden supplies a steady stream of anecdotes from his dealings with parents of children at his schools to make his case for toxic parenting.

One parent, he says, withdrew his child following a fight over the cafeteria serving raspberry jam instead of strawberry . Another father, he writes, was so controlling and neurotic he complained about dangerously high levels of radiation in the playground and accompanied his daughter inside toilet cubicles. Yet another father responded to being told about his young son’s threats of violence by shouting "Brendan is awesome" at a meeting with Marsden.

Assuming their veracity, these are surely extreme cases and, by definition, the exceptions. It’s unclear what lessons they might have for the rest of us.

The conceptual leaps, inconsistencies and contradictions from one page to the next are enough to make your head spin.

When Marsden does provide evidence to support his theories, it is obtuse to the point of bizarre. In deriding the notion of parents spending "quality time" with kids – Marsden argues "quantity time is quality time" – he quotes from Antoine de Saint-Exupery’s The Little Prince. The quote may be poetic but it’s a bit of a stretch to suggest parents today should be guided by the advice of a talking fox created by an aristocratic aviator 75 years ago.

The middle sections of the book are taken up with quotations of extensive passages from classic literature – an excerpt from Dickens runs over three pages, as does an excerpt from the Book of Genesis.

In places Marsden engages in armchair psychoanalysis of historical figures to make his case, claiming the parents of Napoleon, Hitler and Stalin were also toxic and therefore responsible for their sons’ atrocities.

While this makes for interesting reading, it does little to support Marsden’s case about the ills of present-day, middle-class parents. Say what you like about the parenting styles in the nation’s leafier suburbs, but I’m pretty certain they’re not raising a bunch of potential dictators.

The conceptual leaps, inconsistencies and contradictions from one page to the next are enough to make your head spin.

In the early pages, for example, he writes of the current "epidemic of damaging parenting" from "educated middle-class parents". But by page 126 it seems modern-day parents are no worse than parents of previous generations. "[T]he biggest single problem for well-meaning parents in Western society in the 21st century," Marsden writes "is the same problem such parents have had for many generations past. They are parenting the wrong child."

Later, the epidemic has been downgraded to a localised outbreak. "I have no hesitation in saying that the majority of teenagers negotiate adolescence gracefully, positively and in good spirits, as they have always done," writes Marsden.

If this is the case, then either toxic parenting isn’t that harmful, or it’s a figment of Marsden’s imagination. It also makes one wonder what the point was of enduring the 300 pages of Marsden’s admonishments if our kids are, after all, doing well.

There are snippets of useful advice for modern parents in Marsden’s book. He advises improving children’s language fluency by asking open-ended questions and patiently allowing children to finish their own sentences rather than rushing in and speaking for them. His advice to let kids be bored, get muddy and take risks is also welcome.

But given that Marsden seems intent on alienating pretty much everyone from the outset, especially middle-class parents, his advice is unlikely to have much of an impact. Wagging your finger censoriously at your audience like a school principal might be satisfying, but outside the school yard, it’s hardly conducive to persuasion and influence.

Kasey Edwards is a parent, columnist and best-selling author of Thirty Something and Over It (Ebury).