Larry Heinemann, a Vietnam veteran who drew on his war experiences in two well-received novels — one of which, “Paco’s Story,” startled the literary world when it won the National Book Award for fiction in 1987 — died on Dec. 11 in Bryan, Texas. He was 75.

His daughter, Sarah Heinemann, said the cause was chronic obstructive pulmonary disease.

“Paco’s Story,” published in 1986, was an unexpected winner not only because Mr. Heinemann was not well known — he had published only one previous novel — but also because of the daunting competition it beat out. Other nominees that year included “Beloved,” by Toni Morrison (which won the Pulitzer Prize for fiction a few months later), and “The Counterlife,” by Philip Roth (which won the National Book Critics Circle Award for fiction). It had been widely expected that one of them would win the National Book Award.

“When Mr. Heinemann’s name was announced,” an account of the awards ceremony in The New York Times said, “a brief silence gripped the ballroom, followed by uncertain applause.”

Among those surprised was Mr. Heinemann himself, who had traveled from Chicago for the awards ceremony at the Pierre Hotel in Manhattan.

“I didn’t come here expecting to win,” he said after the announcement. “I came here for the party.”

The selection of “Paco’s Story,” about the war and its aftermath for the lone survivor of a battle, set off hand-wringing in the literary world.

A week after the award presentation, Michiko Kakutani, chief book critic of The Times, wrote an essay pointing out what she thought were the weaknesses of “Paco’s Story” and all but saying that “Beloved” should have won. Two months later (but before Ms. Morrison and “Beloved” had been awarded the Pulitzer), 48 black writers and critics published a statement deploring the fact that Ms. Morrison, an African-American and by then one of the country’s leading writers, had never won a National Book Award or a Pulitzer Prize. 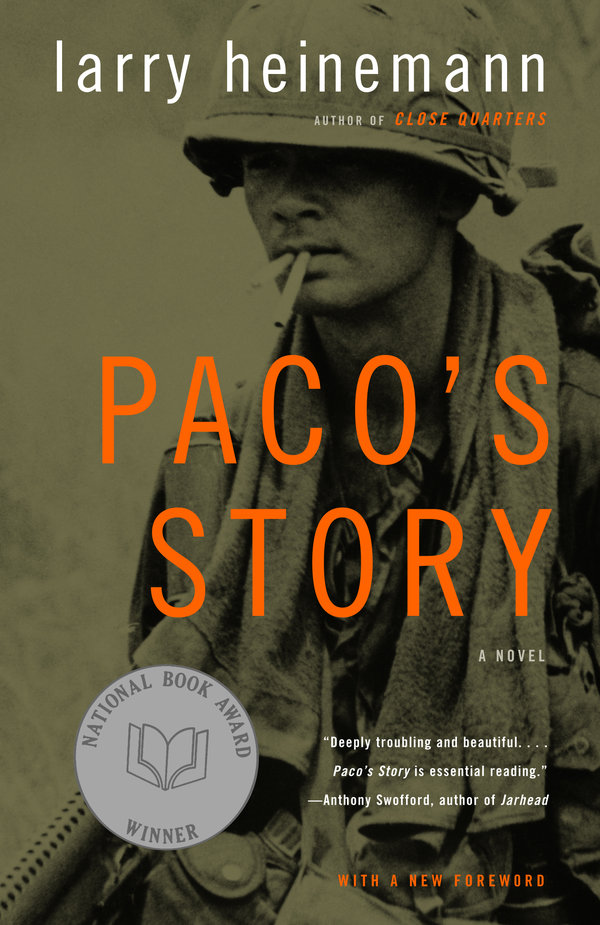 Some theorized that in picking Mr. Heinemann’s book, the three-judge panel was seeking to reaffirm the award’s reputation for recognizing out-of-the-mainstream talent. Certainly one of the remarkable things about Mr. Heinemann and his writing was that his was a voice not often found in refined literary circles.

“Larry Heinemann came from and wrote for and about the working class in this country — a class woefully underrepresented in our literary fiction,” Gerald Howard, an executive editor at Doubleday who edited and published “Black Virgin Mountain: A Return to Vietnam,” Mr. Heinemann’s 2005 memoir, said by email. “Also the class that tends to have to fight our wars for us. He told the truth about that with unrivaled power and honesty.”

Larry Curtis Heinemann was born on Jan. 18, 1944, in Chicago. His father, John, owned a small bus company, and his mother, Dorothy (Denton) Heinemann, was a homemaker who also owned a babysitting business.

Mr. Heinemann received an associate’s degree at Kendall College in Chicago in 1966, the year he was drafted into the Army. He was sent to Vietnam in 1967 as part of an infantry battalion.

“We were not pleasant people,” he wrote of himself and his fellow soldiers in a 1997 essay for the PBS website, “and the war was not a pleasant business. I have no doubt we radicalized more southern Vietnamese to Ho Chi Minh’s national revolution than we ‘saved.’”

He served a year in Vietnam. After leaving the Army in 1968 he returned to Chicago and earned a bachelor’s degree at Columbia College Chicago in 1971.

“I was not one of those guys who got home and went to their room and shut up,” he told The Los Angeles Times in 1988. “I know guys who the war’s been eating up for 20 years. Anybody who asked me about it, I told them. I shot my mouth off about everything — the whorehouses, the endless hatred, the ugliness, the real work of the war. It took two to three years of talking to get the story out.”

Then he wrote the story.

His first novel, “Close Quarters,” was published in 1977. It was the tale of an ordinary soldier in Vietnam, starkly told. In Newsweek, Peter S. Prescott reviewed it along with “A Rumor of War,” a memoir by another Vietnam veteran, Philip Caputo, that had come out at the same time.

“Larry Heineman in his novel, like Caputo in his memoir, is telling us that the Vietnamese experience was, for Americans, much worse than many of us had imagined,” Mr. Prescott wrote. “Each implies that this kind of war, with its peculiar combination of stress and fatigue, of futility and lunatic violence, batters the average American boy loose from his reason — as well as from whatever moral and spiritual resources he has.”

“Paco’s Story” largely focused not on the war but on the return to civilian life of its title character, who washes dishes at a diner.

“The Vietnam War continues to elude our attempts to represent it, just as the sublimity of storms and volcanoes challenged artists of earlier generations,” Christopher Benfey said in a review in The Times. “Mr. Heinemann’s carefully crafted, oblique narrative suggests that the right words are not going to be found in ever-more-graphic, frontal approaches to ‘gruesome carnage.’ Its horrors may be as forcefully conveyed by a haunting scene in a greasy spoon as by the tearing of human flesh.”

In addition to his 2005 memoir, Mr. Heinemann wrote “Cooler by the Lake” (1992), a lighter novel about a family of hustlers in his native Chicago. He also wrote reviews, magazine articles and short stories and held academic posts. He had been writer in residence at Texas A&M University since 2005.

Mr. Heinemann married Edie Smith in 1968; they divorced in 2014. In addition to his daughter, he is survived by his partner, Kathy Favor; a son, Preston; and a granddaughter.

Mr. Heinemann was critical of the line of argument that emerged after the war holding that the conflict had been winnable, and of airbrushed versions of warfare in general.

“Since then, several other wars have come our way, including Iraq and Afghanistan, and I don’t know about you, but I have watched and been appalled by the horror-struck nonchalance with which we seem to enjoy them,” he wrote in an essay adapted from his memoir. “We are fascinated and repelled simultaneously by the endless loop of televised imagery and skimpy narration, oiled with the patina of exaggerated patriotism. On television, at least, war has been justified and prettified in a way that is truly pornographic.”