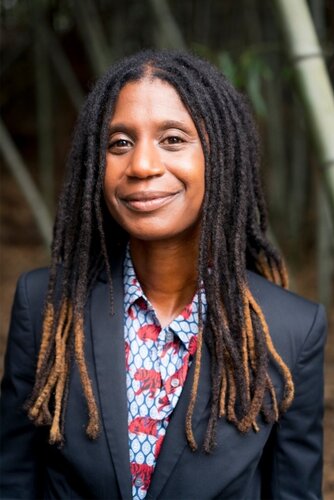 In the essay “The Site of Memory,” Toni Morrison described the crafting of her fictional worlds as a quest to access the interior lives of her ancestors. “It’s a kind of literary archeology,” she explained. “On the basis of some information and a little bit of guesswork you journey to a site to see what remains were left behind and to reconstruct the world that these remains imply.”

The title novella at the end of Jocelyn Nicole Johnson’s startling and powerful debut collection, “My Monticello,” is an apt illustration of Morrison’s concept. Not only do we join along as Johnson’s characters journey to Monticello — Thomas Jefferson’s plantation in Virginia — but we also bear witness as they rifle through and reclaim what remains in that fraught, abandoned place, refashioning its legacy to their own liking. Our proximity is part of the astonishment of this story, which thrusts upon us an intimacy with Monticello’s many physical spaces, from the welcome pavilion to the gift shop to the museum and then up a hill to the house itself, with its rooms full of a “plunder of artifacts from Native peoples,” and Jefferson’s personal, “rambling suite,” comprising a cabinet room, library and bed chamber, as well as the narrow stairwells that slaves once climbed. Up close, we cannot ignore our present-day complicity with history even as the novella moves propulsively toward tomorrow’s inevitability. Simply put, a masterly feat.

Johnson pulls off this survivalist tale with a brilliant setup: In an apocalyptic near future, a motley crew of Black and brown neighbors band together as they run for their lives, their houses set ablaze by a militia of armed white men, chanting vicious patriotisms and proclaiming “OURS!” Our narrator, Da’Naisha Love, once worked security at Monticello, so she knows the place well; she suggests the displaced group, which includes her grandmother MaViolet, seek refuge there. They take over Jefferson’s estate for 19 days, during which Da’Naisha reveals that she and MaViolet are descendants of Thomas Jefferson and Sally Hemings. As she approaches the majestic presidential plantation, built by slaves atop a hill, Da’Naisha reflects: “I’d kept real life in one place, and the imagined life of my ancestors in another unexamined place, like a room with no windows. Now my real life flailed and smoked behind me. Now this was my life.”

The novella reminds us of what fiction does best: reflect our reality back at us just when we need it most. “My Monticello” aches with both resonance and timeliness, engaging in rich conversation with recent, real-life events never far from our minds: There is the white supremacist “Unite the Right” rally in Charlottesville; there are “a record number of wildfires … heat waves and brown-outs” and demonstrations reminiscent of the Black Lives Matter protests; and the white mob, brandishing torches, calls to mind both the Jan. 6 attack on the Capitol and the 100th anniversary of the Tulsa Race Massacre (and its representations in shows like “Lovecraft Country” and “Watchmen”). A teenager “struck with the butt of a rifle” evokes the ongoing abuse and killing of Black men and boys in police custody; and the group insolated inside Monticello, trying to survive against an ever-encroaching danger, bears uncomfortable resemblance to pandemic lockdowns.

The preceding stories in the collection, prescient and wide-ranging, depict finely drawn Black characters awash in microaggressions even as they strive to be and have more. In the chilling “Control Negro,” a university professor uses his son to conduct a grand experiment to see whether life as a so-called model African American — “otherwise equivalent to those broods of average American Caucasian males who scudded through my classrooms” — will save him from the tyranny of racism. In “Virginia Is Not Your Home,” a woman named Virginia tries to outrun the namesake birthplace that inevitably pulls her back. Black boys bully another, blacker boy as they play out self-loathing within the traumatizing milieu of a public school; a woman creates an impossible to-do list for “Buying a House Ahead of the Apocalypse”; a Nigerian father living in Virginia “thinks of this exiled place as Xandria, because Alex is the name of his only son, his last best hope” — feeling tied to a place that will not yield.

Johnson dedicates the book to “my parents, who had me in Virginia and made it home,” and her deep connection to the state — its land, its landmarks, its history, its cruelty and its beauty — thrums throughout. It’s exhilarating to imagine the stories still to come from this gifted bard of a site whose remains she knows so well.