There are some characters in popular culture who you know you shouldn’t like but you do. Hannibal Lecter, Dexter, Ines from Married at First Sight. Characters who are intrinsically evil, but kind of likeable at the same time, struggling with the same human emotions as all of us. It’s just that they do bad things. Very bad things. 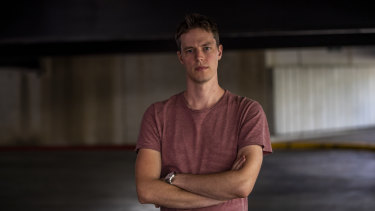 Jack Heath: “I find myself compelled to write a novel when there’s something I can’t talk about in polite society.”

Now you can add Jack Heath’s Timothy Blake to that list. He’s a consultant with the FBI, a genius who helps solve missing persons cases. He’s also a cannibal.

Heath first introduced us to Blake in Hangman in 2017, now they’re back with Hunter, the second in the series, a funny, chilling, thought-provoking book with a killer ending. So to speak.

Was Heath surprised by how people responded to Blake?

“I always wanted people to like him but I also wanted them to feel uncomfortable about the idea of liking him,” Heath says.

“In the first book I challenged myself to see how repulsive a character I could create and still get the reader on his side. With the second one, now the reader is on his side, so it was mostly a process of wanting the reader to feel conflicted about whether Blake was going to get caught or not.” 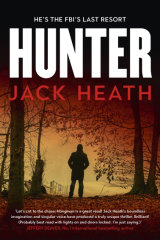 Hunter, by Jack Heath, is out on March 7.

In this book, Blake is brought on board to find a missing person. The only trouble is Blake is the only person who knows he’s already dead and tucked away –one bite gone – in his freezer. As more bodies start to go missing, he teams up with agent Reece Thistle. The pair grew up together and there’s a burgeoning love story, and it’s only a matter of time before dark secrets are exposed.

The Blake books were Heath’s first foray into writing for adults. He’s a successful children’s author with several popular series. His latest, Liars, is about a child who invents a lie detector app and releases it for free and all sorts of trouble ensues. He’s also collaborated with the magician Cosentino on a series, The Mysterious World of Cosentino, and his … Minutes of Danger books are bestsellers and one has been turned into a short virtual-reality film.

“While I was writing Hangman I thought it would be the only novel for adults I would ever write so I really threw everything and the kitchen sink in but for this one the world is a little different and I approached it a little more thoughtfully I suppose, maybe that made it darker.”

He said he’s found writing for children and adults is more similar than anyone would like to admit.

“It’s still just a process of trying to come up with a story that's suspenseful and has lots of surprises along the way.

“What is different is the marketing. I'm trying to promote my cannibal detective book without alienating the parents of any of the readers of my children's book. My adult publisher is very keen that I'm not seen as a children's writer and my children's publisher hopes that no one ever hears about the monstrous things I'm writing for adults.”

Heath’s first son, Red, is now four, and his wife Venitia is due with their second child in March. They live in a suburban Canberra home, with a lovely garden, and a shed in the back where Heath, 32, escapes to write in between raising a young family.

“Having children has certainly changed the way I write,” he says. “It’s difficult to be raising young children and having to watch what you say, I can't talk about my books in front of them, I've gotten into trouble that way before.

“But that kind of helps with the writing process. I find myself compelled to write a novel when I feel there's something I can't talk about or something that I'm not allowed to say or discuss in polite society.”