They were called the “ghost rapes.” In 2005, Mennonite women living in a secluded colony in Bolivia reported waking up bleeding, with dirty fingerprints on their bodies and fraying rope around their wrists. The elders dismissed their complaints or blamed them on “wild female imagination” — until it was discovered that men from the community had been creeping through windows at night, sedating whole households with bovine anesthetic and raping the women. At least 300 female members of the colony had been attacked, from toddlers to grandmothers. When the eight culprits were put on trial, in 2011, the women were forbidden to testify; their fathers and husbands spoke against the defendants instead.

“I felt an obligation, a need, to write about these women,” the Canadian novelist Miriam Toews has said. “I’m related to them. I could easily have been one of them.” Toews was also raised in the sect — “rigged for compliance,” she has put it — and is descended from the same Mennonite group as the colonists in Bolivia. Her celebrated novels are haunted by her upbringing, but she has never written with such heartbreak, or taken such sure aim at fundamentalism and its hypocrisies, as she does in her new book, “Women Talking.”

[ Read our profile of Miriam Toews. ]

The novel is set in the aftermath of the crimes. The men have left for the city, to raise and post bail for their brothers. Eight women from two families gather in a hayloft. Forgiveness is dictated by the religion; the women know they must absolve the men or face expulsion, even damnation. They have two days to make a decision for the female members of the community. Should they stay and forgive? Unfathomable; a 3-year-old was raped and infected with venereal disease, an old woman so savagely attacked her teeth crumbled. Stay and fight — but with what resources? Leave? Impossible; they cannot read, they possess no maps and they cannot think of abandoning their sons. The women comfort and snipe at one another. One woman, impregnated in an attack and beset by morning sickness, keeps vomiting into a bucket. They smoke, sing hymns together and weep.

Did I mention the book is funny? Wickedly so, with Toews’s brand of seditious wit. Angela Carter wrote that Grace Paley’s women were made of “flexible steel”; your average Toews character is equal parts Silly String. In her novel “A Complicated Kindness,” one sets her bonnet on fire while smoking a cigarette and has to be dunked in a water barrel. In “All My Puny Sorrows,” a woman giving a eulogy is interrupted by her toddler, who opens the urn and scoops the ashes into his mouth.

Many of Toews’s books are steeped in family grief. “Swing Low” is a memoir told in the voice of her father, who killed himself in 1998, stepping in front of a train; her novel “All My Puny Sorrows” is based, in part, on the story of her older sister, who killed herself in the same way 12 years later. But (somehow) these stories are delivered with a mouthful of ash and a lopsided grin, a stubborn sense of the absurd that recalls Philip Larkin and Lorrie Moore and feels like proof of life.

“My father died beside trees on iron rails,” Toews wrote in “All My Puny Sorrows.” “He had 77 dollars on him at the time and we used the money for Thai takeout because, as my friend Julie says about times like this: You still have to eat.” 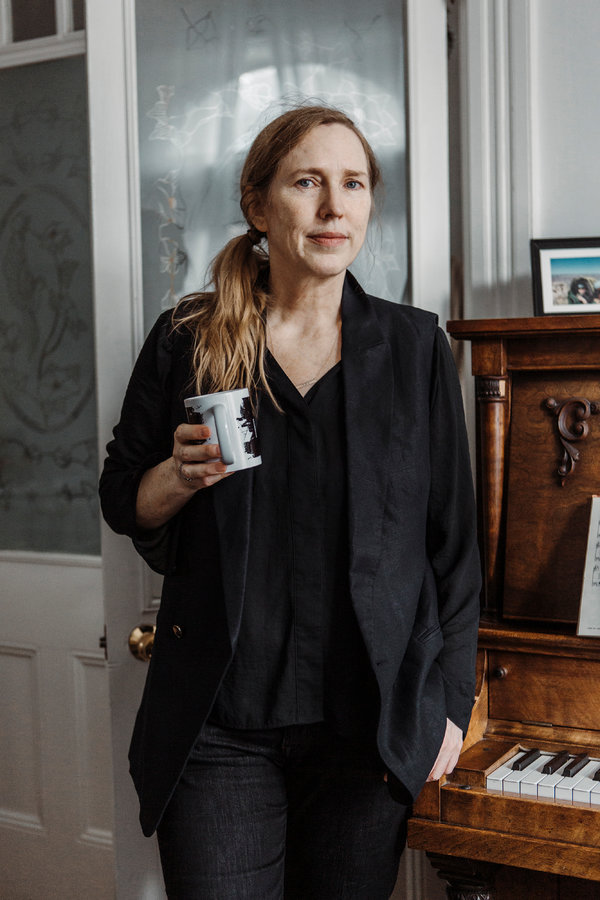 The women in the book (named after Toews’s family members) do not relate the story; a man does, one of literature’s more reluctant narrators. He introduces himself in a paroxysm of apology: “My name is August Epp — irrelevant for all purposes, other than that I’ve been appointed the minute-taker for the women’s meetings because the women are illiterate and unable to do it themselves.” He sits listening, taking notes as furiously as he can, his eyes filling with tears.

August is a man in love. His family was expelled from the community long ago (his father was discovered teaching the girls to read). He has returned for a woman — Ona, considered a spinster and made pregnant by a rape. Along with her sisters, Ona has been raised to be silent and submissive — like animals, the women themselves note, as they begin to question everything in the hayloft. Is coerced forgiveness genuine forgiveness? How can it be blasphemous to protect their children? “By staying in Molotschna,” one argues, “we women would be betraying the central tenet of the Mennonite faith, which is pacifism, because by staying we would knowingly be placing ourselves in a direct collision course with violence, perpetrated by us or against us. We would be inviting harm. We would be in a state of war.”

It is, August thinks, “the first time the women of Molotschna have interpreted the word of God for themselves.”

Their fractious, fumbling conversations take them from trauma to the foundations of democracy and the nature of knowledge as they discuss how to form a new society, salvage their religion and live with their pasts: “When we have liberated ourselves, we will have to ask ourselves who we are.”

One wishes, at times, that the voices were more individuated. The book recalls “12 Angry Men,” with its characters in a closed room fighting to come to one decision, but few of the women emerge distinctly enough for there to be any drama in their evolution. It’s the chorus that interests Toews, not character, the etiology of violence and the structures — not merely the personalities — that perpetuate it.

The ethical questions the women quarrel over feel strikingly contemporary: What are the differences between punishment and justice? How do we define rehabilitation; how do we enforce accountability? (To see these questions explored with such complexity and curiosity, with such open grief and that rogue Toews humor, makes me long for more novels reckoning with #MeToo and fewer op-eds.)

In her foreword, Toews writes that the book is “an act of female imagination,” echoing the phrase used by the elders in the Bolivian colony to dismiss the reports of the raped women. She’s not merely reclaiming the phrase but gesturing at something greater. Female imagination can produce a novel, but it has also always been an engine of migration — that insistence that another world, another life must be possible even if for some future, longed-for generation.

Up in the hayloft, Ona asks the women if they know about the yearly sojourn of butterflies and dragonflies. It takes so long, it is “often only the grandchildren who arrive at the intended destination.”