A PEOPLE’S HISTORY OF HEAVEN
By Mathangi Subramanian

Mathangi Subramanian’s novel, “A People’s History of Heaven,” follows the lives of five girls and close friends as they fight to save their slum on the outskirts of Bangalore from demolition. The slum is called Swarga, Sanskrit for heaven.

Heaven, we are told, “is nothing if not a series of crises. Men lurching home after midnight, collars and shirtsleeves blotted with blood. Women rushing to the police station to post bail for a son wrongfully incarcerated, a husband rightfully restrained. Children stumbling out of tin-roofed huts where their mother has died giving birth, cradling babies swaddled in torn up saris, blinking their newly orphaned eyes.”

It starts a little heavy-handed, as city officials are “demolishing Heaven” with bulldozers. But as the book progresses, the metaphors calm down and Subramanian finds her footing, the language taking on a musicality that is in sharp contrast to the bleak setting.

A nameless narrating chorus weaves in and out of the stories of not just the girls but the mothers and women who came before them. At times this “we” detracts from the specificities of the central characters, but it works, because this is a story of a generation, a class, a community, a gender, a world. In Heaven, the girls’ fates are as tightly intertwined as their braids. Parts of this novel read like independent vignettes, almost poetry. This is a “history” as much of a place and a time as of a people.

A plot about underprivileged girls in India runs the risk of sounding morally self-important or, worse, voyeuristic, particularly when written in English. These plots are almost always told from the safe haven of privilege, and carry the burdens of having to be earnest yet careful, and to demonstrate a sympathy that too often blurs into pity. 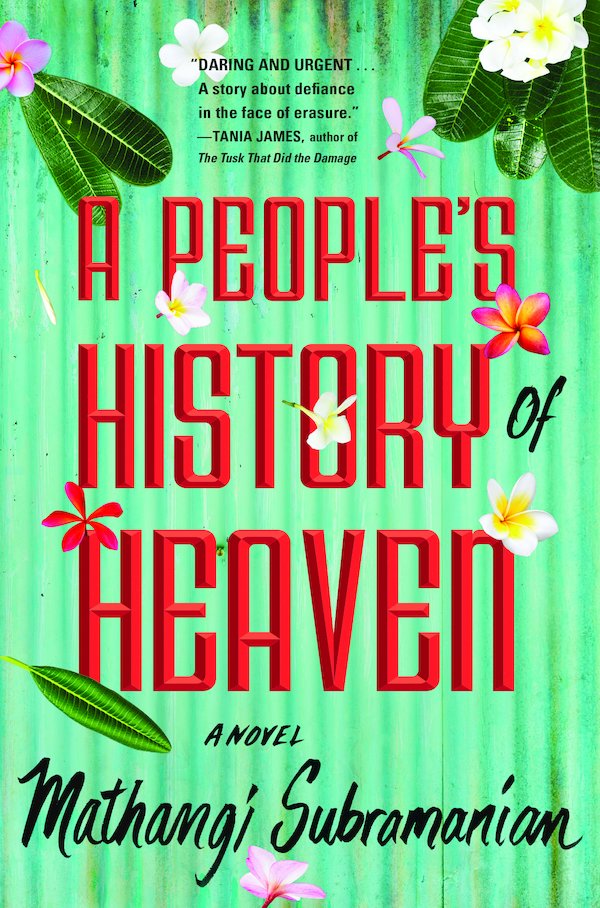 At first it feels as though we’ve read this tale before: one in which girls are hated from the minute they’re conceived, women are valued only for their wombs, men are drunk and philandering, sadness piled on top of depression sitting atop cruelty.

But then Subramanian surprises us. Moments of genuine joy (though I wish a character didn’t actually have to be named Joy) burst through.

The women are not there for our pity; they are there to be listened to, even when they speak softly. The story moves from all that is done to the girls to all that the girls do. One is transgender, one navigates her blindness, one discovers a family secret, another an unexpected sexuality, one might just be a future Banksy. The men and their cruelties fade into the peripheries. How simple, how refreshing.

A few elements are glossed over too lightly, as if perhaps Subramanian is afraid of the current or future sociopolitical climate in India. Despite the group’s interreligiosity (including a converted Christian and a Muslim among the Hindu majority, which varies in devoutness), Subramanian avoids exploring the real-life ascendancy of the Hindu right in any detail. The Hindu boys taking on the saffron-colored clothes and slogans of the nationalist extremists seem to play no role, let alone cause any tension, in the lives of this mixed community. One can hope that is how things will play out in the India outside this novel: Maybe the flexing of religion as power will remain an adolescent attempt at finding a sense of belonging, and will no longer actually tear the country or the world apart. Maybe what Subramanian is trying to give us is a sense of optimism. Because by the end, the book gives us more hope than gloom. The girls find things they’re looking for, be it a home or love or something less concrete. And, most important, they hold on to one another.

Despite its uplifting-enough ending, though, “A People’s History of Heaven” feels scattered, new characters being introduced here and there to help tie up loose threads. It is as if the author herself were unsure how to give these girls a sense of resolution after setting them up with lives so full of sadness and misfortune. Or as if she’d been planning to write a collection of poetry, but decided to write a novel instead. But like her, we too want these characters to find happy endings, so we’ll take it.

This is a strong debut by Subramanian. In the future, she might trust her readers a bit more, and allow herself the freedom to reveal a world of her creation in which not everything needs to represent something else.

Diksha Basu is the author of “The Windfall.”