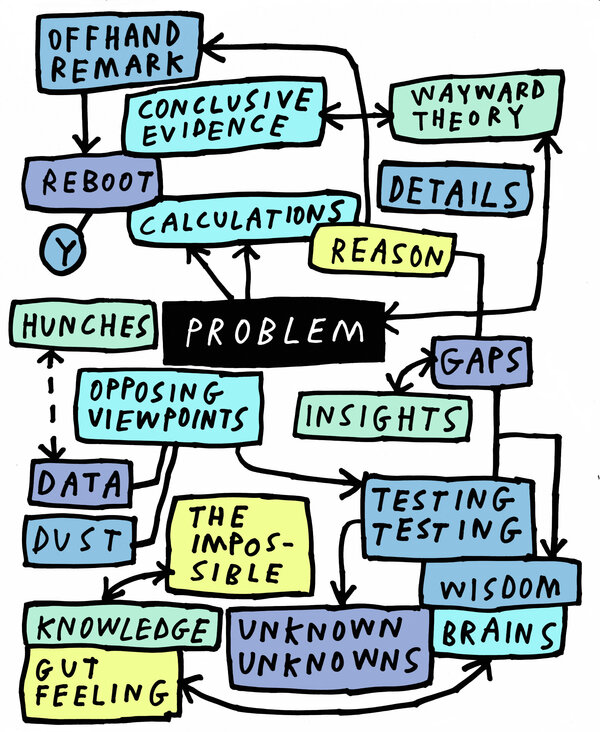 RATIONALITY
What It Is, Why It Seems Scarce, Why It Matters
By Steven Pinker

“Everything that runs has feet; the river runs; therefore the river has feet.” For more than half a millennium, starting in the 12th century, young men in Europe were routinely tortured with such puzzles. Their first college years were full of logic, mostly derived from Aristotle, who identified 14 main types of valid deduction and 13 key gambits of sophistical trickery. Such lessons were thought to do you good. One Oxford professor wrote in 1700 that they were more useful to a gentleman than learning to ride, dance or sing.

“Rationality: What It Is, Why It Seems Scarce, Why It Matters,” a new book by Steven Pinker, the Harvard psychologist, is in large part a primer on how to reason well. Similar guides for the general reader have been around for a while. John Locke wrote one over 300 years ago to help treat “miscarriages” of mortal reason. He conjectured that angels might lack our natural defects in logic, and thus have no need of books like his. In the 1800s, Jeremy Bentham, a social reformer, produced a guide to the tricks used in Britain’s Parliament, where the “give-the-dog-a-bad-name-and-hang-him argument” and the “eulogizing-lumping-classifier’s device” were supposedly rife. A list of over 30 less awkwardly named sophisms is in the most popular modern example of the genre, from the 1930s, “Straight and Crooked Thinking,” by Robert Thouless, which was reprinted as recently as 2011.

One difference between Pinker’s primer and these older works is that you’ll find more numbers in his. Probability and statistics now loom large in both straight and crooked thinking, but logic manuals generally offered only small bites of such fare. The main courses were usually a parade of fallacies, explained in words, plus formal deductive logic (which strips inferences to their skeletons, such as “Some A are B; therefore some B are A”). Pinker has now added comprehensive lessons on statistical significance, how to update your beliefs in the light of fresh data, how to calculate risks and rewards in decision-making and more. Graphics abound. To the logicians’ traditional Venn diagrams — illustrations that resemble bunches of party balloons — he adds bell curves and other graphs.

Plenty of this is unavoidably hard going. Formulas of conditional probability, in particular, may make some wistful for the torture of medieval syllogisms. Yet Pinker rightly treats the subject as valuable for clear thinking. Fumbling its application can, as he observes, lead to hypochondria and scaremongering — though a dose of math does not provide total protection against either. These lessons are taught well. Pinker’s jaunty demotic and occasional bar-stool sermons will not be to everyone’s taste, but the illustrative gags and cartoons are pedagogically apt. His deployment of perhaps the finest of Jewish sex jokes as a tool to explain the concept of “confounding variables” may deserve some sort of prize.

Pinker’s book does more than just lay out how we ought to reason. It also seeks to explain why our efforts often seem to fall short. Experimental psychology has had a lot to say on the matter in the past half-century or so, and news from the laboratory can make for grim reading. Even the simplest inferences seem to go awry for many people.

Psychologists have examined how their human guinea pigs grasp and use a basic form of valid inference known to logicians as modus tollens: “If P then Q. Not Q. Therefore not P.” It seems from experiments that about one-third of people don’t get it. And some studies find that most people think the following fallacious form of inference is logically valid: “If P then Q. Q. Therefore P.” Unkind logicians have dubbed this fallacy modus morons.

The best-known logic-defying experiment was first reported in 1981, by Amos Tversky, who died in 1996, and his colleague Daniel Kahneman, who was later awarded the Nobel in economic science for their work. In this experiment, you are given some background information about a fictitious woman, Linda, that makes it sound plausible that she is a feminist. You are then given several descriptions of her and asked to judge which are more likely to be true. They include: (1) “Linda is a bank teller”; (2) “Linda is a bank teller and is active in the feminist movement.” When groups of students were given this test, a large majority judged that (2) was more likely than (1). Yet according to the laws of probability, that answer makes no sense. It is like thinking you are more likely to be dealt the Queen of Hearts than you are to be dealt a Queen. One possibility is that in this context, some students took (1) to mean that Linda was a bank teller but not an active feminist. This would make their answer reasonable; but the morals to be drawn from the case are still contested.

Kahneman and Tversky dissected rationality with dozens of ingeniously designed tests, many of which asked people to choose between gambles with given probabilities and rewards. Their work, and that of others, led to the naming of over a hundred quirks and apparent biases. In economics, these experiments showed that our simple assumptions about what people want and what drives their decision-making are even more unrealistic than was thought. But what are the implications for logic? Are people hopelessly vulnerable to modus morons, or are these logic tests too artificial, and thus misleading? Pinker’s view, ably defended, is that our faculties work well in some settings but go wrong “when applied at scale, in novel circumstances, or in the service of other goals.”

Pinker devotes plenty of space to advocating rationality, which the authors of similar works have not found necessary to do, perhaps because anybody who chooses to read about rationality is probably already in favor of it. There is a “pandemic of poppycock,” he thinks, and more logic is needed. You might think it was impossible to exaggerate the popularity of ill-founded beliefs, but Pinker does manage it. For example, he cites a Gallup survey that found 42 percent of Americans believe in demonic possession. Yet Gallup itself rejected that result because it could not tell how many people took its question literally. Pinker also writes that “more than two billion people believe that if one doesn’t accept Jesus as one’s savior one will be damned to eternal torment in hell.” This bogus statistic includes every nominal Christian on the planet.

Like John Locke before him, Pinker wants more lessons in schools about reasoning and critical thinking. There is some evidence that such lessons work. But what part of the curriculum should be scaled back to make room for them? According to one analysis of Department of Education data, fewer than half of American adults are proficient at reading. And according to one Department of Health study, a third of adults have difficulty interpreting simple health information, such as the instructions on a drug label. Maybe it is wise to learn to walk before you learn to run.