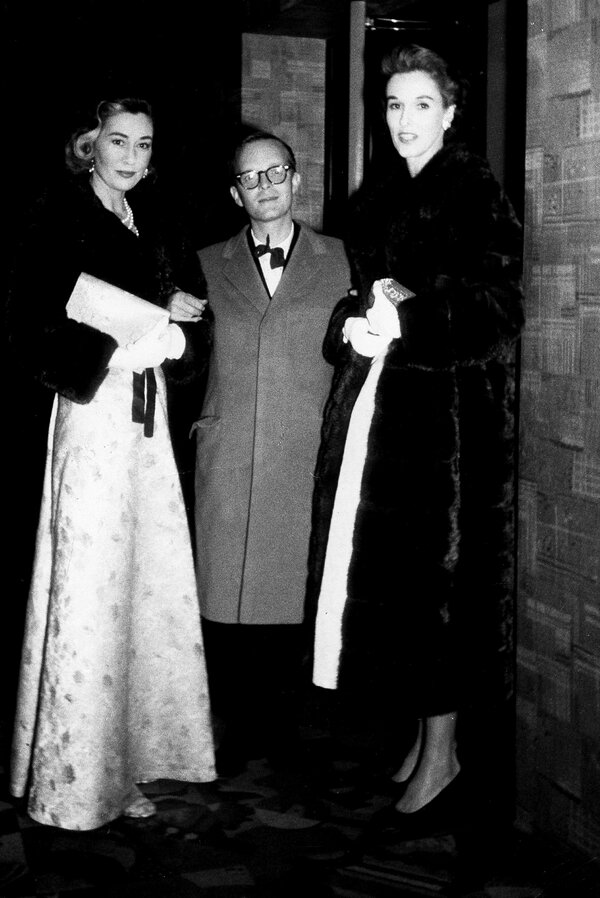 CAPOTE’S WOMEN
A True Story of Love, Betrayal, and a Swan Song for an Era
By Laurence Leamer

There’s a poem by Thomas Hardy, “The Convergence of the Twain,” which chronicles the construction of the Titanic, in all its opulence, and the simultaneous formation of its “sinister mate” — the iceberg that is set to destroy it: “And as the smart ship grew / In stature, grace and hue, / In shadowy silent distance grew the iceberg too.”

This poem came to mind as I read “Capote’s Women,” the story of the high-society women of the 1950s and ’60s who were befriended, and then betrayed, by Truman Capote, their sinister mate. In frothy prose — meals are “splendid repasts,” apartments “abodes” — Laurence Leamer describes this “coterie of gorgeous, witty and fabulously rich women.” They married well, and often, passing their days buying lunch, clothes and houses.

Capote called them his “swans.” One of them was the “gorgeous and vivacious” Barbara “Babe” Paley, who “never left the Best-Dressed List” and created “stunning” homes, “exquisitely decorated.” “Stunning” is one of Leamer’s preferred adjectives.

Another swan was Gloria Guinness, another “regular on the Best-Dressed List.” She underwent three starter marriages — to the manager of a sugar factory in Veracruz, to a German count and to the son of an Egyptian ambassador — and enjoyed affairs with, among others, a high-ranking Nazi and the British ambassador to France, before ending up with the banking heir Loel Guinness, who, as luck would have it, had recently been left today’s equivalent of $2.39 billion in his father’s will.

The trouble with reading about Capote’s swans, all so fluffy and flighty, is that it soon becomes hard to tell them apart, a struggle further complicated by the increasingly dizzying Venn diagram of their intersecting love affairs.

Their iceberg loomed in the shape of “Answered Prayers,” which Capote had surreptitiously announced to his publisher (“a large novel, my magnum opus, a book about which I must be very silent, so as not [to] alarm my ‘sitters’”) way back in 1958, shortly before the publication of “Breakfast at Tiffany’s.”

Over the years, Capote, so much more captivating than these women’s boorish husbands, had managed to slither his way into their hearts. Charmed by his attention, they were happy to exchange intimacies of their own for the intimacies of the others.

The story of how Capote published a hurtful extract from his promised book in Esquire in 1975, his ostracism by the wounded swans and his early death from liver disease, has already been expertly told in biographies by Gerald Clarke and George Plimpton.

His long-awaited masterpiece never materialized; like so many authors led astray by the blandishments of high society, he had never quite got around to writing it. His publisher called the thin, scrappy manuscript he left behind “unfinished” when it appeared in book form in 1987, but it was closer to “unstarted.” Looked at from another angle, perhaps the swans were the iceberg, and Capote the Titanic.