How the ‘slackest generation’ became our Second World War heroes: Historian who interviewed survivors identifies the key qualities which saw them through the conflict (and modern Brits should take note)

GUIDANCE FROM THE GREATEST

When asked for his advice on living a long and happy life, Captain Sir Tom Moore says: ‘I think you’ve got to be optimistic; to think that things will get better.’

As the centenarian hoiked his walking frame 100 times around his garden (eventually raising £33 million for the NHS), he focused on the kindness of strangers which helped him to ‘enjoy every step’.

Watching Moore in action — and comparing the Queen’s call during lockdown for ‘quiet, good-humoured resolve’ with the faffing of an ‘indecisive and diffident’ government — war historian Gavin Mortimer concluded that modern Brits have much to learn from the generation whose steely spirit was forged in the fires of World War II. 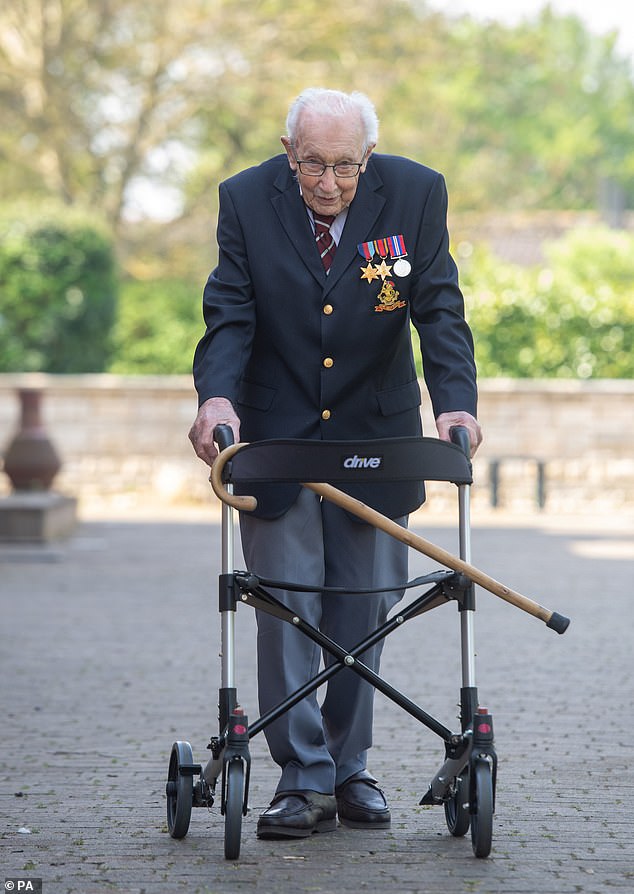 War historian Gavin Mortimer concluded that modern Brits have much to learn from the generation whose steely spirit was forged in the fires of World War II, such as that of Captain Tom Moore who raised millions of pounds for the NHS during lockdown (pictured) 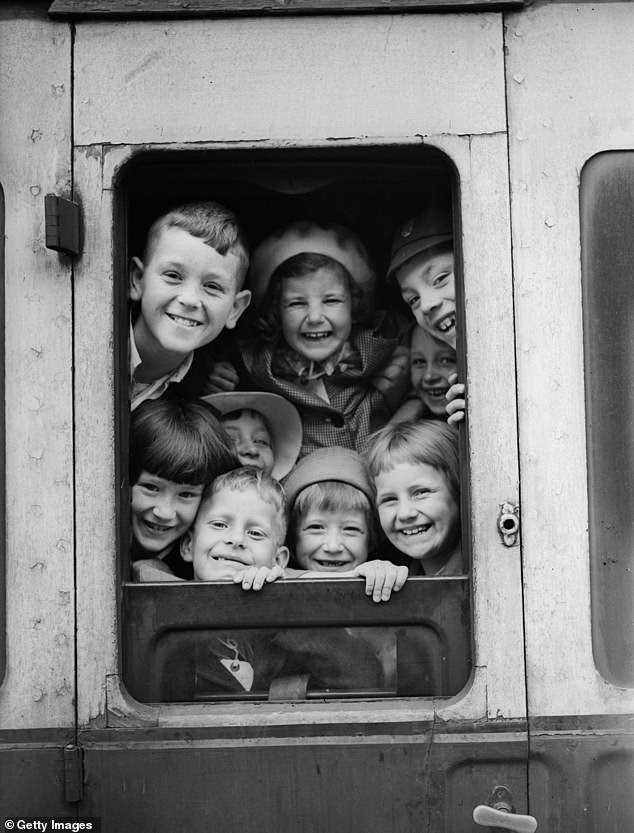 While the Second World War generation lived in the shadow of the Great War veterans, they soon proved they were not the ‘slackest generation’, as they became nicknamed. Pictured: A group of wartime evacuees at the window of a train carriage before their departure from London to safety of the countryside in June 14, 1940

Mortimer has spent his entire career interviewing survivors of the war. He identifies the 12 qualities he believes saw them through: stoicism, fellowship, ingenuity, liberality, selflessness, courage, vitality, integrity, duty, self-discipline, humour and forgiveness.

He has collected inspiring examples of each characteristic and put them into this conversational little book, which begins with a reminder that: ‘Before we get too sentimental about the Second World War (and, in the process, run ourselves down) it’s worth pointing out that in the 1930s, the so-called Greatest Generation were regarded as the “Slackest Generation”.’

Raised in the shadow of World War I, fighter pilot Richard Hillary recalled that he and his peers were ‘disillusioned and spoiled ’. Mortimer also quotes George Orwell, who was horrified at the Brits’ ‘foolish’ response to early air raids.

On April 16, 1940, Orwell described how, after the initial burst of whistle-blowing and shouting at children to go indoors, people would ‘congregate in the streets and gaze expectantly at the sky’. The gloomy Orwell predicted the bombing would eventually ‘break down morale’. 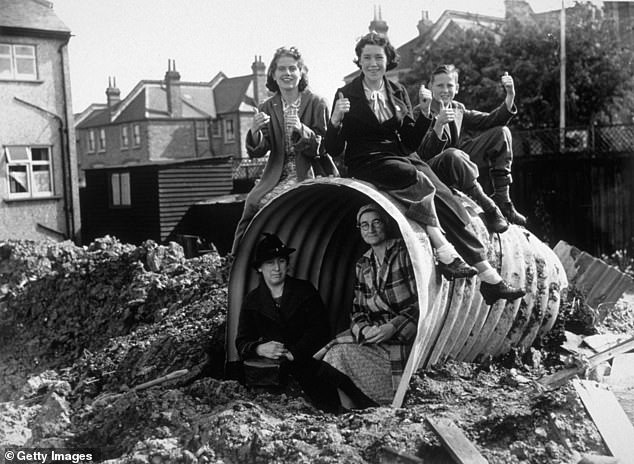 Mortimer has spent his entire career interviewing survivors of the war and as a result identified 12 qualities he believes saw them through, including stoicism, fellowship and ingenuity. Pictured: A family sitting on and in their air raid shelter in South East London 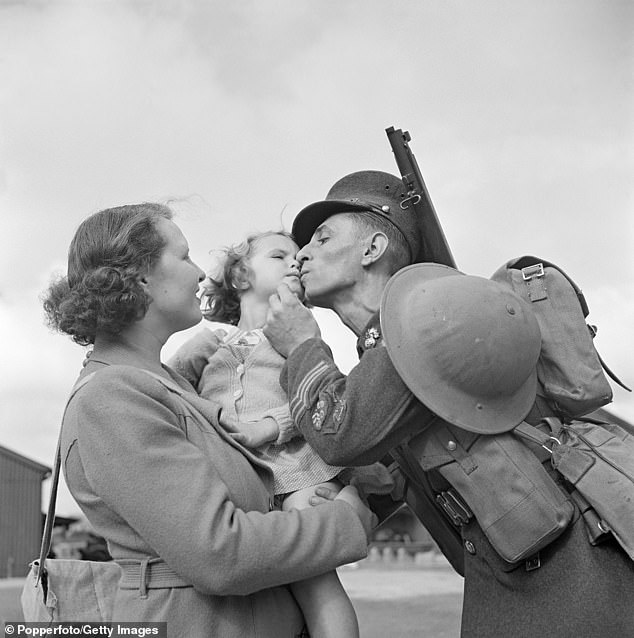 After identifying the key characteristics, he collected inspiring examples of each one and put them into this conversational little book. Pictured: A British soldier says goodbye to his wife and daughter before leaving for France on September 20, 1939

But he was wrong. Although 60,595 Britons were killed and 86,182 were injured as a consequence of German air raids, Mortimer says Orwell would be ‘flabbergasted’ to read some of the upbeat memories that Blitz survivors have shared with him.

Iris Strange was a young East Ender in 1940 and, in 2004, wrote to tell Mortimer her family were just about to eat fish and chips one night when the sirens went.

‘My dad piled all the meals on a tray and we proceeded to go down to the Anderson shelter. It was pouring with rain and Dad put up a huge umbrella, then put on his bowler hat. My mum raised her fist in the air and shouted: “You’re not going to stop me eating my fish and chips, Mr Hitler!” ’

It’s worth acknowledging that it took the Greatest Generation years to find reserves of forgiveness. 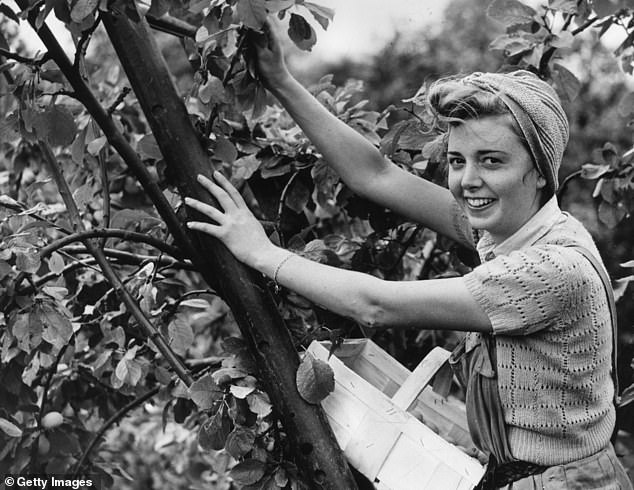 Some of the anecdotes include one from Iris Strange, who wasa young East Ender in 1940 and told Mortimer in 2004  of one evening that her family were just about to eat fish and chips one night when the sirens went. Pictured: Employee of an Oxford Street store fruit picking in Worcestershire on Auguest 13, 1940

I was touched by the tale of John Fowler, evacuated from London aged 14, shortly before the Luftwaffe dropped a bomb on his family home, killing his mother, father and sister.

He struggled with rage for many years and ‘would’ve killed any German I met’. But as he grew into adulthood, Fowler began to accept what had happened as ‘just one of those things that happen in war’. 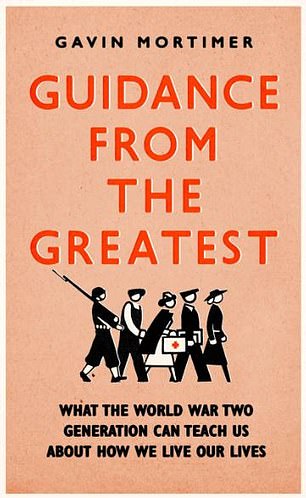 GUIDANCE FROM THE GREATEST by Gavin Mortimer (£14.99 Constable, 208pp)

More extraordinarily, Mortimer retells the story of Eva Mozes Kor, sent to Auschwitz with her twin sister Miriam in 1944. The sisters were among very few to survive medical experimentation by Dr Josef Mengele. In 1995, Eva exchanged testaments with one of Dr Mengele’s assistants and forgave him. She ‘immediately felt that all the pain I carried around for 50 years was lifted from my shoulders’.

Every generation observes the one before and makes a choice: which attitudes to discard and which to carry forward? The children of the Covid generation have their own choices to make. But, as debate polarises, they should remember that if they don’t know their history they might repeat it.

I thought of that as I read of a lad in the Essex Home Guard watching a German bomber crew bailing out of their plane in 1940.

‘I’ve a good mind to get my rifle and shoot the bastards as they come down,’ he told his World War I veteran father, who turned to his son and said: ‘Never lose your humanity… or else you have nothing left.’