THE WAR BEFORE THE WAR
Fugitive Slaves and the Struggle for America’s Soul From the Revolution to the Civil War
By Andrew Delbanco
Illustrated. 453 pp. Penguin Press. $30.

The Civil War began over one basic issue: Was slavery, the ownership of human beings, a legitimate national institution, fixed in national law by the United States Constitution? One half of the country said it was, the other said it was not. The ensuing conflict was the chief instigator of Southern secession, as the secessionists themselves proclaimed. It was thus the chief source of the war that led to slavery’s abolition in the United States.

The struggle over property in slaves focused largely on the fate of the Western territories, but it also inflamed conflicts over the status of fugitive slaves. Pro-slavery Southerners insisted that the federal government was obliged to capture slaves who had escaped to free states and return them to their masters, and thus vindicate the masters’ absolute property rights in humans. Antislavery Northerners, denying that obligation and those supposed rights, saw the fugitives as heroic refugees from bondage, and resisted federal interference fiercely and sometimes violently. Even more than the fights over the territories, Andrew Delbanco asserts in “The War Before the War,” the “dispute over fugitive slaves … launched the final acceleration of sectional estrangement.”

Delbanco, an eminent and prolific scholar of American literature, is well suited to recounting this history, and not just because fugitive slaves have been a subject of American fiction from Harriet Beecher Stowe to Toni Morrison and beyond. A traditional critic in the historicist mode, Delbanco has always thoughtfully rendered the contexts in which his writers wrote. He has offered fresh interpretations not only of how national politics shaped the writing of, say, “Moby-Dick,” but also of what Melville’s tragic awareness and moral ambiguities tell us about the temper of a nation hurtling toward civil war. Whitman, Emerson, Thoreau and Hawthorne, as well as Melville, Stowe and numerous lesser artists and thinkers of the time, all had pertinent if sometimes cursory and not always pleasing things to say about fugitive slaves. Delbanco’s incisive analyses of their observations — and, just as important, of their failure to observe — form one of his book’s running themes.

Delbanco’s skills as a literary critic also illuminate the contributions fugitive slaves made to the growing antislavery movement. Although the number of fugitives was relatively small — according to an 1850 survey, only about 1,000 per year reached the North — they disproportionally aggravated the sectional divide. In part, Delbanco argues, the runaways were a continuing symbolic insult to the slaveholders’ honor, as their flight contradicted Southern claims that slavery was a benevolent, paternalist institution. (He might have added that the fugitive slave issue became an effective and distracting wedge for pro-slavery extremists, who deployed it to appeal to conservative Northerners by provoking antislavery radicals to violent paroxysms while playing the victim themselves.) More important, scores of fugitive slaves either wrote or dictated their personal experiences in widely read narratives, most famously the “Narrative of the Life of Frederick Douglass, an American Slave,” which awakened Northern whites to the enormity of Southern slavery. 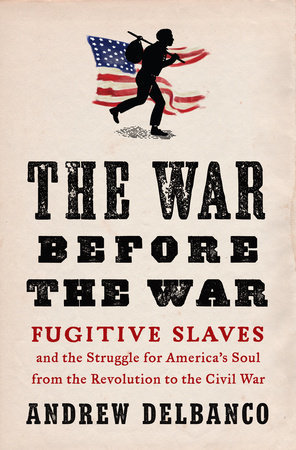 To his credit, Delbanco does not inflate the literary merits of the slave narratives. Often filtered through the sensibilities of collaborating abolitionists, they amounted, Delbanco writes, to “more than propaganda and less than literature.” (Douglass’s narrative was an exception and two or three others were at least partial exceptions.) But there is no denying the sensation they caused amid the political emergencies of the 1840s and 1850s, “giving voice to people long silenced,” and assailing the pro-slavery propaganda that sustained Northern white complacency.

Delbanco’s literary judgments aside, “The War Before the War” is mainly a straightforward account of events that, although familiar to professional historians, ought to be known by anyone who claims to know anything about American history. In 1787, Southern delegates to the federal Constitutional Convention obtained a fugitive slave clause that called for (albeit vaguely) the capture and return of successful runaways. Over the following six decades, persistent slave escapes tested the ramshackle machinery put in place to halt them. In time, alarmed but emboldened Northern free blacks and their white abolitionist allies formed vigilance committees to ward off slavecatchers, while Northern legislatures began approving so-called personal liberty laws to shield the fugitives.

In 1850, responding to slaveholders’ outcries, Congress passed a Fugitive Slave Act that strengthened the federal mandate for arresting and returning escapees. In a series of shocking confrontations, antislavery Northerners intervened, either to prevent the capture of fugitives or liberate those already in custody. The uproar of these pitched battles — Delbanco’s war before the war — helped turn Northern moderates into abolitionists and temperate Southerners into fire-eaters; at its height in 1854, it prompted President Franklin Pierce to order 1,500 federal troops to escort a single fugitive in Boston named Anthony Burns back into slavery in Virginia. Enforcing the fugitive slave law put the federal government emphatically on the side of slavery over freedom, which hastened the collapse of the national political system, the rise of the antislavery Republican Party and the coming of the war.

Delbanco aims to balance his antislavery allegiances with caution about the smugness that can come with historical hindsight. In some of his earlier writings, this wariness has led him, by my taste, to be a little too charitable to revisionist interpretations that present the Civil War as a product of political failure, a catastrophe, instigated by malcontents, that a more responsible national leadership could have prevented. This view has arisen from an admixture of pacifism and an insistence on diminishing the moral as well as political disaster of slavery; and it has sometimes led its advocates to demonize the abolitionists as the chief fomenters of an unnecessary war. As Delbanco admires the abolitionists, and slights slavery’s terrors not at all, his occasional revisionist musings seem to stem from his horror at the military slaughterhouse, his wonder at whether it could have been avoided and his wariness of sanctimony, including Yankee sanctimony.

In this book, though, Delbanco sticks to viewing the war as the ghastly but necessary price for abolishing slavery — what Abraham Lincoln described in his Second Inaugural Address as cruel justice meted out by the Almighty. Delbanco now dispels sanctimony differently, by reviving forgotten figures such as the St. Louis minister and educator William Greenleaf Eliot — not coincidentally, T. S. Eliot’s grandfather — who hated slavery but tolerated the fugitive slave law and, until the bitter end, held out hopes for a conciliatory gradual emancipation. History usually plows such people under as equivocators and worse. Delbanco restores to them their moral seriousness in brutally uncertain times.

Over all, Delbanco’s account is accurate as well as vivid (although I wish he hadn’t garbled the details of the adoption of the fugitive slave clause in 1787, the book’s most serious lapse). He makes a strong case for the centrality of the fugitive slaves to the sectional crisis; indeed, by emphasizing the symbolism of the issue, he may have slighted the importance of its political and legal aspects. Without question, he has once again written a valuable book, reflective as well as jarring, concerning the most violent and enduring conflict in American history.

Sean Wilentz teaches at Princeton. His latest book, “No Property in Man: Slavery and Antislavery at the Nation’s Founding,” was published in September.