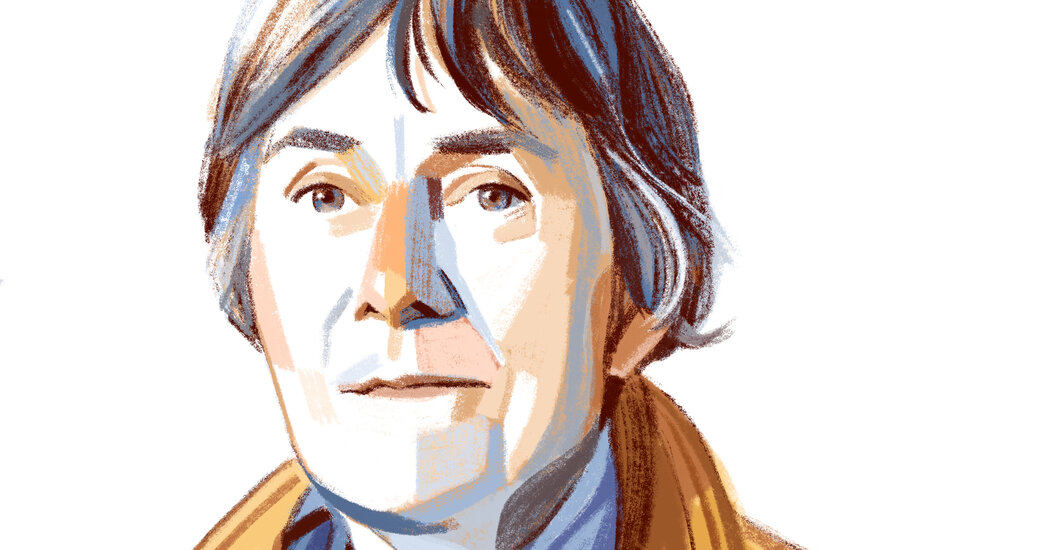 “She’s such a compassionate describer of her characters with all their flaws,” says the prolific translator, most recently of Júlio Dinis’s “An English Family” and (with Robin Patterson) Machado de Assis’s “Posthumous Memoirs of Brás Cubas.”

Well, none, since I never read in bed, but there’s always a pile next to my favorite chair. At the moment, this includes “Buddenbrooks,” which we’re reading with a group of friends, “Le Château de Ma Mère,” by Marcel Pagnol, which my husband and I are reading with our French tutor, a collection of novellas and short stories by the Portuguese writer Maria Judite de Carvalho, who I’m keen to translate more of. And Michael Gorra’s “Portrait of a Novel,” about the writing of “Portrait of a Lady” (possibly my favorite novel) which has been on my pile for far too long and should be read soon.

“Mrs. Dalloway,” by Virginia Woolf. Her prose is sometimes poetry. Listen to this: “Fear no more says the heart, committing its burden to some sea, which sighs collectively for all sorrows, and renews, begins, collects, lets fall.” And she’s such a compassionate describer of her characters with all their flaws. I hadn’t read the novel for years, and it was such a joy to revisit and rediscover it.

Yes, “Adam Bede,” by George Eliot, which I loved. Fascinating characters and such insight into ordinary working lives. The character of Hetty and her search (or odyssey) for the father of her child is one of the most touching, most heart-wrenching things I have read. “The Mill on the Floss” is more famous, but I felt that “Adam Bede,” her first long novel, was actually better and more original.

I’m a confirmed rereader of classic texts, and I’m happiest reading in our front room with my feet up and perhaps a cup of tea close at hand.

Well, Spanish-language readers might know this book, but it’s never been translated into English, so no monoglot English readers will know it: “Imagen de John Keats,” by the Argentine writer Julio Cortázar. It’s a fascinating mix of autobiographical anecdotes, an account of Keats’s life, and an analysis of some of his most famous poems. It’s a wonderfully baggy book, and clearly such a labor of love. A treat for anyone who loves Cortázar and Keats.

What book should everybody read before the age of 21?

I would say probably read everything you can lay your hands on, then reread it when you’re 40 or older to find out whether it was any good and, if so, what it was really about. But if I had to choose one it would be “The Great Gatsby,” just to see what it’s possible to do with the English language. That famous last sentence still rings in my ears: “So we beat on, boats against the current, borne back ceaselessly into the past.” Like Virginia Woolf defying that divide between prose and poetry.

In your pleasure reading, do you gravitate to any particular language?

I do love reading in Spanish, Portuguese and French, but my greatest pleasure is still reading in English.

What book, if any, most influenced your decision to become a translator?

I read a lot of Russian authors when I was in my teens without even realizing they were translations! It was only when studying Spanish before going to university that I was introduced to translating, and I just fell in love with the whole alchemical process of transforming one language into another.

What are the best books about translation you’ve read?

I haven’t honestly read any. It feels too strange to be reading about something I’ve been doing practically every day for over 30 years. And I know this is heresy, but I’m not sure there’s that much to say. For me, translating is very much something you do, like writing.

Do you count any books as comfort reads, or guilty pleasures?

Almost anything written in the 19th century would count as a comfort read for me. I’m not sure I have any guilty reading pleasures except perhaps avoiding contemporary fiction — and I do feel slightly guilty about that, but it does simplify my reading life.

When I was translating Saramago’s “Death at Intervals,” I happened to meet the Dutch translator, Maartje de Kort, who was working on it too, and we had a lovely time exchanging problems and solutions, and have remained in touch ever since. Also I do a lot of co-translations at the moment, mainly with younger translators whom I’ve mentored, and it’s a real delight to share a book with someone who knows every nook and cranny of it as well as I do. I can’t think of a book that has come between me and someone else. I did disagree quite violently with a friend about Emily Dickinson’s poetry — she thought it too death-obsessed, and I thought it life-affirming — but we’re still friends.

What’s the most interesting thing you learned from a book recently?

Well, in Bernardo Atxaga’s novel “Casas y tumbas,” I found out a lot about appendicitis, which was useful since shortly afterward, my grandson in America had to be hospitalized with acute appendicitis, so I felt better informed.

The sheer pleasure of reading wonderful prose or poetry. As well as descriptions of nature and the everyday and the portrayal of friendship. I recently reread (for probably the third time) Willa Cather’s “My Ántonia,” which is a celebration of friendship over the years. And I get huge pleasure out of Billy Collins’s ability to make poetry out of everything and anything.

What makes for a good translation?

It has to have a convincing voice, so that you, as a reader, have utter confidence in what you’re reading. Yes, it needs to be accurate and faithful (whatever that means), but if you’re translating a masterpiece of prose from Spanish or Portuguese or whatever, then your English translation should be a masterpiece too. Perhaps the biggest compliment I’ve ever had came from a friend who is also an expert on Javier Marías’s work. He said he got as much pleasure from reading my translations of Marías’s novels, as he did from the original Spanish. That’s what I’m aiming for.

In theory, by author and by language, but my bookshelves are rarely tidy, and they’re in nearly every room in the house, which means there are overflows and leakages, with books turning up where they shouldn’t.

What book might people be surprised to find on your shelves?

Perhaps “An A to Z of Fencing,” which I found when I was translating Pérez-Reverte’s “The Fencing Master,” and became friends with its author, David Morton — now, alas, no longer with us — who advised me on all the fencing terminology.

“Paintings in Proust: A Visual Companion to ‘In Search of Lost Time,’” by Eric Karpeles. A friend gave it to me when I was going through a Proust phase, and it’s such a beautiful book. And when I was a child, I was given a child’s version of “Don Quixote” and I can still remember the drawing of Don Quixote tilting at the windmills.

My favorite fictional hero is Cyrano de Bergerac, and Rostand’s play is definitely one of my favorite plays. Cyrano is at once vain and compassionate and funny and just the most fascinating person you could possibly meet. My favorite heroine is probably Elizabeth Bennet in “Pride and Prejudice” — so witty and honest and so wonderfully human. My favorite antihero is Teodoro, the wimpish clerk who becomes suddenly rich beyond the dreams of avarice in Eça de Queirós’s novella “The Mandarin.” Eça is a master of the absurd and his novels are full of such nincompoops, our cowardly alter egos.

I read whatever I could find in the children’s public library: folk tales, “The Moomins,” “Black Beauty,” “Doctor Dolittle” and anything else featuring animals. My favorite books were probably “Black Beauty” and “The Wind in the Willows,” plus Richmal Crompton’s hilarious “Just William” books of course (perhaps not much known in America), to which I still return now and then. In fact, until recently, we were members of the Just William Society and have even given “learned” papers at the society’s annual general meeting.

I used to read contemporary literature in my three main languages, but, as I said earlier, with time getting shorter, I’ve discovered the pleasures of rereading treasured classics or discovering them for the first time, as with “Adam Bede” and the lesser-known (at least to me) Thomas Hardy novels, like “A Pair of Blue Eyes,” “A Laodicean” and “The Hand of Ethelberta.” And I probably read more poetry now, especially Emily Dickinson, but also, because I now translate poetry as well, Portuguese poets such as Sophia de Mello Breyner Andresen, Ana Luísa Amaral and the Peruvian César Vallejo.

Could I have two dinner parties? In one I would invite Henry James, Eça de Queirós and Proust. They were all in Paris at about the same time and could perhaps enjoy a good gossip, although I fear that Henry James would dominate the conversation. For the second one I would invite Virginia Woolf, Clarice Lispector and Maria Judite de Carvalho. Clarice and Maria Judite are often compared to Virginia, and I just wonder if they would all get on.

Disappointing, overrated, just not good: What book did you feel as if you were supposed to like, and didn’t? Do you remember the last book you put down without finishing?

I often put down books without finishing them. The last one was George Eliot’s “Romola” (sorry, Mary Ann), which I just couldn’t get on with. It was too burdened down with erudition. I had never read any John le Carré, and a friend recommended “Tinker, Tailor, Soldier, Spy,” but I simply couldn’t see what people found so interesting. I’m possibly alone in that.

“Burmese Days,” by George Orwell, which I have never previously read. I recently reread “Homage to Catalonia,” and realized how much I enjoyed Orwell’s way with words. And in these lockdown times, I might try (with the help of an English translation) to resuscitate my barely existent German by reading Chamisso’s “Peter Schlemihl” in the simplified version I last attempted to read about 40 years ago. I fear it may still not be simplified enough.