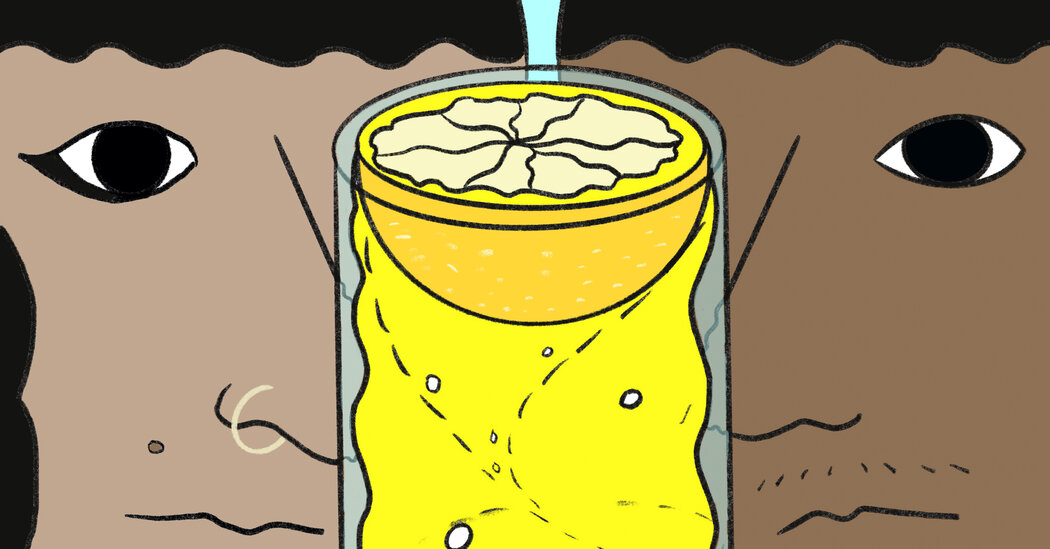 In American high schools, it is not uncommon to see stressed-out teenagers pop an Adderall or Ritalin. Maybe they have A.D.H.D., or got the pill from a friend, a dealer, a parent. The goal often being to chase not a high, but the illusion of perfection. To live up to a parent’s expectations. To perform.

In Sanjena Sathian’s debut novel, “Gold Diggers,” the teenage protagonist’s drug of choice is not quite F.D.A. approved: It is literal gold, treasures lifted from neighbors and vendors, smelted at home, mixed with sugar and lemons and imbibed as “lemonade.” The elixir instills the kind of maniacal focus — not just on a math test or school debate, but on an entire future — that is needed to “make it” as the child of immigrants in America.

Neeraj, who goes by Neil, lives in the suburb of Hammond Creek, Ga., across the street from his classmate Anita Dayal. Anita’s mother, Anjali, is the one person in town who knows how to mix the golden drink, a legacy of her upbringing in Bombay. The year is roughly 2005, and Kanye’s “Gold Digger” is playing on repeat. In this world populated mostly by “desis” (South Asians and their American-born kids), the way to succeed looks, not coincidentally, a lot like the way to succeed in the white world: Go to Harvard.

Some kids play the game dutifully. “My sister telegraphed her ambitions in the Duke poster on her wall,” Neil says. But for him, there is no poster. He fears a future limited by his “absorbed averageness” — which, for a brown person, means no future at all. That is, until his first sip of lemonade bonds him to generations of Indian ancestry.

Of the novel’s many plotlines, all are secondary to the wrenching, will-they-or-won’t-they love story between Neil and Anita. Part 1 bonds them in a verboten drug operation, though Anita’s eyes are too set on college, the Miss Teen India pageant, a fratty white boy named Sam, to really see Neil at all. A tragedy divides them further, and their final childhood exchanges, in person and via AIM (“anibun91: and sick of being only / anibun91: like / anibun91: pretty for a brown girl”), are, for all this novel’s leaps of imagination, achingly real reminders of what it was like to be an adolescent in post-9/11 America, feeling the weight of your parents’ dreams on your shoulders, but mostly just wanting to drink and make out.

The tension Sathian builds is one of teenage insecurity swelling into adulthood, until disillusion overthrows the tyranny of American perfectionism. By Part 2, Neil is a Ph.D. candidate at Berkeley who cares less about his history dissertation than about the semifictional “Bombayan gold digger,” a man he conjures, obsessively, as one of the few Hindu émigrés to the California coastline during the gold rush in the mid-1800s.

This intimate glimpse of millennials who are second-generation Americans (“conceptual orphans,” as Neil calls them) shows how history repeats. It is a story of immigrants reaping their futures from property they have found, which is not theirs — or is it? It is also a story of westward migration: from India to the United States, from the suburban South to the tech-boom Bay Area. Always, the endpoint is California, “this endlessly striving state at the end of America, where everyone was always going somewhere, and fast.”

But is this always somewhere we want to be? In Silicon Valley, the Teslas and smart fridges and apps that peddle the promise of immortality are merely the latest iterations of the pure gold that once lured 300,000 men out west, the latest tools this country has used to capitalize on the outsiders’ fears that we are not, will never be, enough. Touring yuppie houses in Redwood City, Neil has a panic attack, crouching on the carpeted floor in a pose that’s almost prayerlike. “Everyone’s ease was galactically distant,” Sathian writes, her often exquisite prose humming with contagious anxiety. “I wanted to disdain this prescribed life and yet I could not help it. … I wanted what it gave everyone else.”

Of course, a book can be its own manifestation of the American dream. Neil’s imagined Bombayan at one point joins a local newspaper, “for who would suspect a professional writer of English to be an outsider?”

“Make use of all you took,” Neil urges his gold digger, as Sathian urges Neil. “Write yourself into America.”