The Wild Bunch: Sam Peckinpah, a Revolution in Hollywood, and the Making of a Legendary Film

W.K. Stratton’s production history of Sam Peckinpah’s The Wild Bunch (1969) is a classic tale about the struggle to get a film made. All the players are there: the cranky director with his personal obsessions; the studio bean counters who simply don’t get it; the behind-the-scenes team that is generally supportive but always has problems of its own; the diverse cast that has to find a way to come together. And then there are the on-set dramas, the obstacles designed to make life difficult for filmmakers, and the post-production hassles. 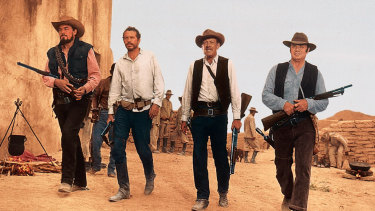 So it’s a familiar story, but The Wild Bunch isn’t just any film. An epic western released 50 years ago this year, it deals with a group of gunslingers who used to be on the same side but now find themselves adrift from each other and the changing times.

And it holds a special place in Hollywood history, most notably for the ways in which it threw down a gauntlet to the Production Code that had ruled the roost for American filmmakers since the early 1930s. In particular, in the wake of the controversy that accompanied the release of Arthur Penn’s Bonnie and Clyde a couple of years earlier, it became notorious for its depictions of violence.

No longer was the impact of a bullet signified by a casualty’s collapse to the earth clutching his (or her) chest. Now squibs filled with stage blood were attached to actors’ bodies to be detonated on cue. And in the case of the memorable and extended shoot-outs in The Wild Bunch, the cues and the casualties came thick and fast (and were brilliantly choreographed). What might today be achieved through the magic of CGI in post-production was then accomplished bit by meticulous bit. 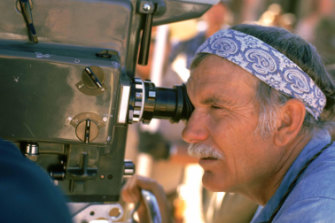 Sam Peckinpah’s The Wild Bunch threw down a challenge to Hollywood’s Production Code.Credit:Alamy

Stratton’s book is especially good at creating illuminating contexts such as this for the film. He tracks the genesis of the script from an idea born in the brain of stuntman Roy N. Sickner through various incarnations on its way to the version written by Peckinpah and Walon Green that provided an approximate blueprint with which to begin the shoot.

But Stratton’s approach isn’t simply concerned with who did what. It also focuses on the ways in which the various contributors’ personal biographies helped to shape their input. Their feeling for the film’s period settings – north and south of the Rio Grande in 1913, on the eve of World War I, and during the turmoil of the Mexican Civil War – stems from direct experience of the area and its culture.

Seen as background colour in most other accounts of the film, it comes alive in Stratton’s study. The choice of locations is guided and enabled by Mexicans whose support turns out to be invaluable. Americans might occupy the leading roles – William Holden, Robert Ryan, Ernest Borgnine and Edmund O’Brien among them – but significant figures from the Mexican film industry fill the supporting ones. Stratton’s grasp of Mexican history and Mexican film history breathes new life into the roles they play and the film’s detail.

The book is full of fascinating background information, enhanced by the exemplary thoroughness of Stratton’s research. His interviews with many of those involved – including co-writer Green, assistant director Cliff Coleman, production assistant Jim Silke, costume designer Gordon Dawson, actors L.Q. Jones, Alfonso Arau, Jaime Sanchez, Elsa Cardenas, Sonia Amelio and Chalo Gonzalez – not only indicate that this was a labour of love for him but also flesh out the production process in rich and rewarding ways. 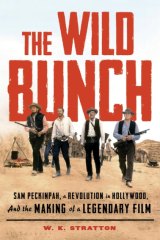 W.K. Stratton claims the label of the greatest western for Sam Peckinpah’s The Wild Bunch.
Credit:

Only when it comes to the Big Claims does Stratton disappoint. ‘‘It is clearly the greatest Western ever made,’’ he declares in the introduction, ‘‘besting Ford’s The Searchers, Howard Hawks’ Red River, and other claimants to the title.’’ If he wants to offer such an assessment, he needs to build a case for it, but all he can come up with is the lame assertion that ‘‘the significance of the story and its construction, the cinematography, the acting from top to bottom, the soundtrack – all are excellent, absolutely first-rate’’. Fanboy gush like this has no place in any work aspiring to be taken seriously.

One might also have expected Stratton to have something useful to say about how The Wild Bunch works as a Western. He doesn’t, preferring to fall back on a cliched view of the genre as self-evidently banal, as ‘‘the hoariest of them all’’, showing no awareness of the ways in which Peckinpah’s film draws on its traditions. Even though he cites one of the finest texts on the subject, Jim Kitses’ seminal Horizons West, first published in the same year that The Wild Bunch was released, he apparently remains oblivious to the concerns that Kitses deals with and that, arguably, lie at the heart of the genre.

He proposes that the film’s overhauling of ‘‘longstanding cliches from Western films’’ is what makes it distinctive. He (quite reasonably) sees that it ‘‘was the product of a nation torn by divisions unseen since the Civil War, a nation that was sacrificing thousands of its young to a war in Southeast Asia, a nation where decades-old racial strife had exploded into fiery violence in its cities and towns, a nation numbed by political assassinations, a nation where a youthful generation was wholesale rejecting values held by their parents’’.

What he doesn’t seem to get is that the Western has always been about American history, about how the nation was born, and that films are always the products of their times.

Tom Ryan’s The Films of Douglas Sirk: Exquisite Ironies and Magnificent Obsessions will be published in June by the University Press of Mississippi.