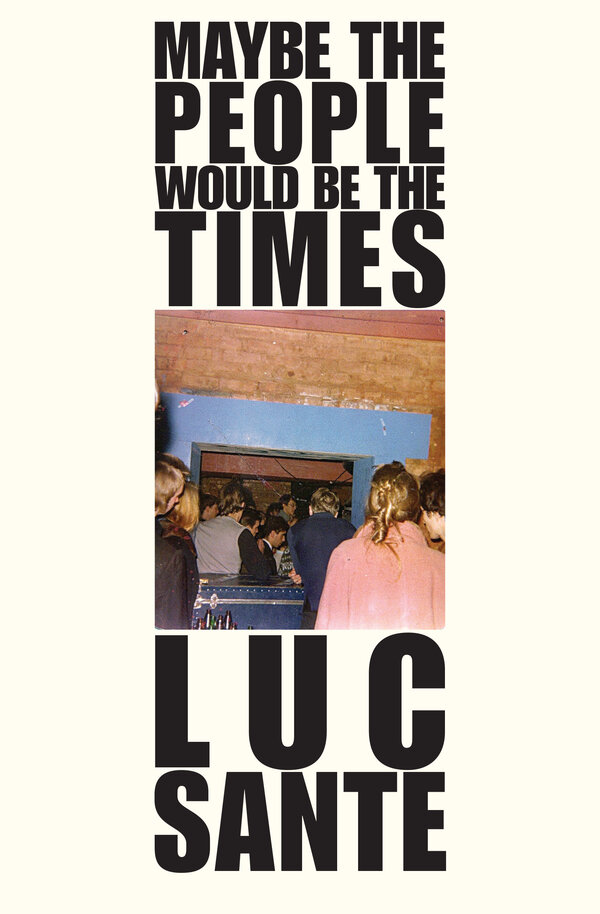 Sante’s collection of essays is a cabinet of curiosities, filled with the dark, the curious, the marvelous, the magnificent and the simply strange subjects that have passed through his imagination, mainly in the past 15 years of his work as an author and a critic.

The book opens with several moving personal reflections on the East Village music scene of Sante’s youth, and contains a lustrous oeuvre of art and cultural criticism, but its most striking pieces evade easy categories. A section of writing on photography includes staged arcade portraits, fotonovelas and a series of photos of people in masks. One mixed-media essay invents collectors’ notes for old 45-r.p.m. records. Another short piece observes the party mood of a crowd gathered at the scene of a street accident.

Sante’s cultural filter catches what others might dismiss as obscure or inconsequential. True, his interests include the likes of Sophie Calle, H. P. Lovecraft and other well-known figures present and past, but even they are examined for their fringe qualities, and their presence in this collection only elevates the importance of the doodles and shoe stores he also shows us. Perhaps anyone could write well about Patti Smith; Sante’s taste for the cultural margins is a singular gift.

In one short essay, Sante writes of a little-known photographer, Bruce Barone, calling his images of American cities in the 1970s and ’80s “annals of a former world … documented so fleetingly and obscurely that I sometimes have felt it existed only in my imagination.” This is exactly the sensation of reading Sante’s own collected works. So many treasures, snatched back from obscurity, including moments of his own life.

“If somebody thinks that ours is a vulgar time, they’re right,” the Croatian author Ugresic writes in her collection “The Age of Skin.”

Written between 2014 and 2018, these dispatches from a fitfully (or failingly) democratizing post-Soviet Europe reach across politics, art, the media, popular culture, feminism, fashion and technology with a unifying theme: cultural decline, or more precisely for democratic societies, cultural self-destruction.

Over nearly three decades, Eastern Europe’s “imaginary” — its collective idea of its values and character — has been strafed with atrocities that range from war and genocide to simpler outrages, such as crooked politicians who refashion themselves into artists. Media gets much of the blame for this deepening ugliness; “thanks to the media, stupidity has now gone global,” Ugresic writes. As a result, cultural memory has been obliterated; political corruption is endemic; celebrities have been elevated to heroes; mediocrity and cynicism reign.

A major literary voice in Europe, Ugresic brings deep personal insight into the grinding despair and destructive nationalism of post-communist societies, often writing with lively, ironic flair keenly translated by Elias-Bursac. Do Lenin’s mummy, Adele and Croatian unemployment have any business being in the same essay together? In this book, yes. Gladly.

Not too long ago, this collection might have inspired gratitude for American democracy, once characterized by its optimism, a beacon to the world. Today, it is striking to read about post-Soviet Europe and recognize ourselves, including the creepy sense of Russia’s unchecked influence in our struggles. Ugresic’s warning is unvarnished.

“The true terror begins,” she writes, “when we begin to feel there is nowhere left … that all destinations are equally bad.”

In the title essay of her collection “Mobile Home,” Harlan cites a renowned book on the history of housing that notably excludes mobile homes, as if to refuse their legitimacy. “We can’t just have everyone rolling around, parking and sleeping hither and yon,” she writes, imagining the voice behind this dismissal of houses with chassis. Viewed this way, mobile homes are impermanent and thus do not cultivate neighborhoods or communities; people may crave mobility, but a functioning society requires foundations.

Harlan and her family moved 17 times while she was a child, following her father’s work as an engineer across four continents. Impermanence defined her early life, and is a resonant ache in this linked-essay memoir. Her meditations on the meaning of places, houses and homes are rooted in her nomadic experience, if nomadism can be said to root anything.

The personal history emerges as Harlan examines the worlds she rolled through, the effect of those many uprootings on her family, her father’s alcoholism and eventual death, and her commitment to raising her own child differently. These stories are attached to topics that travel just as widely, including the varieties of nomadic living, ancient Saudi ruins and Joseph Eichler’s Northern Californian tract housing. Spider webs, trailers and Dorothy’s Kansas all help define what a home is, and what it might mean to have one.

And what is a home? Is it an idea, a structure? For many years, Harlan could not say where hers was, so her answer is complicated. Perhaps, these essays suggest, home is after all the place that is ours — whoever and wherever we find ourselves to be.

Literary form followed function in the late 1990s when, anticipating the internet’s revolutionary impact, “flash” prose came into fashion. In the future as it suddenly appeared, blog posts would replace essays; books would move to e-readers or cease to exist, and hyperlinks would end narrative as we knew it. All this screen-reading, incidentally, would erode our patience for long forms.

Rather than lead to a literary cataclysm, technology so far has created a literary multiverse in which new and traditional forms coexist. Evidence of this can be held in your hands, in a new anthology — published in print, no less — from Brevity, an online journal founded at that first recognition of change.

Twenty years on, flash nonfiction, epitomized by the 84 essays Brevity’s editors chose for this collection, endures largely because those who write it quickly mastered the craft. There is no formula; these essays of 750 or fewer words include lists and “found” essays, lyric essays, researched essays, even graphic memoir. They work because they are efficient on the sentence level, cutting to the rhetorical nub without sacrificing their power to evoke.

The immersive effect of reading this anthology straight through is the opposite of a flash experience, and is also lovely, like rolling down a sidewalk of lit windows. A 2-year-old nestles with a bear, drunken men fight in the street, 30-foot stone heads sit on Easter Island. So much beauty, so much grief — the whole range of experience flashing by, leaving impressions as it passes.