From “There Must Be More Than That!”Credit…Shinsuke Yoshitake

Shinsuke Yoshitake, the popular Japanese author-illustrator of many award-winning books, including “I Can Be Anything” and “The Boring Book,” considers how overwhelming the future can be to a child in THERE MUST BE MORE THAN THAT! (Chronicle, 32 pp., $18.99; ages 5 to 8).

When a little girl’s brother tells her “our future is doomed,” mentioning the specter of food shortages, wars and, yes, even plagues, the girl runs in a panic to her grandmother. Wise granny reassures her that we can never know for sure what the future will hold and that we shouldn’t think only in terms of good and bad scenarios. 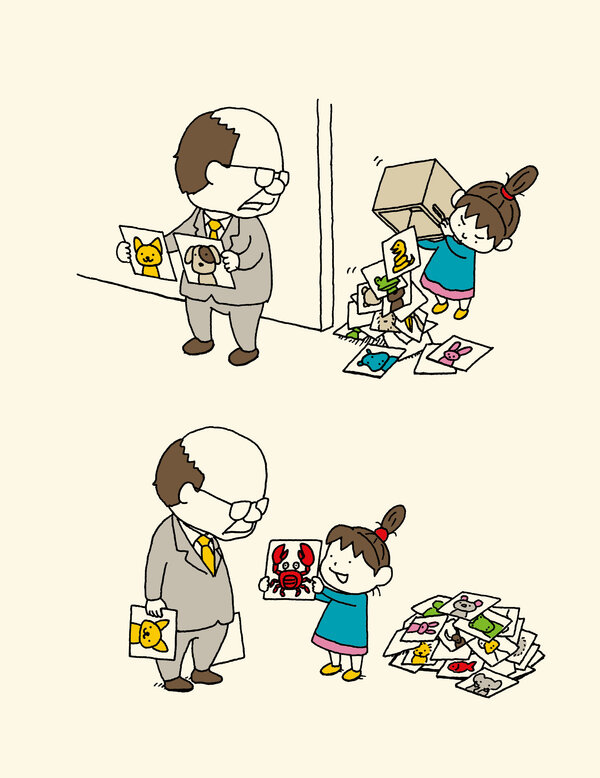 As a result, the main character begins to imagine many possible futures, including whimsical ones where there are hot dogs every day, it’s OK to spend the entire day in pajamas and your room has a zero-gravity switch. Although she can’t control the future, she can control how she thinks about the future.

Yoshitake is a master of thoughtfully working with a Big Problem — in this case, the future — and recasting it in an approachable, humorous way that a youngster can deal with. The pictures that accompany the text, drawn in an unadorned cartoon style in primary colors, do a good job of briskly moving this entertaining, yet serious, story along.

LITTLE AUDREY’S DAYDREAM (Princeton Architectural Press, 56 pp., $17.95; ages 10 to 12) details Audrey Hepburn’s childhood in Europe during World War II. Growing up in Holland, Hepburn lives through the Nazi occupation of her country, aerial bombing raids by the Allies and food shortages. Near starvation, Audrey and her family are reduced to eating “green-pea bread, dog cookies and tulip bulbs.” Midway through the story, the book shifts into Audrey’s daydream of her future, one where she stars in movies, has a family of her own and, in her later years, travels to countries that are still at war and helps to feed hungry children.

It’s a charming fairy tale, although the shift into the extended daydream may leave some readers a bit puzzled (it did me) because of the vague handling of time, place and incident. But perhaps this is the point: A biographical note at the end makes clear that all the things the storybook Hepburn fantasized about as a child really did happen in her adult life. The fact that one of the authors of this seemingly too-good-to-be-true tale, Sean Hepburn Ferrer, is Hepburn’s daydreamed-into-existence oldest son (his wife, Hepburn’s daughter-in-law, is the other) winks at its central conceit, that the seeds of what we will become are within us from our earliest days, and adversity can make us stronger and more determined.

The illustrations, in colored crayon, by Dominique Corbasson and François Avril, are done with a light, accomplished hand and succeed in stylistically mirroring Hepburn’s own wispy, gamine quality. One of my favorites is a picture of the young Hepburn in her nightgown, in a Chagall-like flight of fancy, flying over some of the world’s famous landmarks.

If “Little Audrey’s Daydream” begins with a firm footing in reality, Ben Hatke’s JULIA’S HOUSE MOVES ON (First Second, 40 pp., $18.99; ages 4 to 8), a sequel to “Julia’s House for Lost Creatures” that also stands on its own, is built on a fantastical premise: A little girl named Julia lives with a gang of goblins, trolls, robots, a mermaid and a ghost in a rickety seaside house perched on a giant turtle’s back.

When the house and housemates become “restless” — we’re not told why — Julia decides it’s time to move on. “I have a plan for this,” she says. But when the giant turtle carries the house into the sea before Julia has finished packing, her plan goes awry. As the house starts filling up with water, Julia comes up with another plan: They will swim. But sharks appear. More plans are made, and just as quickly thwarted. Ultimately, the house is saved from sinking by a deus ex machina, the Queen of the Sea. As the story ends, a helpful ghillie, a kind of benevolent Scottish fairy, grows and grows until — like a hot-air balloon — it lifts the house up into the sky. Catastrophe avoided!

The twists and turns of the story come out of the blue, but the book contains a timely lesson for the worriers among us: Stop overplanning, let things happen and hope for the best.

Hatke, who won praise for the illustrations in his best-selling Zita the Spacegirl graphic novel series, continues to delight with these glowing ink-and-watercolor illustrations.

The most captivating and original book here, and my favorite, is the Latvian artist Anete Melece’s THE KIOSK (Gecko Press, 40 pp., $18.99; ages 5 to 9). It began life as a six-minute animated short, which won prizes at film festivals around the world.

Olga, the main character, is a large, likable woman who lives, works, eats and sleeps in her kiosk. Unable to leave it when her workday ends because she can’t squeeze through the narrow door, she spends her evenings eating, reading travel magazines and dreaming of “distant seas with splendid sunsets.”

In a further absurdist twist, Olga’s world is literally turned upside down when her kiosk tips over. Righting herself, she realizes she doesn’t have to stay in the city; she can go anywhere. It’s an Alice-in-Wonderland moment, with a giant Olga carrying the kiosk on her shoulders through the city’s busy streets. Eventually Olga and kiosk arrive at the seashore, where she goes into business selling ice cream and watching the sunset every night.

The pictures of Olga are wonderfully inventive and strange, done in bright colors reminiscent of Matisse paintings.

A parable for our time, “The Kiosk” is about escaping a confining routine and finding something better, about being “stuck,” as Melece herself has described it, and figuring out a way to “start a journey to your happy place exactly as you are.”

Elizabeth Spires is the author of the poetry collection “A Memory of the Future” and the forthcoming picture book “Kate’s Light.”