Each week, Benjamin Law asks public figures to discuss the subjects we're told to keep private by getting them to roll a die. The numbers they land on are the topics they're given. This week he talks to Lionel Shriver. The American-born, London-based writer, 62, is the author of more than a dozen novels, including the prize-winning We Need to Talk About Kevin. Her latest book is the short-story collection, Property. 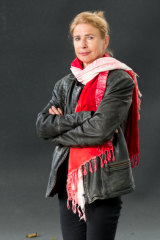 DEATH
Your father was a Presbyterian minister. How was death discussed in your family, growing up?

Christians believe that when you die you go to heaven. They’re divided about the hell part. But there was never a lot of emphasis on that in our family. What interests me more is that my mother had a stroke a few years ago, and my father was understandably in a sober frame of mind. It was an opportunity to press him a little on what he really believed. It turns out, he doesn’t entirely believe in life after death.

So that was a huge revelation, given he’s a minister?

It was fascinating. It mirrors, in some ways, a change in his father – my grandfather – who, towards the end of his life, more or less didn’t really believe in God anymore. That’s going in the opposite direction that you’re supposed to, isn’t it? You’re supposed to get a late conversion; you’re trying to cover your bets. [Laughs]

How has your mum’s stroke, and the death of your older brother, Greg – whose death inspired your novel Big Brother – reframed your perspective on living?

It makes life seem more precious. Losing my older brother has made me consciously treasure my younger brother [Timothy] even more; I really cling to him.

How do you want to be remembered?

As a person, I would like to be remembered as bearable. [Laughs] Anything more than that is aiming for the moon. I’m not naive about literary legacy. Writers die. If it turns out that interest in my work dwindles and eventually disappears after my death, that’s okay. I’m writing for the present. That’s enough for me.

[Sighs] I believe the EU has grown into an autocratic behemoth that most citizens of Europe never intended to join. It serves the interests of a very small elite at the top, who regard themselves as benevolent, but I’m not a big believer in the possibility of benevolent dictatorship. The UK leaving the EU could be a good kick up the backside for the institution. Free movement of people, while a nice utopian vision, doesn’t really work when all the migration is pretty much one way. But put a gun to my head, and I could make a cogent argument for staying [in the EU], too. I don’t think it’s clear-cut.

You live in the UK, but you are an American citizen. You’re anti-Trump. Why?

I’m much more concerned with the fact that he’s incompetent than the fact he’s morally defective.

You do think he’s morally defective, though?

Yeah, I do. High office often attracts egomaniacs; you need a lot of ego to want to become president of the United States. But his exclusive concern is with himself and he’s ignorant. He doesn’t know anything about government or how government works, and he seems like someone who’s potentially a demagogue.

You’ve expressed concern about identity politics; that anxieties about cultural appropriation can introduce a sense of self-consciousness in white writers, when writing characters from other backgrounds and races. Is that necessarily a bad thing, given …

… writing from other ethnic and racial perspectives is a dicey task?

There’s a difference between being deliberate and being self-conscious. There’s an even bigger difference between being self-conscious and being fearful. What I’m talking about is [the danger of] playing it safe because you don’t want to get into trouble. White writers are now put into a bizarre bind, because on the one hand they’re told that the world is changing, and you need to …

Yes. Books set now need to show what life is like now. That would seem to imply having an inclusive cast of characters. Then you’re told you can’t write any of them. I just don’t think these kind of structures are in the interest of anybody: not for writers, for the exercise of their imaginations, or for the readership, either.

MONEY
What do you wish you knew about the financial realities of writing when you were starting out?

Hmm, I’ll put it another way: I’m glad I didn’t know how insecure a profession it is. [Laughs] It doesn’t just take bravery. It also takes a measure of ignorance.

You wrote around half a dozen novels prior to We Need to Talk About Kevin. Were you making much money before that book blew up?

Oh, practically nothing. Very modest advances. By the time the fourth and fifth book came along, I was only publishing in the UK; the advances were ludicrous. But there was a good side to all of this. First off, I inherited my parents’ frugality, so I was economically and temperamentally equipped. So I did manage through those years. Furthermore, because I wasn’t getting paid enough for my novels to pay the rent, it forced me to start writing journalism and opinion pieces. It expanded my skills. Sometimes, being a little desperate can push you to be resourceful in a way that pays off.

If you weren’t doing what you’re doing now, how would you like to make money?

I’d be a figure sculptor. I did it seriously for years when I was in Belfast [from 1987-99]. I enjoyed that process even more than the process of writing, which of course is sometimes very frustrating. I liked the non-verbal part of it; that to do it, I shut the f… up. [Laughs].

Lionel Shriver will speak on “Creativity in an Age of Constraint” on September 3 in Sydney and September 4 in Melbourne, courtesy of the Centre of Independent Studies.

To read more from Good Weekend magazine, visit our page at The Sydney Morning Herald, The Age and Brisbane Times.