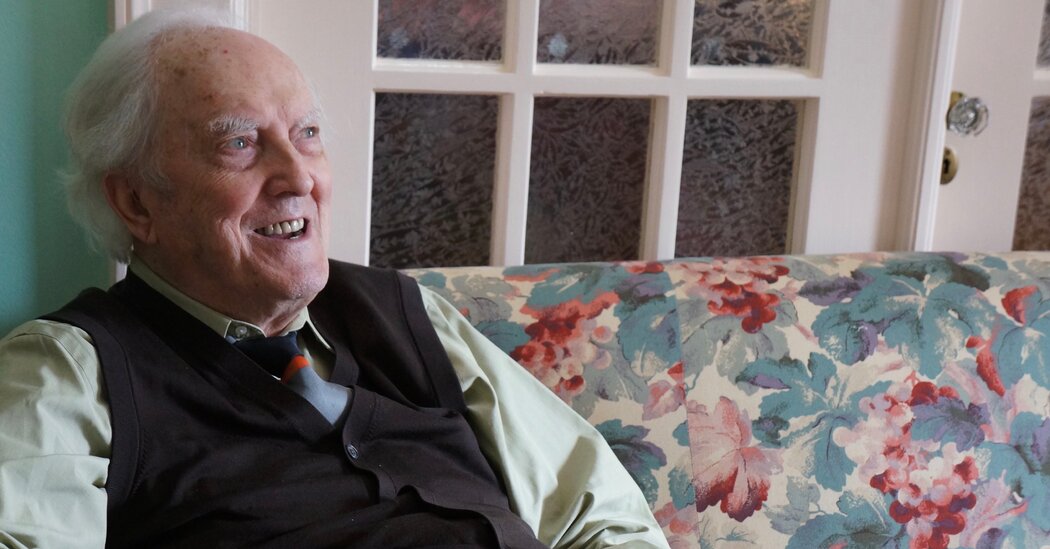 Denis Donoghue, an Irish academic whose wide-ranging literary tastes, erudite analysis of poets like T.S. Eliot and William Butler Yeats, and fierce aversion to the impositions of postmodern theory earned him a reputation as one of the last great humanist critics, died on April 6 at his home in Durham, N.C. He was 92.

His death was confirmed by his daughter Emma Donoghue, the novelist.

First at University College Dublin and later at New York University, Professor Donoghue carved out a middle ground in the contested landscape of late-20th-century literary studies, standing opposed to both the politicized theories of the left and the traditionalist pieties of the right.

He was an ardent opponent of deconstruction, and in the late 1970s and early ’80s he wrote lengthy takedowns of its leading proponents including Jacques Derrida and Paul de Man. But his criticism later softened. At least the deconstructionists paid close attention to texts, as he did, unlike the real objects of his derision: what he called “ideologically opportunistic” theories that, taking a page from Marxism, saw literature as little more than a social construct to be analyzed alongside things like comic books and soap operas, and that criticized as hopelessly bourgeois the sort of close reading he performed.

“If I am listening to a quartet by Bartok or reading ‘Nostromo,’” he wrote in his book “The Practice of Reading” (1998), “I should not be using the occasion to plan my next move in the class struggle or the war of all against all.”

Although he was never associated with an intellectual movement or theory, there were certain throughlines in Professor Donoghue’s work — above all his fascination with the irrational, almost mystical quality at the heart of the creative process.

He expounded his views prodigiously. As an author, co-author or editor of more than 30 books, he also contributed lengthy essays to learned publications like Salmagundi and The Sewanee Review and punchy shorter pieces to The New York Review of Books and The New Republic. He had just finished writing a book on the later novels of Henry James when he died.

In the late 1980s he shared a weekly rotating column in The New York Times Book Review with Anatole Broyard, Cynthia Ozick and Marilynne Robinson, a position that allowed him to write expansively not just about books but about whatever caught his mind.

“He thought it was a great thing to be able to write about Jonathan Swift one minute and Lady Gaga the next,” his daughter said.

Professor Donoghue was a lifelong devotee of postwar American literary critics, in particular poet-critics like Allen Tate, John Crowe Ransom and Kenneth Burke. A favorite memory from his undergraduate years was receiving a handwritten letter from Mr. Ransom, the editor of the Kenyon Review, accepting one of his essays.

He was equally proud of his skills in the classroom. He could speak for an hour without pause or notes, dominating the lectern with his 6-foot-7 frame.

In a 2003 speech, the writer Colm Toibin, who studied with Professor Donoghue in the early 1970s, described his “heightened tone, the lack of hesitation, the thinking aloud as fierce and eloquent activity, and the sense also that this mattered more than anything else mattered — this attempt to analyze and define and almost imitate layers and levels of feeling, of imaginative energy, of tonal nuance.”

Denis Martin Donoghue was born on Dec. 1, 1928, in Tullow, a village in southern Ireland, and grew up in Warrenpoint, a seaside town just over the border into Northern Ireland.

His father, also named Denis, had been a sergeant in the Royal Irish Constabulary, a police force. After Ireland won independence in 1922, he was allowed to stay on with the Royal Ulster Constabulary in the north, though he had little hope for advancement as a Roman Catholic in the British-run and Protestant-dominated unit.

Young Denis’s mother, Johanna (O’Neill) Donoghue, was a homemaker who took care of him and his four siblings. They lived in the married quarters of the constabulary barracks, beside a tall concrete wall built to protect them from attack by Irish nationalists.

He took to reading early, and though his parents were not bookish, they encouraged his interests. In his memoir, “Warrenpoint” (1990), he wrote that his love for his stern but kind father set the tone for his love of the written word as something to be revered. “I am sure,” he wrote, “that the authority of a written sentence and the authority of my father were one and the same.”

He studied Latin and English at University College Dublin. He also studied lieder singing at the Royal Irish Academy of Music.

Professor Donoghue married Frances Rutledge, a former teacher and flight attendant, in 1951. She died in 2018. In addition to his daughter Emma, he is survived by his second wife, the novelist Melissa Malouf; four other daughters, Barbara Nelson and Celia, Helen and Stella Donoghue; three sons, David, Hugh and Mark; 11 grandchildren; and two great-grandchildren.

After graduation he took a position in the Irish civil service, which made him miserable. Three years into the job, he encountered one of his old professors on a Dublin sidewalk and told him how unhappy he was. His mentor offered to make him a lecturer at the university.

He went on to receive a master’s and a doctorate in literature at the university and another master’s degree from Cambridge, where he lectured from 1965 to 1966. He returned to Dublin a full professor, and remained there until 1980, when he moved to New York University.

His position at N.Y.U. required just one semester of teaching a year, allowing him to spend the rest of his time back in Dublin with his wife and children — and, of course, his energetic writing schedule.

He and his wife ran their family like a writers’ retreat, the house full of books and both of them on hand to discuss them.

“Words were treated as holy things in our family,” Emma Donoghue said. “My parents let me read and write, and read and write. It wasn’t the sort of oppressive childhood that every writer seems to need, but I found it a source of endless energy.”

He was overjoyed when his daughter became the author of critically acclaimed novels like “Room” and “Akin” — perhaps, in part, because he was almost completely incapable of writing fiction or poetry himself.

“I have never been able to tell a story or even to recall one,” he wrote in “Warrenpoint.” And despite his lifelong devotion to the study of the creative process, that was OK with him.

“It did not grieve me that I lacked inventiveness, could not make up a story or imagine a sequence of thoughts requiring rhyme,” he wrote. “Mine was the intelligence that came after.”