By the end of the first chapter of “The Nightworkers,” a painter and fentanyl dealer named Emil Scott is dead. To tell us how he ended up that way, Selfon’s thriller takes us back in time to describe a rogues’ gallery of ex-cons and petty crooks involved in or circling around a money-laundering operation in Bushwick, Brooklyn.

As a former chief investigative analyst for the Brooklyn District Attorney’s Office, Selfon clearly knows his way around a criminal conspiracy. His ringleader here is Shecky Keenan, whose beloved niece Kerasha is newly out on parole. Along with Kerasha’s cousin Henry, they form a family business whose services include helping people avoid unnecessary entanglements with the I.R.S. or pay college tuitions in cash without raising eyebrows.

Some of the bank accounts Shecky relies on have closed for unknown reasons. There’s also a mysterious blue Chevy Impala parked on their street a bit too often. Perhaps it’s a hit man. To make matters worse, Kerasha’s kleptomaniacal habits threaten to cause her even more trouble, and Henry, straddled with some kind of debt, is keeping company with a nogoodnik murderer named Lipz.

More and more characters keep arriving, like dozens of clowns out of a tiny car. Against his uncle’s wishes, Henry recruits Emil to pick up a bag and deliver it and, well, we already know how that works out. We don’t know, however, what has happened to the quarter-million dollars he carried or what will become of Shecky as more threats are made against his shady business and his even shadier kin. Unfortunately, the novel meanders toward a finale that’s more welcome than it is satisfying.

STRAIGHT FROM THE HORSE’S MOUTH
By Meryem Alaoui
Translated by Emma Ramadan
292 pp. Other Press. Paper, $16.99. 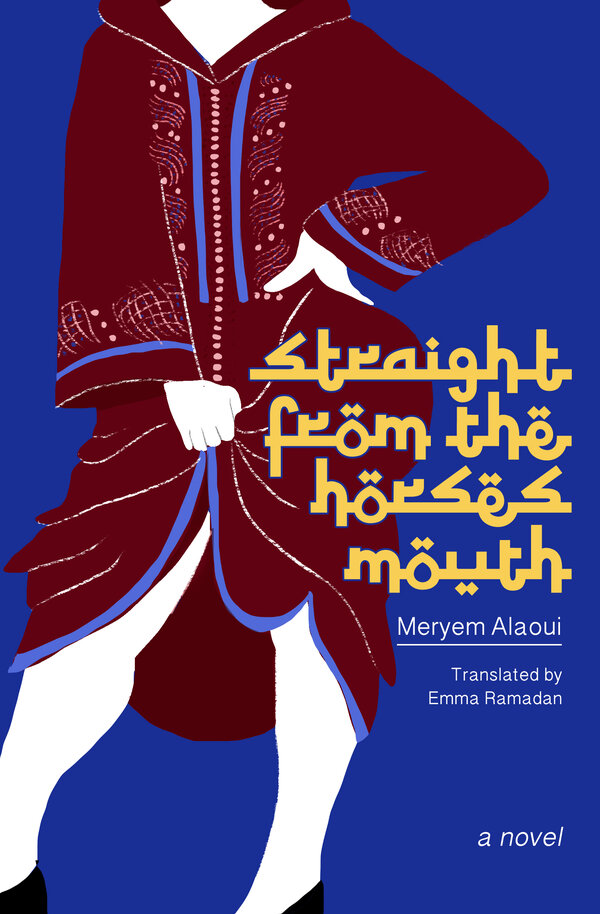 When “Straight From the Horse’s Mouth” opens, it’s 2010 and the 34-year-old Jmiaa has been a prostitute on the streets of Casablanca for 15 years. Her story, in Alaoui’s devastating novel, is at times painful to read — and yet it’s written with such grace and power that it’s impossible to look away.

In Ramadan’s elegant translation from the French, Jmiaa’s voice is both world-weary and street-smart. Her suffering has toughened her to a degree that should never have been necessary. She agrees to temporarily take in one of her pimp’s new employees, Halima, and show her the tricks of the trade.

The histories of these two women and how they took to sex work will break your heart. They share a small apartment, which doubles as their work space, with Jmiaa’s young daughter, Samia. “It’s very rare that she’s there when I bring men home, but when she is, I tell her that they’re repairmen,” Jmiaa says. “For the wooden furniture, the television, the fridge, the windows … whatever.”

Samia soon goes to live with Mouy, her grandmother. When a young filmmaker takes an interest in Jmiaa, her life begins to change in ways no one could’ve predicted. That’s not to say that “Straight From the Horse’s Mouth” is some tale of Eliza Doolittle-like redemption; I’m not convinced Jmiaa ever needed redemption in the first place.

Set in Watergate-era Pittsburgh, Nemerever’s “These Violent Nights” opens with a brief and utterly disturbing prologue that promises an act of violence later in this macabre story. But first it rewinds, to introduce the forlorn 16-year-old university student Paul Fleischer, who’s still mourning the suicide of his father when he falls in love — or something like it — with his suave classmate Julian Fromme.

They make an unlikely pair. Paul thinks of himself as an “ungainly stork of a boy,” and he’s desperate for the attention of a “dark-haired Apollo painted in flowing Botticelli lines” and self-described “half-shiksa trust fund baby who’s never had to work for anything.” Their budding romance is steeped in a shared interest in social psychology and chess, and it finds expression in sexual violence that, even if it starts out consensually, grows discomforting to read. An awkward power dynamic soon develops between them. “If Julian were to love him,” Paul thinks, “it would feel like something he deigned to do. It meant more to be needed.”

Although I had trouble at times following the hairpin turns of their fickle desires and motivations, Julian’s dependency and Paul’s desperation for affection remain constant. When, for example, Julian beckons him from out of town, Paul skips out on his great-grandmother’s shiva. The two of them cruelly goad each other on until they become “monstrous together, merciless, twins conjoined at the teeth.” Nemerever does a crafty job of slowly ratcheting up the tension and guiding us back toward the awful event hinted at in the prologue. Hidden inside “These Violent Nights” is a clever novel of manners that might have been even more exciting than the lurid plot at its steamy center.