We STILL get a kick out of Cole! Cole Porter lived in lavish luxury — and died in total agony. But he wrote songs of such brilliance that we’re still humming them 90 years on

THE LETTERS OF COLE PORTER

Cole Porter was the most debonair of composers and lyricists, emblematic, I always felt, of a perfect dry martini, served straight-up with a twist of lemon peel.

He was responsible for such classics as Miss Otis Regrets, which he said ‘was written at a party just as a joke’, Fred Astaire’s favourite song, Night And Day, which Astaire sang more than 1,000 times, It’s De-Lovely and You’re The Top — ‘I’m a toy balloon that’s fated soon to pop/But if, baby, I’m the bottom/You’re the top!’

To complete the elegant picture, Porter, we are reassured by the editors of this gorgeous book, in public and in private was immaculately attired and ‘always wore a white carnation in the buttonhole of his faultless dinner jacket’. 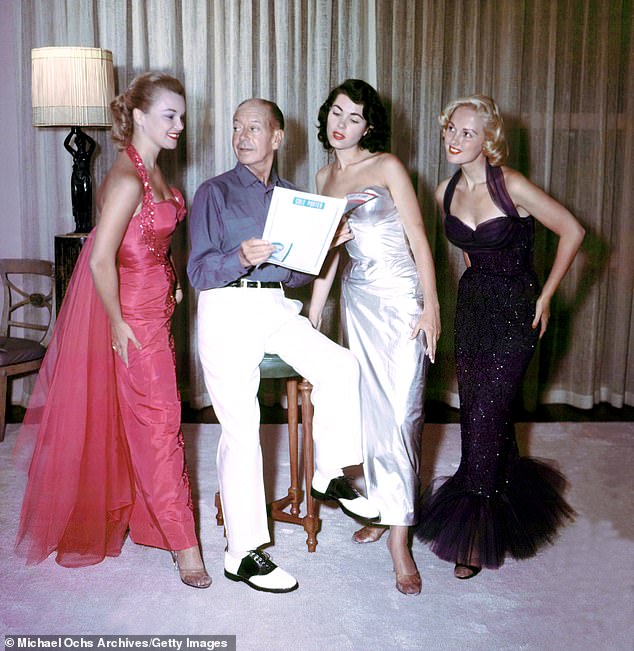 A new collection of letters written by Cole Porter (pictured), details the life of the composer who wrote hits including Miss Otis Regrets and Night And Day

It’s good to know he wasn’t a slob at any stage — but he was perhaps a snob. Porter enjoyed an ‘extravagant lifestyle’ and moved in an ‘elite social circle’, never mixing with anyone who wasn’t of the calibre of Orson Welles, Cary Grant, Ethel Merman, James Stewart and Edward and Mrs Simpson, who visited him in his suite on the 41st floor of the Waldorf Towers in Manhattan.

Porter was born in 1891 in Peru, Indiana. The family was wealthy, owning mines and newspapers, and Porter was sent to Yale in 1909, where, as we might expect, he was remembered as ‘a delicate, rather than a robust, boy’.

He joined the glee club, took lessons in composition from Igor Stravinsky and had a go at writing plays, now lost, which flopped. ‘As they dismantled the scenery,’ said Porter, ‘I honestly believed I was disgraced for the rest of my life.’ He rose above it.

Financially speaking, disaster didn’t much matter. There were always trust funds to keep him afloat (Porter would inherit $551,550 from his mother in 1953 — $5 million in today’s money — by which time he hardly needed it) and so, ‘exuberant, flirtatious and flamboyant’, Porter in 1917 went to Europe to participate in World War I.

Despite the best efforts of our scholarly editors, Cliff Eisen and Dominic McHugh, Porter in battledress remains an obscure episode. He said he’d served as an ambulance driver and had trained with the French artillery, but ‘there is no concrete evidence to back up his assertion’.

Porter wrote to pals that he was joining the American aviation forces, ‘although nobody seems to know in what capacity’.

What we do know is that Porter remained in France, having met divorcee heiress Linda Thomas, eight years his senior, at the Paris Ritz. ‘I lunch and dine with Linda every day, and between times, call her up on the telephone.’ They were married in 1919.

The honeymoon was spent on the Cote d’Azur and the Italian Riviera. They rented a chateau in Antibes, bought a house in Paris which was featured in Vogue — and was sold in 2012 for €40 million. From June until October each year, the Porters resided in a palazzo in Venice on the Grand Canal. Easters were spent in Seville and the Porters went back and forth to New York on opulent ocean liners. 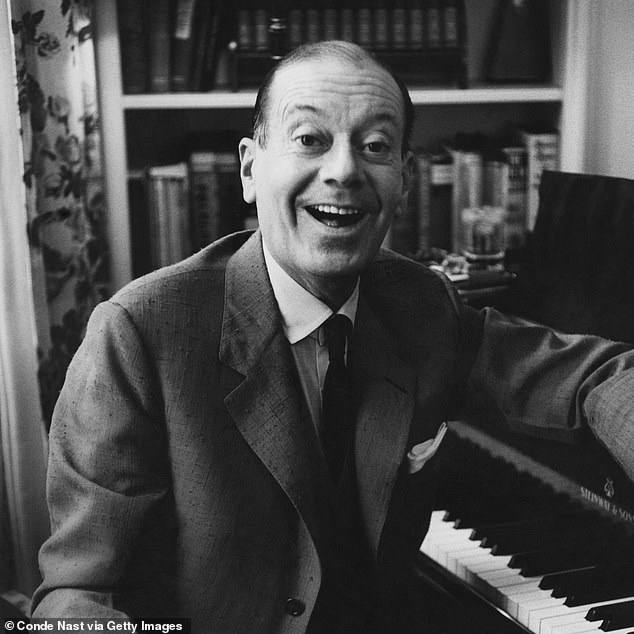 Cole (pictured) would compose his songs by making mental notes in transit, often times his numbers became incorporated in shows

It was a veritable life of luxury. ‘Very few bottles of 1928 champagne are good any more,’ Porter lamented in 1948, ‘and as for 1921, it is so old and flat, people with country places only give it to their pigs.’ Reading these letters, the impression is of a non-stop summer holiday — Fiji, Zanzibar, Madagascar, the Greek Islands, Egypt — ‘a thoroughly indolent, though obviously affluent life’.

Yet Porter became more than a social butterfly. From 11am until four in the afternoon, he was composing his songs, ‘making mental notes in transit, in automobiles, in trains and airplanes’. His numbers were incorporated into miscellaneous shows — Let’s Do It, Let’s Fall In Love; Farewell, Amanda — and royalties accumulated from sheet music sales.

Eventually, with the scripts provided by Sam and Bella Spewack or Comden and Green, there were Porter musicals running for years on Broadway, each acclaimed for their ‘impish lyrics’ and ‘excellent tunes’. Hollywood inevitably paid court — Porter received millions for his rights.

But, as we find out from these letters, he was preoccupied with questions of melody, orchestral arrangements and casting. And what a legacy: Anything Goes, Kiss Me Kate, Silk Stockings, High Society, the latter with Grace Kelly and Frank Sinatra.

Porter’s work was sophisticated, adult, and frankly sexy: I’m Getting Myself Ready For You, Love For Sale (about prostitution), My Heart Belongs To Daddy (a title you certainly wouldn’t hear these days), I Get A Kick Out Of You (originally a reference to cocaine — changed to champagne after complaints).

Too Darn Hot was banned outright by radio networks, as was this couplet: ‘He’ll tell you he’s detained in town on business necessary/His business is the business with his pretty secretary.’

Porter, indeed, had a lot of trouble with the censors, Joseph Breen and the Hays Code, who were always on alert for lewdness and immorality. Yet if every innuendo was suppressed, Porter would have been silenced. It helped his cause that Fred Astaire, his great interpreter, always seemed somewhat chaste.

Anything Goes, for example, is thoroughly saucy: ‘When maiden aunts can freely chuckle/At tales much too near the knuckle/The facts disclose/Anything goes . . .’ 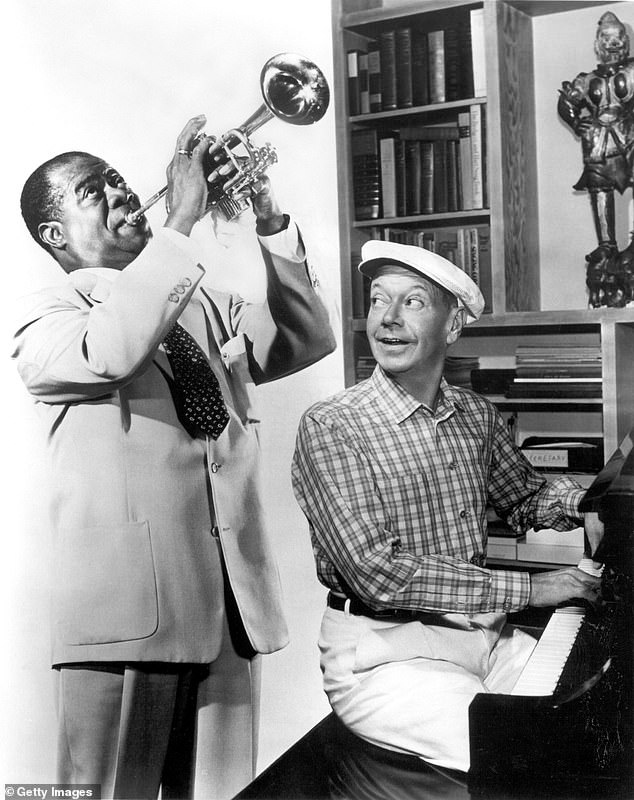 Cole (pictured with Louis Armstrong) survived his wife Linda Thomas by a decade, he reported in 1925 that she had problems with her left lung and stomach bloating

If puritanism was one problem, the chief cloud hanging over Porter was ill health. In 1937, out riding, his horse shied and threw him, and fell on his legs, both of which sustained compound fractures.

Porter was in agony for the rest of his life, enduring many operations. ‘The right leg was mashed to a pulp below the knee to the ankle,’ he told a friend. ‘A great many of the nerves were injured.’

The limb became ulcerated. ‘The whole leg looked like a flowing mass of lava and it made me sick.’ 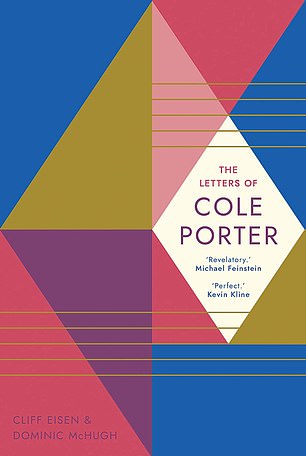 Pressure from a sheet or blanket was ‘like lightning bolts’. Porter was prescribed morphine, which ‘did nothing toward diminishing the pain’. In 1945, the left leg was surgically re-broken, the jagged ends and scar tissue removed, the Achilles tendon spliced and marrow scooped from the tibia, to prevent the spread of infection.

‘While this was going on, I had two serious nervous breakdowns and lost 25lb.’

Meanwhile, Linda had proved to be a permanent invalid. ‘Her left lung is seriously affected and her stomach is very bloated,’ Porter reported in 1925.

She had emphysema, colitis and broke a rib coughing too hard. She retreated to the Massachusetts countryside and had to sleep in an oxygen tent. She died in 1954.

Porter survived her by a decade. His right leg was amputated in 1958, as it was prone to recurrent abscesses. It all sounds so sad. ‘No one wants you, Cole,’ he was told, as the Sixties dawned. ‘They think your tunes are old-fashioned.’

He died in seclusion. ‘He was desperately ill and did not recognise anyone.’ Porter was actually America’s Mozart.

Spoilers: Sex shock as Emma and Alina embark on affair in Corrie?