Bruce Pascoe is a disarming man. He is reserved and charming, dedicated to his family, his writing and his goal of re-educating Australians about our history. He tells me he has squeezed our conversation in between meetings for Black Seed Food, his family-run company that seeks to demonstrate the commercial value of the Indigenous produce explored in his 2014 book, Dark Emu. 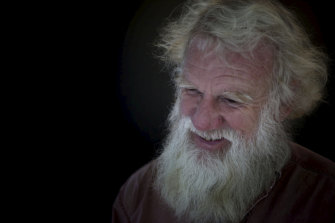 Bruce Pascoe says if you are a real writer you should be writing every day.Credit:James Alcock

I get the feeling Pascoe is reserving judgment on me, waiting to see if I ask questions worthy of his time away from his work.

Pascoe is of Bunurong and Yuin descent. He is an awarding-winning writer, editor and, more recently, historian. He has always combined his writing craft with other careers, and in his time has worked as a teacher, farmer, fisherman, lecturer and Aboriginal language researcher.

He has been writing for almost four decades, and while he achieved critical success in that time it was Dark Emu that brought him to centre stage. In 2018 he was named Person of the Year at the Dreamtime Awards and awarded the Lifetime Achievement Award by the Australia Council. This year is proving no less significant for the septuagenarian. He has released two works – Young Dark Emu: A Truer History and this month Salt: Selected Stories and Essays.

Neither of these can be separated from Dark Emu. Young Dark Emu, as its title suggests, is the same work adapted for a primary-school audience, and some pieces in Salt were written during the writing of Dark Emu.

It seems appropriate at the start to ask Pascoe about his impulse to write. Perhaps it is an unexpected question as he breaks into a smile.

As for Dark Emu, he says: "I have faith in the story. In Western literature, audiences tend to celebrate the author. In Aboriginal literature, we celebrate the story. I just happen to be telling it at the moment, but I'm doing everything in my power to make sure there are other people to tell this story."

And telling the story he is. Pascoe is driven to dispel the colonial myths that most of us were taught in school. In Dark Emu he shares the evidence from the diaries of early explorers and demonstrates the advanced food production and land management of Aboriginal civilisation. In Young Dark Emu he brings this message to the next generations. There is also a Dark Emu in the Classroom, a resource for secondary-school geography teachers.

But what drives him to go beyond the original Dark Emu. Why is one book – a highly awarded one at that – not enough? 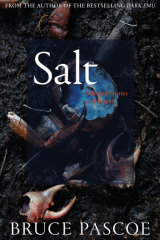 "I went to a school in Western Australia last year. I was early for the session I was going to give, and I went into the library to see what was there. And I found nothing. Not one book on Aboriginal Australians.

"I imagined a 13-year-old Indigenous girl set an assignment on Australian history. What if she chose to do it on her grandfather's people? What would be there to support her? There would be nothing. What would that girl think about that school, that town and the history of her own people? I was devastated. So, when we wrote Young Dark Emu, one of the people we wrote it for was that 13-year-old."

Even though "the Emu", as Pascoe calls it, consumes his time, he is doing other writing. I turn the conversation to Salt and ask what prompted his latest collection.

"Because I've been so distracted by Dark Emu and the need to talk to Australians about history and agriculture, I haven't been deeply involved in my craft, writing. But I've still been writing stories, and my family told me I should think about a collection … So that's what I did."

One story in Salt, Temper Democratic, Bias Australian, is particularly striking. The piece was first published in Meanjin in 2018 and holds Australia's publishing industry to account for failing to engage with Aboriginal history.

I ask him to read a passage aloud for me, and he humours me by doing so. He reads beautifully, although the words leave me bereft. Like so much of his work, this is an essay asking us all to consider the "extent of the fraud" built into our history books.

His goal was to give a platform to new writers to demonstrate their potential, as well as showcase experimental works by more established writers. Through Australian Short Stories Pascoe published Gillian Mears, Ruby Langford Ginibi, Elizabeth Jolley, Helen Garner, Tim Winton, Carmel Bird, Manning Clark and Kate Jennings, among others.

Looking back, Pascoe says he published Australian Short Stories "to give other people a voice … but what started out as an ambition become a sacred duty and a responsibility".

Which leads to an obvious question, but one that he has written about previously. Has he, as an Aboriginal writer, found it difficult to be published in Australia? And if so, has he ever felt silenced by the industry?

He is clear. "Yes, I have … I began getting published in the 1970s. It was a lot easier than today … But after people realised I was writing from an Aboriginal perspective and that I am in fact Aboriginal – because I don't look Aboriginal and because it took me a good 20 years to actually be able to write down the family tree – I felt the publishing industry towards the end of the 1980s turned away from me. Some in the publishing industry said some pretty insulting things racially. I have retained those documents. And that hurt, but it became apparent that I was being sidelined."

Sitting opposite him, it's hard to imagine Pascoe being sidelined. With Dark Emu, Pascoe has done what few have managed to do. He has – he continues to – challenge how we as Australians understand our country, both its past and its future.

Does he see Dark Emu, which has turned into both a personal mission and a commercial enterprise, as is his legacy? He is adamant he does not.

I've got some good stories to tell and I would like those to be my legacy.

"I hope not. Dark Emu is not my story. I wrote it, but the story was always there. It is Australia's story. That's is why I dedicated it 'to the Australians'. I don't want that to be my legacy. I'm a fiction writer, a storyteller. I've got some good stories to tell and I would like those to be my legacy."

Pascoe says his next project is to complete a story he started writing nearly two decades ago. Talking about it brings about a change in his demeanour changes – he relaxes and leans forward.

"I've been struggling to finish it because of all the work with Dark Emu. I've been with it for 15, 20 years. As every writer knows, if you leave something on the desk for six months and don't go back to it, by the time you are ready to go back vast changes will be needed. This novel, Imperial Harvest, has probably been rewritten seven times.

"The impulse for Imperial Harvest was the awful realisation about the reliance of Western society on war and what it does. You know, we have these great ideas … And then we send young people off to war. Where does that violence in the Western mind spring from? I am trying to answer that question. This is a book about war, someone damaged by war, and the awful consequences of violence."

Pascoe is eager to return to work. Writing is his craft, but a day of meetings for Black Seed Food is the priority.

Pascoe leaves me with advice for younger writers.

Bruce Pascoe is a guest at Melbourne Writers Festival, August 30-September 8 (mwf.com.au).
Salt: Selected Stories and Essays is published by Black Inc. at $34.99. Young Dark Emu: A Truer History is published by Magabala Books at $24.99.