NASHVILLE — Although the purpose of this conversation is to promote her new novel, “The Dutch House,” Ann Patchett is in no great hurry to talk about herself.

“I think this book could really save the world,” she says, holding up “The Resisters,” by Gish Jen, which is scheduled for release next year. Patchett ordered a big box of advance copies and has been giving them to everyone she knows.

“It’s about baseball, and it’s presented in such a calm, natural way, and I think it’s particularly wonderful,” she says.

It is a hot day in late August, and it is getting toward lunchtime. In addition to discussing literature by other people, Patchett, 55, has collected me from my hotel and driven me to Parnassus, the dog-, children- and free-coffee-filled bookstore she co-owns with Karen Hayes.

She has peppered me with questions about my weekend plans and my domestic situation. She has discussed with the store manager the vexing problem of Goober, a Bernese mountain dog who comes to work with an employee and whose sweetly lazy disposition does not make up for the fact that wherever he goes, a trail of drool follows. She has suggested books that I might like and attempted to prevent me from paying for them.

[ “The Dutch House” is one of our most anticipated September titles. Read more about it and the other 16. ]

Now we have reached her house and been greeted by Sparky, a small black-and-white shelter dog who also “works at the bookstore,” as she puts it, and lunch is on the table — various foods purchased by Patchett’s husband, Karl, from the local farmers’ market. (Alert readers will recognize Karl from Patchett’s book of essays, “This Is the Story of a Happy Marriage.”) 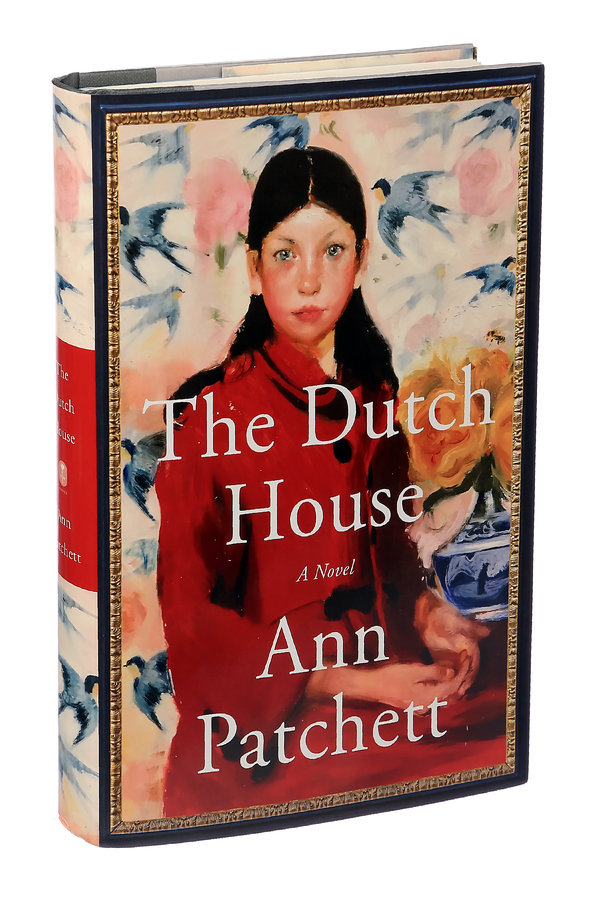 It seems like a good time to discuss “The Dutch House.” Her eighth novel, it tells the story of Danny and Maeve Conroy, siblings who are haunted by loss — of their parents, their home and their understanding of the past. Like other Patchett books, including “Bel Canto” and “Commonwealth,” it is deeply rooted in the peculiar specifics of its characters but feels universal in its themes.

If “Commonwealth,” which explores the collateral damage done to children by their parents’ divorces and remarriages, was semi-autobiographical, then “The Dutch House” is in one respect almost anti-autobiographical, a cautionary tale. Patchett began to play with that idea after interviewing Zadie Smith about Smith’s novel “Swing Time” at an authors’ event.

“It hit me that autofiction is not about what happened to you,” Patchett says. “It’s about what you’re afraid might happen. I began to write a book about the kind of stepmother I am afraid of being.” (This is the wicked Andrea, who marries Maeve and Danny’s father.)

Patchett began work on “The Dutch House” in 2016; two years later, she threw her draft away. “It was horrible to write,” she says cheerfully. “It was like Thelma and Louise going over a cliff. I made so many errors in judgment.”

She switched from first person to third, but that didn’t help. “I thought, ‘This is like death,’” she says. “But actually it was like burning a cake. I thought, ‘I’m going to stand here in the kitchen and eat these little fluffy things and throw everything else out and make it over again.’”

It was getting to the end of 2018. Patchett had just a few months left before her no-going-back deadline, and like an unruly toddler, the book would not behave. She pulled it together with help from a number of friends, all writers themselves.

From Barbara Kingsolver, Patchett got the idea to change what happens to the children’s mother. From Nell Freudenberger, she got the recommendation to read the works of Kate DiCamillo, author of “Because of Winn-Dixie,” with whom she began an email friendship — and who then suggested a new ending.

And from Jane Hamilton, to whom she always reads drafts of her books aloud (and vice versa), she received the gift of tough love. “She said, ‘I really like it, but the whole third section is trash,’” Patchett recalls. “Well, not trash, but she said there were major problems. So I had to rethink a lot of stuff.”

This is the sort of thing that happens when novelists get together, Kingsolver says. In her case, she was staying with Patchett in the midst of a long book tour. When she asked how the new book was going, “Ann made this miserable face, and I said ‘O.K., let’s talk,’” Kingsolver said via email. They stayed up late into the night.

“As it happened, I have a friend whose mother had done the very thing that Ann’s fictional mother had done in her book, which seemed completely implausible to Ann,” Kingsolver said. “I talked about the circumstances as I understood them, and what had led to this unusual family trauma. How elements of it might be useful in a story. I remember it as a fun conversation — taking apart a fictional engine and pondering how it might go back together. For some of us, that’s the definition of a good time.”

Born in Los Angeles, Patchett and her sister moved to a farm in Memphis after their parents divorced and their mother remarried. (Their father, a police officer, was an inspiration for the father in “Commonwealth.”) Their stepfather had four children of his own, which made for complicated interfamilial relationships. Eventually, Patchett’s mother would divorce him, too.

Patchett has two stepchildren with her husband but has never had a burning desire to be a mother. Among other things, that gives her more free time in the day. “I never thought for a moment I could have it all,” she says. “Either I could have children, or I could write.”

But she has deep connections to an extended family that includes friends; book people; her mother and sister, who live nearby; and Karl, whom she began seeing after her brief first marriage collapsed. They dated for 11 years before making it official.

“If I’m getting married again, and I said I never would, then I’m all the way in,” she recalls telling him. “There’s no halfway. And if you ever leave me, look in your rearview mirror, because I’m coming for you.”

Patchett is not big on technology — no Twitter, no Instagram, no TV. She bought a new cellphone after her 15-year-old flip phone was recalled by the manufacturer, and she uses it mostly to call Karl when she is on the road. People who text her should know that she will not be texting them back. Callers who are not Karl are often treated to an outgoing messaging announcing that “I do not know how to access these messages,” she says.

What she likes most, really — besides her house, her husband, her family, her dog, her friends and her writing — is Parnassus.

“All we want to do is read and talk about books and wear flip-flops,” she says. “I’m really glad we have this place together where we can go. We’re like the guys from ‘Cheers’ who sit at the bar.”

Parnassus is about to confront an unpleasant turn of events: the arrival of an Amazon brick-and-mortar store in the nearby mall. Patchett is trying not to let it unnerve her. She sees promoting books and bolstering the publishing industry as part of her job.

She’s an ambassador for the Book Industry Charitable Foundation, which helps bookstore employees who encounter financial hardship. She welcomes other authors to her store and has raised the art of the public literary conversation — writers interviewing writers about their work — to a new level. “I want to be part of the ecosystem that keeps our industry alive,” she says.

After the interview, Patchett takes me back to my hotel, pointing out the Nashville sights. “Call if you need anything,” she says, “or if you get in trouble with the police or have an adverse anaphylactic reaction!” (That last remark is very probably an allusion to “Commonwealth.”) And then she drives away.

Sarah Lyall is a writer at large, working for a variety of desks including Sports, Culture, Media and International. Previously she was a correspondent in the London bureau, and a reporter for the Culture and Metro Desks. @sarahlyall