THE DUTCH HOUSE
By Ann Patchett

It takes guts to write a fairy tale these days. No P.R. blurb is complete without the descriptors “searing,” “probing,” “challenging” or the like. The use of destabilizing narrative techniques (which often force critics to either include spoilers or to be oblique in order to avoid them) is so prevalent as to seem almost de rigueur. At a moment when everything in the world feels on the verge of falling apart, there seems to be a widespread cultural expectation (in the West, anyway) that serious art — the kind worthy of respect, in books, television, film or theater — is gonna make you sweat, that it should make you sweat.

Ann Patchett doesn’t want to make you sweat. She wants to make you care. As she explained in a 2016 profile in The Guardian, “I’ve been writing the same book my whole life — that you’re in one family, and all of a sudden, you’re in another family and it’s not your choice and you can’t get out.” In “The Dutch House,” the family is built both by blood and by love. And isn’t that what fairy tales are made of? This novel takes a winding road through the forest and doesn’t rush to a finish, nor is the ending wholly surprising. But if you allow yourself to walk along with Patchett, you’ll find riches at the end of the trail. And you won’t end up shoved into an oven.

I make the Hansel and Gretel reference deliberately. “The Dutch House” is a sibling story — that of Maeve and Danny Conroy, a brother and sister growing up comfortable in Elkins Park, Pa., in a house known throughout the community (and by the family) as the Dutch House, in homage to the Netherlands-born VanHoebeeks, the previous owners. The children’s father purchased the house for his wife without telling her before the children were born — it is enormous, wildly elaborate, stuffed with the ornate furniture and outsize presence of the VanHoebeeks. Though they are dead, they are looming spirits — the Conroys never even take down the VanHoebeek portraits. Here’s Danny, the novel’s narrator, on those paintings: “Mr. and Mrs. VanHoebeek, who had no first names that I had ever heard, were old in their portraits but not entirely ancient. … Even in their separate frames they were so together, so married, I always thought it must have been one large painting that someone cut in half.” It is in front of those paintings that the novel begins: “The first time our father brought Andrea to the Dutch House, Sandy, our housekeeper, came to my sister’s room and told us to come downstairs. ‘Your father has a friend he wants you to meet,’ she said.”

[ Patchett once told The Times, “After I read ‘Charlotte’s Web,’ I became so obsessed with pigs that my stepfather got me one for my ninth birthday.” ] 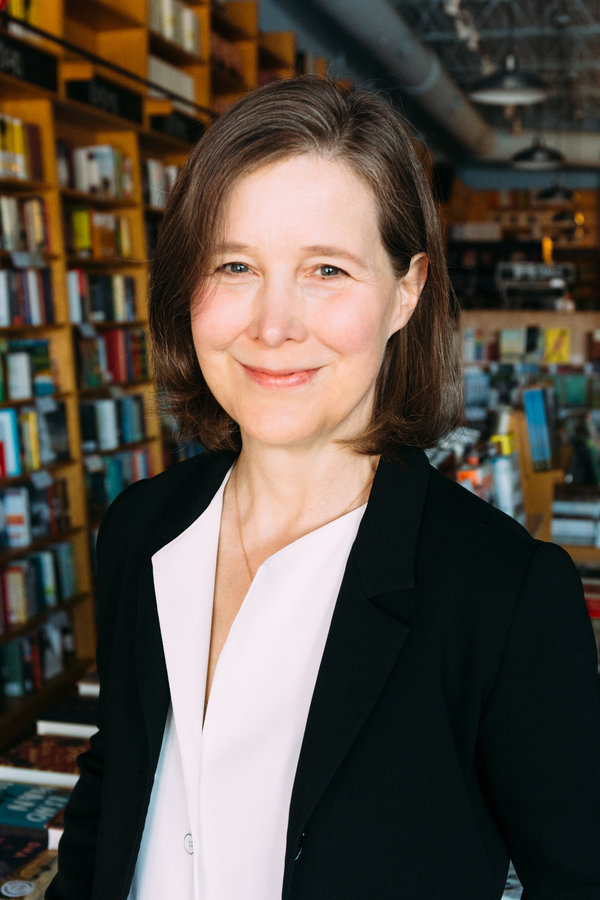 While this seems innocuous, the reader gradually finds out that Danny and Maeve’s mother has disappeared without a goodbye on a quest to India to help the poor there, that the children are lovingly cared for primarily by Sandy and her sister, Jocelyn, who works as the family’s cook, and that their father’s friend, Andrea, is going to end up, yes, as Danny and Maeve’s evil stepmother. She even comes equipped with two girls, Norma and Bright, who will become stepsisters to Danny and Maeve — although it turns out that they are sweet girls under their mother’s unkind sway.

Patchett pulls this off both through her conviction and through her willingness not to wink at or be coy about what she’s doing. There are even direct references to well-loved childhood classics. Here’s Maeve when she’s banished from her beautiful bedroom so that Norma can have it: “It’s just like ‘The Little Princess!’ … The girl loses all of her money and so they put her in the attic and make her clean the fireplaces.” (She tells Norma: “No big ideas for you, Miss. I will not be cleaning your fireplace.”) The power of fairy tales is the way in which they grapple with some of the verities of human life — kindness and cruelty, love and hate. So it is in this novel, which, like Patchett’s 2016 novel, “Commonwealth,” covers many years — from Danny and Maeve’s childhood to their middle age.

Unlike a fairy tale, “The Dutch House” is peopled not with archetypes but with distinctive and believable characters. We hear the story from the first-person perspective of Danny, a stubborn, sometimes clearsighted, sometimes oblivious guy. His descriptions of Maeve, who is seven years his senior, are precise and vivid — though she’s not the narrator, she’s the heroine, fighting off every foe and sacrificing over and over to assure Danny’s happiness. It’s a rare novel that examines the experience of a close and dependent brother-sister relationship — far more often, we see tales of same-gender siblings. If sometimes Maeve and Danny seem a little too good to be true (Do they never argue? Does she never just get sick of him? Does he never feel suffocated? Hmm), their devotion is also quite moving. Here they are when Danny is 12 and Maeve a 19-year-old Barnard student: “Leslie, her roommate, had gone home for Easter break and so I slept in her bed. The room was so small we could have easily reached across the empty space and touched fingers. I slept in Maeve’s room all the time when I was young, and I had forgotten how nice it was to wake up in the middle of the night and hear the steadiness of her breathing.”

“The Dutch House” is also a novel about affluence — about having it, losing it and then getting some of it back. After their father’s sudden death, Andrea evicts Maeve and Danny (he’s allowed to grab one suitcase) along with the family’s beloved retainers, Sandy and Jocelyn. They spend the rest of the book mourning the loss of the house and of most of their money (though Danny has a trust fund that Maeve urges him to burn through) even as they go on to make functional lives, in Danny’s case a prosperous one in real estate, just as his father did. This sounds annoying, even infuriating recounted in this bare-bones way — to be honest, I was a little surprised that it didn’t bug me. But Patchett artfully avoids the stumble of asking for pity for a bunch of well-off white people. The job of a novel like “The Dutch House” is to sweep you along and make you care about the characters, no matter who they are or what their circumstances, and Patchett has done that job.

[ In their By the Book interviews, Michelle Obama, Richard Powers, Anne Lamott, Roxane Gay and Jacqueline Woodson all recommended books by Ann Patchett. ]

There are very few sharp edges in this novel beyond Andrea’s central villainy and I periodically found myself wishing for a narrative that was, if not searing, a little less smooth — though to be fair, the Conroys suffer grief and loss beyond the financial. That said, what I (occasionally) wished for isn’t what Patchett was trying to achieve. The heroes and heroines of fairy tales face mighty challenges but they almost always make it through in the end. In “The Dutch House,” all’s well that ends well — and that’s a pleasure.

Martha Southgate is the author of four novels, most recently “The Taste of Salt.” She is entering her second year in the M.F.A. in playwriting program at Brooklyn College.