NEVER HOME ALONE
From Microbes to Millipedes, Camel Crickets, and Honeybees, the Natural History of Where We Live
By Rob Dunn
Illustrated. 323 pp. Basic Books. $30.

A young man I know used to say that humans have no need to bathe, since our hair and bodies are designed to self-cleanse. I would fight him on it, being of the opinion that washing up occasionally was good for us — and for the people with whom we lived. But now, after reading the entomologist Rob Dunn’s description of the myriad microbial life-forms that take up residence in a typical American showerhead, I’m starting to think maybe that young man was onto something.

With an army of collaborators, Dunn, a professor of applied ecology at North Carolina State University, took samples of the gunk inside hundreds of showerheads, and found a profusion of microbial fauna. Tap water itself, he writes in the chatty, informative “Never Home Alone,” teems with amoebas, bacteria, nematodes and crustaceans. As the water passes through the showerhead, these microbes lay down a kind of scaffolding known as biofilm to protect themselves from getting washed away with every ablution. They make the biofilm “out of their own excretions,” Dunn writes bluntly. “In essence, by working together, the bacteria poop a little indestructible condominium in your pipes.”

It gets worse. Filtered through that poop-biofilm, the water that washes over you, as you supposedly scrub yourself clean, might contain not only all those harmless amoebas and nematodes but a few bacteria that can be dangerous — in particular some species of Mycobacterium, cousins of the Mycobacterium that causes tuberculosis. And the pathogens are there because we provided the perfect breeding ground for them, when we tried to purify our tap water in the first place. Municipal water treatment plants use chlorine and other chemicals that kill off the bacterium’s natural predators, allowing Mycobacterium to thrive. Tap water that comes from a well, in contrast, has never gone through a treatment plant and has a rich microbial life. It might look more dangerous, but it’s actually safer, Dunn explains. All those organisms in well water are themselves harmless, and they tend to fight off the potentially dangerous ones like Mycobacterium — that’s how biodiversity works.

News from the showerhead biome is just one part of this fact-filled, occasionally disgusting, slightly alarming book. Dunn has been involved in an obsessive quest to document the tiny inhabitants of indoor environments, a project that involves teams of professional and amateur bug-watchers to take samples not only from showerheads but from door frames, refrigerators, hot water heaters, cellars, toilets, pillowcases, all sorts of surfaces from the places we call home. These workers swab and seal, swab and seal, and send their thousands of samples to Dunn’s lab in Raleigh, or to his other lab at the Natural History Museum of Denmark, for an ongoing microbial census.

“We expected to find a few hundred species,” Dunn writes of his first foray into indoor microbe-hunting, which involved 1,000 homes from around the world. Instead, he and his colleagues found a “floating, leaping, crawling circus of thousands of species,” perhaps as many as 200,000, many of them previously unknown to science. 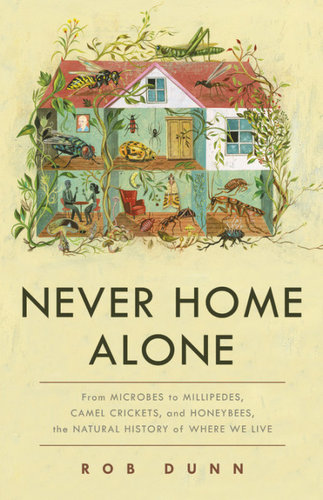 These denizens of interior spaces are our most frequent companions. In the industrialized world, we spend upward of 90 percent of our time indoors. Luckily, most of our co-habitators are either benign or actually beneficial in some way, like the house spiders that keep down indoor populations of flies or mosquitoes that can carry disease. But because we’ve become so hyper about making our surroundings as pristine as possible — sealing off our homes from the outdoors and using pesticides and antimicrobials with a vengeance — we’ve tipped the scales away from those harmless or helpful bugs, in favor of some of the bad guys.

According to Dunn, indoor microbes are among the fastest-evolving species on the planet; they have an uncanny ability to live in ecological niches you could hardly imagine existing, like the dead skin cells we slough off every day (which is all that’s needed to survive for a class of bacteria known as detritivores). They manage to evade our assaults, and evolve their way out of just about every biocide we throw at them. We’re left to contend with the consequences of our own warfare, such as pesticide-resistant German cockroaches and bedbugs, and antibiotic-resistant MRSA bacteria. We have turned a relatively harmless indoor biome into something that can make us sick.

I’m not quite as enamored of our microbial roommates as the author is. (I’m sorry, Professor Dunn, but I’m just being honest here: Those photos of the camel cricket and the American grass spider clinging to basement pipes and door thresholds — well, yuck.) It probably takes the soul of an entomologist, or maybe of a 9-year-old child, to love these bugs as much as Dunn does. Still, it’s hard not to be occasionally charmed by his prose, as when he catalogs the arthropods with whom we share our homes: “biting midges, mosquitoes, lesser house flies, phantom midges, freeloader flies and shore flies. This is not to mention fungus gnats, moth flies and flesh flies. Or crane flies, winter crane flies and minute black scavenger flies.” And it’s hard not to share, at least a little, his awe at their diversity, even in a single household. “If you see two flies in your home,” he writes, “the odds are that they are two different species. Heck, if you see 10 flies in your house, they are likely to be five different species.”

There’s a real sense of “gee-whiz” in this book, but it’s mostly in service of Dunn’s overarching goal: to preach the preservation of biodiversity, not only in the lush forests and streams that fit our traditional image of nature’s abundance, but in the most humble places, too, where the vast majority of us will have most of our cross-species encounters — our basements, mattresses, refrigerator drawers and showerheads.

About those showerheads: Dunn isn’t suggesting that we give up showers. But he does say we might want to change the showerhead a little more often — and consider switching from metal to plastic, where biofilm is less likely to accumulate. Nonetheless, his bottom line for showerheads is like his bottom line for other aspects of the roiling microbial mix we live in: Don’t be afraid of letting life inside. “The water that is healthiest for bathing is that which comes from aquifers rich with underground biodiversity including crustaceans,” he writes. “The crustaceans in these aquifers are an indication not of the dirtiness of the water but of its health.”

Robin Marantz Henig is a New York science journalist whose books include “The Monk in the Garden: The Lost and Found Genius of Gregor Mendel.”