In search of something good to read? USA TODAY’s Barbara VanDenburgh scopes out the shelves for this week’s hottest new book releases. All books are on sale June 8.

What it’s about: In 1933 Kentucky, Carol was 13 when her daddy lost her in a game of cards – and thus begins the epic saga, spanning decades, of one rural family’s struggle to survive and the invisible connections that bind.

The buzz: “This well-crafted and often serendipitous saga recognizes that family cannot be escaped but can be expanded,” says Kirkus Reviews. 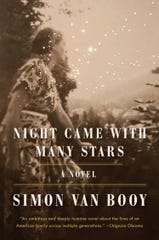 2. “The Ugly Cry: A Memoir,” by Danielle Henderson (Viking, nonfiction)

What it’s about: The author movingly recounts being raised by her grandparents in overwhelmingly white upstate New York after being abandoned by her troubled mother. With the help of her grandmother’s ferocious love, she learns to have faith in herself.

The buzz: “A redemptive memoir about a Black woman’s victory over childhood abuse, racism, and mental illness,” says Kirkus Reviews.

What it’s about: On Jan. 28, 1986, NASA’s space shuttle Challenger exploded. What really happened that ill-fated day? Cook revisits the tragedy, centering the story on Christa McAuliffe, America’s “Teacher in Space.”

4. “¡Hola Papi!: How to Come Out in a Walmart Parking Lot and Other Life Lessons,” by John Paul Brammer (Simon & Schuster, nonfiction)

What it’s about: A humorous memoir in essays from the popular LGBTQ advice columnist on growing up a queer, mixed-race kid in America’s heartland, and becoming “Chicano Carrie Bradshaw.”

What it’s about: In the tiny town of Bourne, the lives of the teenage Mitchell triplets are upset when a chemical company responsible for a horrendous spill years before threatens to reopen the plant. The girls take on a system stacked against them.

The buzz: “Readers will be captivated by this story of adversity and resilience,” says Publishers Weekly.

Review: Clint Smith reckons with America’s racial history in necessary ‘How the Word Is Passed’